- There is considerable event risk present in markets at the moment: Tonight brings us the expected decision from MSCI regarding inclusion of Chinese equities in their emerging markets index; tomorrow brings FOMC followed by BoJ, and Brexit is next Thursday (June 23rd).

- Global equities continue to show bearish price action as we move into FOMC. The big question is how dovish the Fed might go; and with only two dots left for 2016 (expected rate hikes disclosed in the last dot plot matrix), they have little room to operate.

In yesterday’s article, we looked at a few initial signs of risk aversion showing ahead of heavy docket of data over the next two weeks. Later tonight (ET, Wednesday morning in Asia), the decision from MSCI is expected as to whether or not to include China’s A-shares in its Emerging Markets Index. This can be a big deal for China, as capital flows from being a part of that index can help to bring strength back into the Chinese equity market. Tomorrow brings the Federal Reserve’s next rate decision followed by the Bank of Japan’s rate decision later on Wednesday night in the US (Thursday morning in Asia); and next week brings the Brexit vote. So there are quite a few key risk factors that markets will have to contend with over the next couple of weeks.

Thus far on the week the response in equities hasn’t been very positive. But if history is any guide, such as what we saw on February 11th, that can all change very quickly with one carefully-worded statement from the Federal Reserve. As we saw in February, Chair Yellen helped to turn-around a brutal theme of risk aversion that had hit across global markets, and that theme of expected dovishness lasted all the way until May when various members of the Fed began talking up the prospect of 2-3 rate hikes for the rest of the year. This implied hawkishness did bring rate expectations higher along with the US Dollar, but pressure had begun to mount in equities as the probability of the Fed further tightening policy made for a less encouraging backdrop for global equities.

As we head into tomorrow’s FOMC announcement, it’s important to remember that these Fed meetings can inspire market moves in both direction as we’ve seen in the very recent past. In September, we saw how the Fed’s ‘hawkish hold’ only seemed to inspire even greater risk aversion despite the fact that the bank avoided a rate hike; and in March we saw risk trends extend higher after the Fed reduced their expectation for rate hikes this year to two from the previous read of four.

Below, we’re looking at four of the more interesting setups across global equity markets as we move into this bevy of data.

We talked about the divergence being seen in the Nasdaq 100 and the S&P 500 in yesterday’s article. With the tech-heavy Nasdaq 100 seeing more bearish qualities than the S&P, the prospect of a bigger move of risk aversion may be looming ahead.

Price action on the Nasdaq 100 has just driven down to another Fibonacci level of interest at 4,404. This Fibonacci retracement can be found by taking the November high to the February low, and the 38.2% retracement of that move is current support on the index. The 23.6% retracement of that same move had offered the prior ‘swing-high,’ which had also intersected with a projected trend-line while setting a ‘lower high.’ So there are numerous bearish qualities in this setup at the moment. Traders that aren’t short already would likely want to wait for more information before loading-in to the trade. 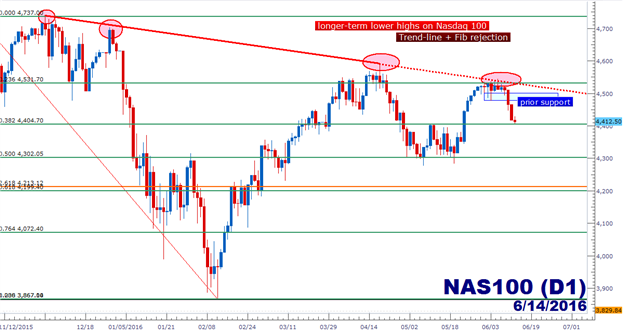 While German Bunds have moved to negative yields, driven by rampant buying demand which is being driven by an out-sized ECB bond buying program; German stocks have taken a drubbing. This setup is perhaps even more bearish than the Nasdaq 100 setup we looked at a moment ago, because while the Nasdaq has been working on ‘lower-highs’ since November of last year, the DAX has been putting in lower highs for 14 months now. This price action has created a relatively clean channel, and the range of that channel produces a Fibonacci retracement that’s seen numerous support and resistance inflections over the past four months.

This setup is similar to the above Nasdaq setup in the fact that both are bearish markets with price action currently at support. Traders shouldn’t look to sell whilst at support unless they have a really good strategy to manage the risk of doing so (speaking mainly of breakout strategies, and even then, it can be difficult to do). Rather, traders can look for that next ‘lower-high’ before looking to sell, and the prior zone of price action support could be an attractive zone to look for such an entry. This zone, indicated in blue on the below chart runs from approximately 9,750-9,850. 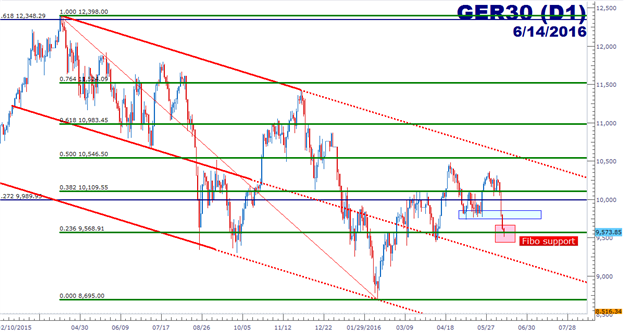 French equities are looking perhaps even more bearish than their German counterparts. On the chart below, we’re looking at the monthly FRA40 chart, and notice the long-term symmetrical wedge that’s been building for the past 15 years, highlighted by lower-highs at resistance and higher-lows as support. And just like the DAX setup above, we can draw a Fibonacci retracement through this range to find a series of levels that have provided numerous support and resistance inflections.

Going into tomorrow’s data, the CAC40 finds itself supported on the 61.8% Fibonacci retracement of this move, as well as long-term trend-line support (on the bottom side of the wedge). 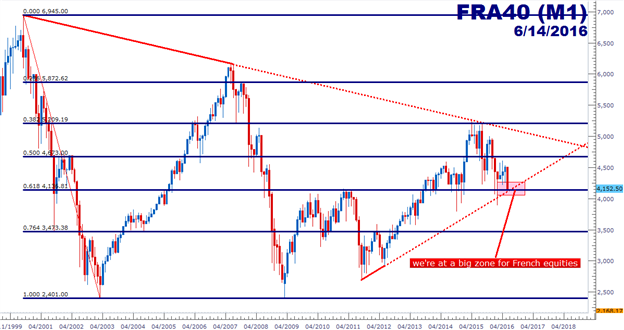 It’s been a brutal month for Japanese stocks, and this extends a bout of weakness that ties in very strongly with the volatility that’s been seen in Chinese markets; beginning in last June but really getting started in August of last year. And while Japanese stocks did set a low around that same February 11th inflection point seen in many other equity markets, the bounce was fairly short-lived and sellers merely used that rip higher to sell at better prices.

The past two days have seen a break below a bear flag formation based off of that February low. There is a Fibonacci support level at 15,616, and this could offer near-term support in the Nikkei. 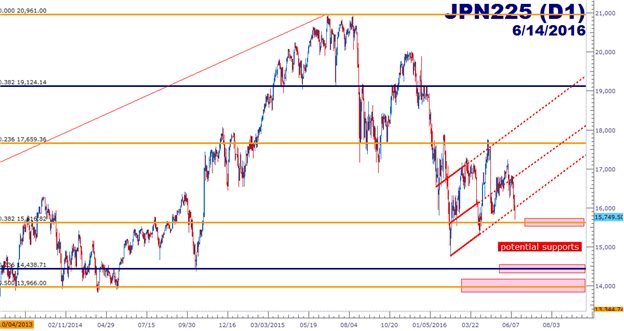