EUR/USD, USD/JPY: Which Will Break First?

- Even more Fed-speak indicating hawkishness has continued the drive higher in the Dow Jones FXCM Dollar Index, and this has brought to question two previously strong trends in EUR/USD and USD/JPY.

- While USD Strength is showing in many pairs, the prospect of an even stronger Yen could make for attractive short-side resumption strategies in USD/JPY, and we outline technical levels for such an approach below.

The US Dollar rally continues: US Dollar strength has continued as the Greenback has carved out higher-low support off of the 11,960 level that we had pointed out on Friday. This is the 61.8% retracement of the prior major move, and for the past 10 days, this has been a key level in USD.

Even more hawkish Fed commentary to open the week have helped to solidify this support, with the most recent comments coming from the president of the San Francisco Fed, Mr. John Williams, saying that 2-3 hikes in 2016 with 3-4 hikes in 2017 feels ‘about right.’ This is quite the statement considering the pandemonium that ensued from a single rate hike in December; and this further highlights the feedback loop that appears to be playing out between global financial markets and the Federal Reserve. This is also considerable motive for investors to buy US Dollars as rate hike expectations out of the United States increase on the back of these more hawkish statements; and given the docile state of the global economy with so many Central Banks looking for a weaker currency, the simple fact that the Fed is simply ‘less dovish’ gives enough motivation to continue driving capital flows into the Greenback.

But this strength hasn’t necessarily been even-handed: While EUR/USD appears to be on the cusp of establishing a new down-trend as major, long-term support levels come into play the USD/JPY has merely ratcheted up to a ‘lower-high’ that makes the prospect of looking for USD weakness an attractive play even despite these more ebullient rate expectations out of the United States.

We look at two varying themes in the US Dollar below, along with how traders might be able to approach each moving forward.

The big level at the moment in EUR/USD is the price of 1.1212, which is the 61.8% Fibonacci retracement of the lifetime move in the pair (taking the low from the year 2000 to the high in 2008). This is a well-tested level that’s caught numerous support/resistance inflections since its formation, most recently serving as the April swing-low in the pair. Last week’s price action in EUR/USD spent quite a bit of time in this vicinity, seeing price drop to this level on Wednesday only for markets to fight with it for the remainder of the week.

However, given the quick break that we saw on Thursday to give us a slightly lower-low, we may have the initial signs of down-trend resumption beginning to show as support has begun to give way to falling prices. But given the continued posturing at this really key level around 1.1212, traders would rightfully want to approach with caution in the early portion of the week.

The previous swing-low in EUR/USD was at 1.1142, and this could serve as a type ‘activator’ level for short-side strategies. Traders can wait for this support to be broken to indicate likelihood of a continuation move after a lower-low comes into the market. After this level is violated, traders can then look for resistance in this old batch of support between 1.1172-1.1212 in the effort of using old support as new resistance. 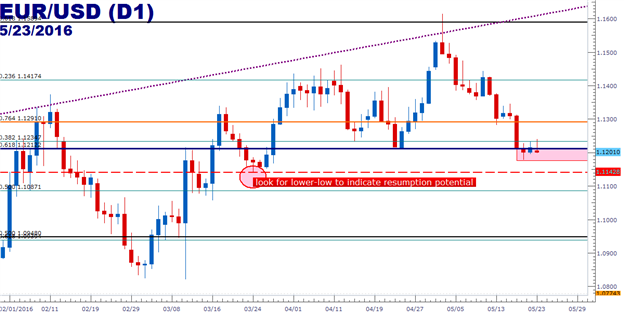 This is a trend that we’ve written about quite a bit in these market talks because, frankly, it was one of the more consistent moves that was seen throughout markets in the first quarter of this year. However, the past month has seen some retracement in the trend as traders have begun to factor-in a higher probability of action out of the Bank of Japan in the attempt to offset the rampant strength being seen in the currency. We warned of a pullback in the second week of April that saw over 400 pips retrace in the trend; only to be offset in two days of selling after the Bank of Japan made no changes to policy in April.

And for much of May we’ve seen the US Dollar continuing to run higher, bringing further relief and retracement to the down-trend in USD/JPY. We wrote two weeks ago that traders would likely want to wait for USD/JPY to begin putting in lower-lows before looking for resumption moves as this retracement had room to run.

Thus far on the early week we’ve seen the Yen strengthen by ~100 pips against the US Dollar, and this could give the appearance of a potential down-trend resumption move. But as we advised earlier in the month, traders would likely want to see a lower-low come in before looking for resumption lower in the pair. The big level at current is in the 1.0910 vicinity, as this is the 23.6% Fibonacci retracement of the prior major move, as well as being part of a zone of prior resistance. 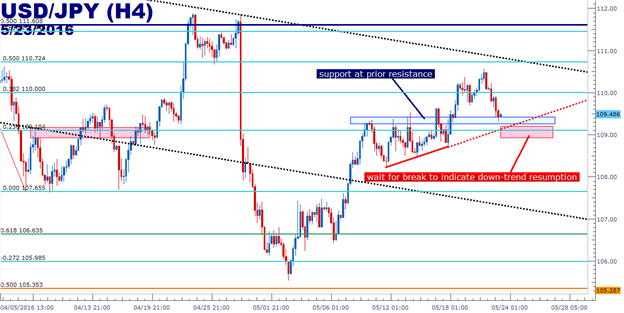