USD Strength Remains Predominant Theme as we Near G-7, BOC

- The US Dollar is holding resistance as we go into a weekend in which finance ministers from seven of the world’s largest economies will meet to discuss economic policies. This could produce erratic volatility on the Sunday open, so be extra careful of carrying risk into the weekend. If you’d like to address risk management, please don’t hesitate to check out our Traits of Successful Traders research.

- USD/CAD is furthering signs of a trend-change with bullish price action throughout the month of May. With a Bank of Canada rate decision set for Wednesday, we can see the possibility of a new uptrend in the pair confirm or die.

The US Dollar run of strength has continued, albeit to a lesser degree over the past couple of days as we’ve seen price action softening as we trade near resistance in the 11,960 area on the Dow Jones FXCM Dollar Index. The release of FOMC minutes on Wednesday has put the prospect of a rate hike in June firmly back on the table; whereas previously markets had drastically discounted the odds of a June hike. Just after April’s FOMC announcement, odds of a hike in June moved up to around ~26%. But after a disappointing Non-Farm Payroll report a week later, those odds dropped all the way down to ~5%; and this made logical sense, as traders were expecting the Fed to keep doing what they had been doing (supporting markets).

But the release of the meeting minutes from that April rate decision appeared to highlight that the Fed felt that markets were underpricing the probability of a June hike. Combine that with multiple Fed members talking up the prospect of 2 or 3 hikes for the remainder of the year, and we now have motive for USD strength as markets begin pricing-in the greater prospect of a rate hike in June, and perhaps even a more aggressive series of hikes throughout 2016. As of this morning, odds of a hike in June are now running at around 30%.

This puts the US Dollar in the spotlight as we near a rather pertinent macro event with the G-7 summit just a week away, set to take place in Japan; with finance ministers and economists meeting a week earlier to discuss global economic policies (this weekend). The kickoff meeting for this event started yesterday, and this meeting of finance ministers will see seven of the world’s largest economies along with European Union representation discuss what much of the financial world has been discussing for years, which is why global growth seems to be flagging despite the enormous troves of stimulus being driven into markets around-the-world.

So far, we’ve already heard participants agree that relying on short-term fiscal stimulus or monetary policies are sub-optimal mechanisms of kick-starting growth, instead advocating for structural reform to attempt to solve the global growth question. But, the various participants appear to have different ideas about how to approach the issue, and this is where the potential volatility may emanate from.

The US Dollar continues to trade at resistance that was initially encountered last Friday at the 11,960 vicinity. This is also the 61.8% retracement of the prior major move, taking the April 2015 high to the May 2015 low. This move produces a Fibonacci retracement that’s seen considerable price action since its formation; including the 27.2% extension of this move setting the ‘top’ on USD in January of this year. Traders can use this near-term resistance level at 11,960 to define their stance in the Greenback. Should resistance finally give way, traders can wait to buy ‘higher-low’ support at or around this prior resistance level. For those looking to take short stances, watch for this resistance level to hold and if it does, attempt to sell a ‘lower-high’ after support breaks at the 11,898 level. 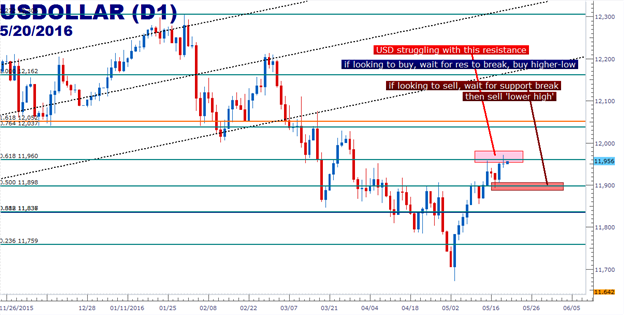 Bank of Canada Rate Decision is on Wednesday

One of the primary beneficiaries of this newfound USD-strength has been the Canadian Dollar, as the May run of strength in USD has finally broken the downtrend that was showing for the better part of three-and-a-half months since topping in the middle of January. Later in January, Christopher Vecchio and I wrote a piece on the prospect of the Bank of Canada taking a more passive approach to, instead, allow the newly installed government of Prime Minister Justin Trudeau to embark upon fiscal measures of growth, and it appears that the Bank of Canada is in a similar position as no change is expected to Canadian rates on Wednesday.

But more recently we’ve seen signs of a trend change on the USD/CAD chart as USD strength has come back as a predominant theme, and we look at that below as an aggressive trend-line was broken earlier in May, with price action now showing higher-highs and higher-lows. 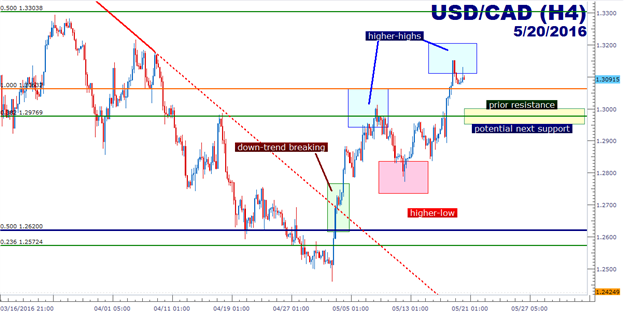