The US Dollar is Telling a Tale of Two Trends

- The US Dollar has continued its bullish move in the longer-term down-trend; and with FOMC meeting minutes set to be released at 2:00 PM ET today, either side could foreseeably play out. We investigate both sides of USD below with both a bullish and bearish thesis.

The US Dollar retracement continues, and at this point it looks as though the Greenback is attempting to carve out a fresh up-trend by finding near-term support at a higher-low that also happened to be a previous batch of resistance. But with FOMC meeting minutes set to be released today at 2:00 PM ET, either direction in the US Dollar could play as markets will get a little bit more clarity out of the Federal Reserve; and this near-term price action structure could assist in defining stance or trend moving forward.

The current support level of interest is the same that we had identified as showing resistance last week when we asked whether the US Dollar Had Already Set a Significant Bottom. This is a key price zone, as this is the 50% Fibonacci retracement of the prior major move, taking the high and low from April-May of 2015; but perhaps more importantly, price action has shown numerous instance of confirmation of this Fibonacci retracement since its formation, including the 27.2% extension of that move setting the top in the US Dollar. Also confirming this Fibonacci retracement is the higher-high that was set on Friday, as this came in right at the 61.8% retracement of the same move.

Given that we have a higher-high from the burst higher in USD on Friday, and with the early evidence of support showing at a higher-low, traders looking to sell USD should do so with caution with a heavy focus towards finding a currency exhibiting greater short-term strength than USD. One of the lone attractive candidates for such a theme may be the British Pound, and we take a more in-depth look at that a bit lower in the article when we discuss the bearish thesis in the US Dollar. 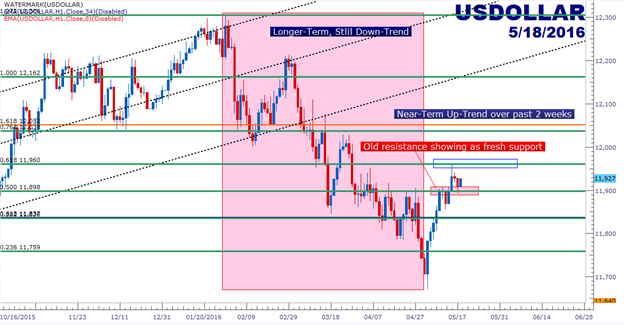 Bullish Thesis for the US Dollar

The bullish thesis for the US Dollar at the moment would likely be driven by the fact that, even if the Fed avoids hiking rates at their next couple of meetings, they’re still likely closer to a hike than pretty much every other major Central Bank. And with expectations for hikes in 2016 extremely low, it may not take much enthusiasm to bring on even more USD-strength.

Coming into 2016 the US Dollar was on a rampage. As the lone major Central Bank actually looking to raise rates, capital flows were gushing into the Greenback in the effort of getting long before higher rates came into the picture. But it was the very prospect of those higher rates that seemed to really disjoin markets, exacerbating risks out of Asia, and in Commodities while exposing an extremely fragile American recovery.

This was a confounding theme for a few reasons, but as we highlighted just before the New Year, the prospect of the Fed being the lone Central Bank to embark on a hiking cycle while the rest of the world looked for further easing with even more loose monetary policy made it even more unlikely that any true recovery would be able to set hold within the US economy. And in very short order, those risks appeared to come home to roost.

The theme of rampant USD strength began to capitulate as the Fed backed down from their idea of hiking a full four times in 2016. First, we heard Ms. Yellen take on a rather dovish tone on February 11th during her Congressional testimony. And then in March the Fed furthered this dovishness by reducing their median expectation for hikes in 2016 to two from four.

This is what helped to create that precipitous slide in the US Dollar. But more recently, Fed members have been talking up the prospect of more rate hikes (again); and the US Dollar has been catching a bid for two weeks on the prospect of a slightly more aggressive hiking cycle out of the US.

For those looking to buy USD, the more attractive markets to focus upon may be out of Oceania in AUD/USD and NZD/USD, as both have put in bearish structures as each respective Central Bank has taken on a stance of dovishness over the past couple of months. The surprise rate cut from the RBA two weeks ago played a contributing role to the turn-around in USD, and on the chart below we can see how this also kicked off a fresh down-trend in the pair. 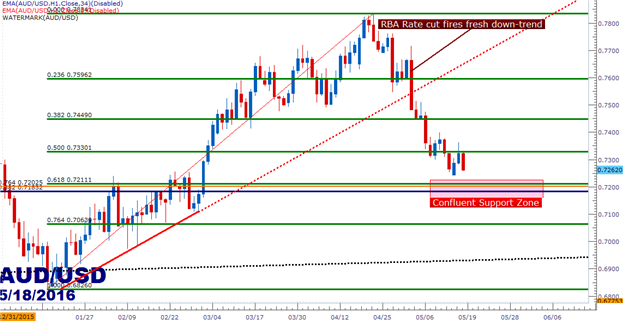 The Kiwi-Dollar is showing a similar tonality, albeit not as aggressively as what we’ve been seeing in the Aussie. The chart below highlights the recent support breakdown as price action has begun to move down to lower-lows and lower-highs. 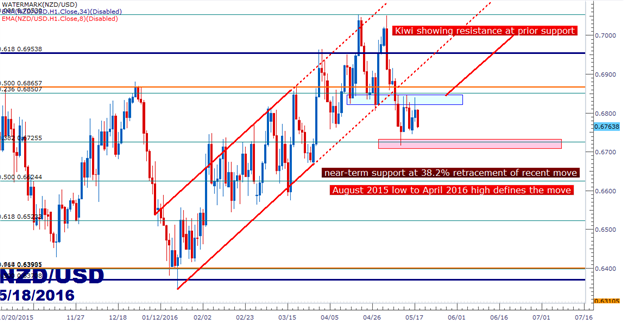 Bearish Thesis for the US Dollar

This theme would likely be driven by the same factors that have been driving USD weakness for the past three months, and that is the fact that the Fed is cautious towards hiking and creating a calamitous situation for the rest of the world, which could in-turn drive capital flows into the US Dollar; threatening or even nullifying any signs of gains or strength being seen in the American economy.

Perhaps one of the more disconcerting aspects of this theme as we turned into the New Year appeared to be the disconnect showing between markets and the Federal Reserve. The Fed was looking at a full four hikes in 2016 after it took much of 2015 to just get one. Just a few months earlier, the world braced for impact as Chinese markets crashed; and commodities had just continued to drive lower which didn’t improve any of the factors that the Fed was watching for those additional rate hikes.

The linchpin here appears to be that the Fed takes an uber-dovish stance as capital markets sell-off; as this is what had shown in Q4 of last year and again in the middle of Q1 this year. But capital markets are back towards prior highs, so the impetus to take on further dovishness may not be as great as it was just three months ago. This is, perhaps, one of the reasons we’ve seen so much hawkish commentary from Fed members of late, as the risks that showed up at the beginning of the year have begun to recede.

For those looking to sell USD, awaiting a break of the support level mentioned above at the price zone around 11,900 may be the advisable way to approach matters. And traders would likely want to take this to the next step by addressing pair selection… Given this recent bout of strength in USD, traders would likely want to marry this surging Dollar with a currency that could exhibit even more strength, and such a scenario may present itself in GBP/USD as we had noted last week after the pair had set a higher-low after last week’s Super Thursday announcements out of the Bank of England.

The Cable has just staged a quick short-term breakout, so for those looking to get long, waiting for price action to move nearer to higher-low support may be advisable. Of particular interest is the 1.4471 level for potential top-side re-entries. 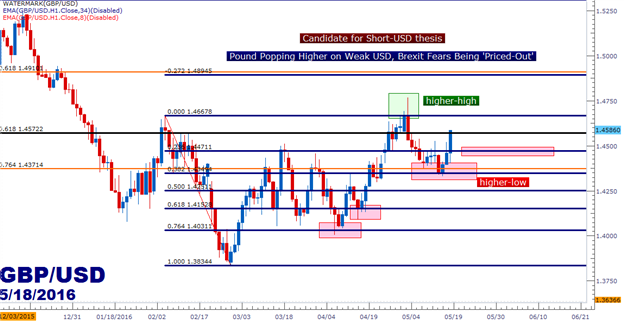