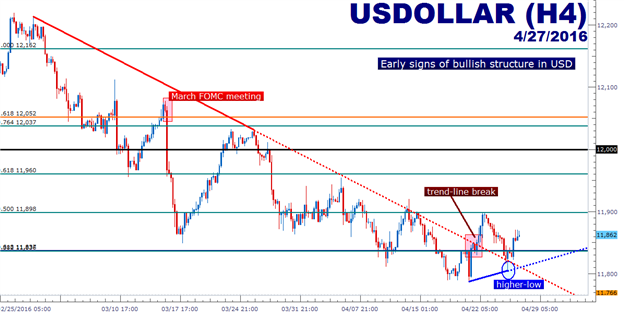 The FOMC Tightrope is Set to Continue

- The April FOMC Rate Decision is set to be released at 2pm EDT today, and while no change is expected, the details of the statement will likely be heavily watched.

- At issue is pace of rate hikes for the remainder of the year; if the FOMC statement alludes to balance in the American economy, this could be seen as a higher likelihood of a June hike, and this could bring strength into USD.

Today at 2PM brings yet another FOMC decision, although this month will not have press conference, nor will there be any Q&A; for that we will have to wait until June 15th. And there aren’t even really any decisions that are expected to be made– as pretty much every economist on Earth is expecting the Federal Reserve to stand pat at this April meeting.

But as has become usual, the details of the statement and perhaps more accurately, the fine tuning of said statement will likely be what markets are actually run on. And this run can happen in both directions, as recent FOMC meetings have shown us that even decisions in which no actual changes are expected, small adjustments to the Fed’s statements can really roil markets.

The big question is how close the Fed might be to hiking rates in June: Markets are currently pricing in a 22% chance of a hike in June, and 65% chance of a hike in December. The most recent dot plot matrix from the Fed (released last month) was looking at a median estimate of two full hikes this year; so we still have a case of divergence between market and Fed expectations.

The word to watch for here is ‘balance.’ As in, if the Fed believes that there is a balance of risks within the American economy that may allude to a greater degree of readiness to hike in June. This could bring on USD-strength as investors begin to increase rate expectations for the remainder of the year. If, however, the Fed gives a nod to global economic weakness, or commodity prices, this could largely be seen as dovish, which could bring on further USD weakness.

This divergence between market and Fed expectations was far more pronounced at the beginning of the year as risk aversion really began to set hold, with the Fed’s median expectation for a full four rate hikes; but the bank has backed away from those more ebullient forecasts over the past two meetings, and it was Chair Yellen’s testimony in front on Congress in mid-February that really began to bring strength back into stocks (and Oil). This is when Ms. Yellen had implied a rather supportive stance from the Federal Reserve, refusing to take negative interest rates off the table as a policy option in the event of further economic pain. This was largely inferred as the Fed taking a dovish approach towards future rate hikes, and since then stocks have recovered.

But all is not well across financial markets despite the recent re-resurgence in stock prices. While stocks have been going up, bonds have remained bullish (with yields moving lower). This is a bizarre type of situation because normally bonds will sell-off and yields will move higher in times of true economic expansion (as indicated by the 15.5% rip in the S&P 500 since that February low). In an actual environment of growth, in which inflation will likely denominate future interest rate hikes, investors are usually cautious of holding fixed-income investments that will become less valuable in a rising-rate environment.

We don’t have that right now. What we have are quite a few question marks as to what the Fed might do for the rest of the year and what repercussions might emanate from those actions. On one hand, they don’t want to trigger deeper global economic pressures by hiking rates further; but on the other, keeping rates at or near-zero for so long just continues to erode savings, putting pensions, retirees and even the US Social Security Program at risk. Further to this point, keeping rates ‘artificially low’ only introduces even deeper risks into the economy as banks are essentially being incentivized to take on more risk.

On the chart below, we’re looking at the 4-hour US Dollar since that March meeting; and we had discussed this setup two weeks ago. At the time, USD had just run down to a confluent support level (two different Fibonacci retracement levels within one point of each other). As we had mentioned, traders would likely want to wait for a bounce up to resistance before selling again, which is what happened last week. But after that resistance inflection, the US Dollar went on to break a down-ward sloping trend-line (below, in red), while also putting in a higher-low (below, in blue). This could be the early signs of a bullish structure developing in the US Dollar.

If Trading FOMC, You have to Manage Risk and Exposure Across the US Dollar

So, first off trading in such news environments is really, really dangerous. Nobody knows what is going to happen and even if they did, there is no way of predicting the way that the market is going to respond; especially around the Fed. So, you don’t have to trade it. Many professional traders avoid such environments because, frankly, they’re unpredictable and this heightened unpredictability makes it even more confounding to run a strategy.

But for those that do want to trade it, be sure to manage your exposure. As in, that setup in GBP/USD might look really attractive as the setup in AUD/USD and EUR/USD; but if you end up completely loaded up on one side of the Dollar going into a US announcement, well you aren’t really diversified. You’re just loaded up on USD in a few different ways. If you end up on the wrong side of the move, well then you end up being really wrong.

One strategy that could help such aims of diversified exposure is the US Dollar Hedge; and if you’d like to learn more, please click here to learn the entirety of the strategy.