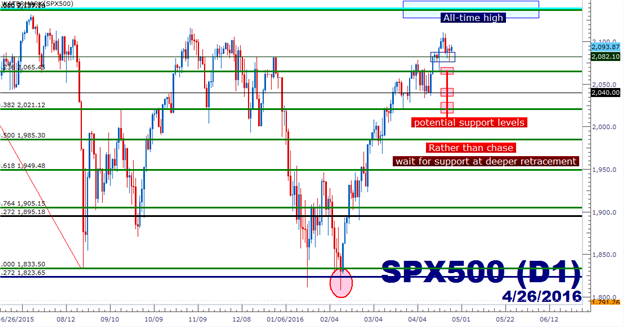 - A bevy of data awaits traders for the remainder of this week, and we previewed that yesterday. In today’s article, we look at technical formations in three key markets that traders may be able to utilize going into this batch of data.

- Heavy on the calendar are US Earnings reports, as well as a plethora of Macro data and three Major Central Bank meetings (FOMC on Wednesday, RBNZ on Wednesday, BoJ on Thursday morning, ET).

The remainder of this week is going to be fairly heavy on the data front. We previewed the highlights in yesterday’s Market Talk, and outside of some impressive continuation moves in GBP, much is the same as we had written yesterday. So rather than rehash what we’re still waiting for, today’s article is going to contain three charts of some of the more widely followed markets at the moment, along with how traders might be able to strategize around this schedule of upcoming economic reports using recent price action.

This is probably one of the more relevant markets at the moment as US earnings will be a big part of this week’s data trove. We had discussed this setup in yesterday’s SPX technical piece. And on the chart, there isn’t really much question as to the near-term trend, which is and has been aggressively strong since the February 11th low. Of course, this low came into play right around the time Chair Yellen was testifying in front on Congress for her twice-annual updates; and around this time an ‘about-face’ hit markets in which the vicious down-trends turned around and became screaming up-trends; and this is relevant to both Oil and Stocks.

The big question is whether this Wednesday’s FOMC meeting might promote an extension of this move by the Fed continuing with a dovish stance towards future rate hikes. This was somewhat of the takeaway at that testimony on February 11th. Ms. Yellen didn’t talk up rate cuts or hikes or anything along those lines; she merely noted that the Fed wasn’t going to take any option off of the table, including negative rates, and this was widely read as the bank pledging support to risk trends.

And with so many companies reporting earnings on top of Wednesday’s FOMC meeting, traders would likely want to approach this market with caution. The most recent technical inflection showed what could be higher-low support off of a previously resistant level (shown with the blue box on the below chart), but this may not be a very attractive entry given potential upside. Instead, traders may be better served by waiting for a deeper retracement to a lower support value. Of particular note on the S&P 500 would be the Fibonacci retracement from last years ‘Chinese Black Monday Move,’ which has continued to provide usable levels since its formation.

The logic of such a strategy would be to, essentially, use the news. If we can get a quick near-term dip down to a deeper support level, and if support can begin to show, traders can look at jumping in the up-trend at a cheaper price with the legitimate prospect of continuation (given support). This could enable a relatively tight stop with an attractive profit target.

This is another market that saw a huge burst of activity around that February 11th testimony, as Gold spiked up to a new annual high while Ms. Yellen was speaking in front of Congress. The logic being, with more down-trodden expectations for US inflation and with less impetus to actually kick rates higher out of the US, which was pretty much the only economy looking to raise rates, the relative value of Gold moved higher.

And given the high likelihood of hearing the Fed speak on these themes this week, along with overall risk hues being deduced from corporate earnings, this is a market that remains primed for movement.

With situations such as we have with Gold’s current setup, traders can try to do both by assigning a prior-trend-side bias to the range. As in, when prices move down to support, look to buy. But when prices move to resistance, only close the long (or a portion of the long if scaling out, looking for a breakout on the remainder of the position). 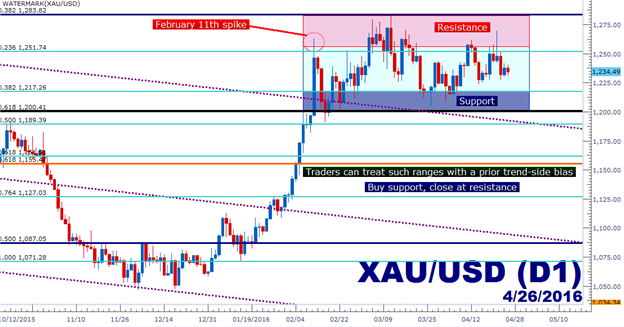 The strategy here is going to be a lot shorter as this is more of a technical play, but we have seen some interesting levels come in over the past week after the outsized reversal after the Doha-talks failed. There are two Fibonacci retracements of interest here, with the long-term formation taking the low from the year 1998 of $10.35 to the 2008 high of $147.27. The 76.4% retracement of this move comes in right at $42.66 (shown in black below). The shorter-term Fib (shown in blue below), takes the 2015 high to the 2016 low, and the 50% retracement of that move is at $44.295, which is showing as current resistance.

So, this is similar to the Gold setup above, but price in Oil has already tested support and may be nearer to a top-side entry. Traders can, again, look to trade the short-term range with a prior trend-side bias, by buying at or near support and looking to close or begin scale out around resistance. 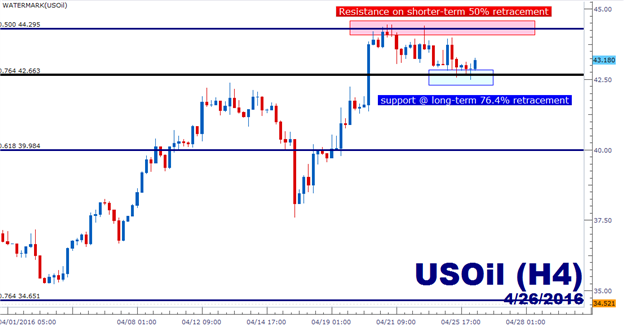