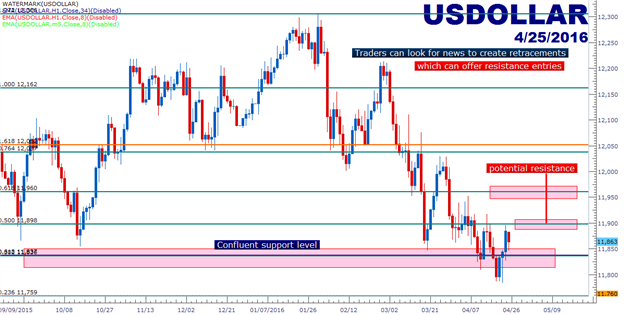 Greenback, Yen Primed for Volatility Ahead of Heavy Week of Data

- This is a heavy news week. Make sure risk management has been addressed before taking on significant risk, because these types of weeks can be really costly if risk is left unchecked.

- The highlights on the data front are a plethora of US quarterly earnings reports out of Tech companies, along with three major Central Bank meetings and a large batch of US data.

This week presents a significant amount of potentially market-moving data points, and this is certainly the environment where the trader wants to proceed with caution. If you’re trading this week but aren’t comfortable with your risk management, I highly recommend that you address that first because the range of possible outcomes increases dramatically with such a large number of potentially market-moving reports.

The first strain of news that traders will need to contend with will come from quarterly earnings reports from approximately 1/3rd of the S&P 500. The headliners for this week’s earnings reports are tech companies, as the recent trend in tech earnings hasn’t been very encouraging, and tech is often looked at as a precursor of economic health. If companies forecast trouble ahead, they usually invest less in new technology in order to conserve/hoard cash, so this is usually one of the first places that a bigger-picture slowdown might be seen.

We had discussed the prospect of looking for leading indicators within sector/industry performance back in October in the article, Follow the Leader: Apple, Oil to Cue Global Markets. As we had discussed in the article, Oil could be looked at as a type of leading indicator for US earnings and hence, equity performance; and similarly iPhone sales in China could be looked at as a precursor of Chinese economic health. Apple has already tried to brace markets for bad news by warning that iPhone sales would underwhelm, and the big question will likely be how weak those sales were in China over the past quarter as the economic decline in the country deepened.

Apple reports earnings on Tuesday after the bell, and we’ll also get quarterly earnings reports from Twitter, Facebook and Amazon this week. But these aren’t the only pieces of data that markets will get this week…

We also hear from three major Central Banks, while also receiving a plethora of economic reports. Heavy emphasis will be on US data, as we get Durable Goods (8:30 AM ET) and US Consumer Confidence (10:00 AM ET) on Tuesday morning, followed the April Federal Reserve meeting on Wednesday, and Q1 GDP on Thursday, where the expectation is for a meager .6% growth for the first quarter of the year.

Strong beats on any of these data points, or should the Fed take a surprisingly hawkish stance, warning of potential rate hikes in June, the US Dollar could certainly break its recent down-trend. But given recent price action, traders would likely want to remain cautious of chasing top-side moves and, instead, look for opportunities to sell resistance. The chart below goes over recent levels of interest after we bounced off of the confluent support zone at 11,836-11,837:

Also of note for this week is the Bank of Japan meeting, set to finish the morning after FOMC. This one is interesting as its appearing increasingly likely that the Bank of Japan may be nearing the limits of monetary stimulus, as the Bank already owns a large chunk of the Japanese Government Bond market (at least 33%), while also being top-10 shareholders in many Japanese companies as QE was expanded to begin buying stocks when the bank ran out of bonds to buy.

The Japanese Yen has seen rampant strength over the past three months as this reality of the limits of balance sheet expansion have become all the more real. This is likely why the bank tried to make the surprising move to negative rates at their January meeting, which has pretty much turned out to be a nightmare for the BoJ, as the Yen weakness it was meant to inspire only lasted a day before heavier risk aversion drove the Yen higher and dragged the Nikkei lower.

On Friday, a report began circulating that the Bank of Japan may be investigating a negative rate loan scheme similar to what the European Central Bank offered. This is, in essence, direct stimulus to banks, as the Central Bank would offer the borrowing bank a loan with a negative rate, which could then be loaned out to general customers and independent borrowers. This would allow the bank to make money on both sides of the loan, with the negative rate amortizing the outstanding balance (reducing by the negative interest rate), while also allowing the bank to pocket the interest paid by the ultimate borrower.

This report helped to put in a significant move of weakness in the Yen, with the Yen dropping by as much as -2.32% against the greenback on Friday.

Will the BoJ deliver? Nobody really knows; we’re watching Neo-Keynesian history being made here, and this week will provide the next decision point to the trend in the Yen. At times like these, traders can often be best served by referring to the chart for answers, as price and price alone will tell the true tale of the market.

We had discussed setups in USD/JPY for this week in Friday’s Market Talk, and those technical formations still apply. The updated, shorter-term chart is below: 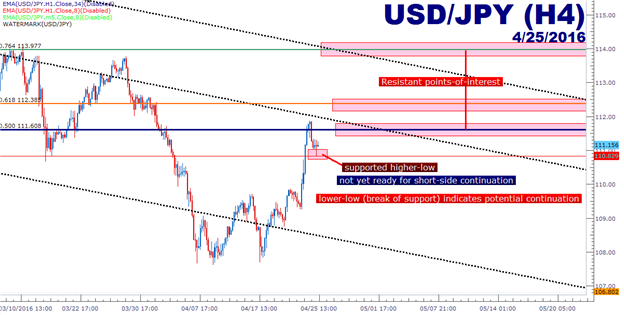