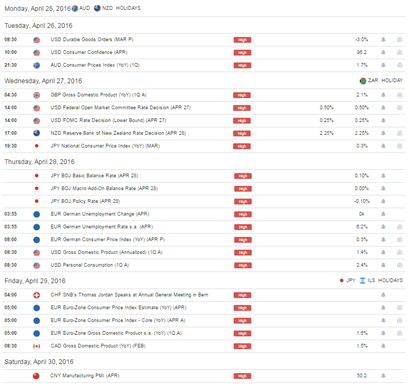 - Next week is rife with high-impact news releases. Two of the bigger ones will be Central Bank meetings out of the US and Japan, and we go over each of those below.

- Next week is the type of environment that strong reversals can take place, so it’s as important as ever to address risk management ahead of the volatility.

Markets thus far in 2016 have been rather chaotic. After starting on an extremely negative note, support came into many risk trends in mid-February, and since then price action has been fairly bullish across stocks, commodities and risk currencies. Meanwhile, selected risk-aversion trends have continued to remain well-bid, like in Treasuries or the Japanese Yen (and Japanese government bonds), and this indicates that all is not well.

The big question, of course, and the matter that seems to be open to wide debate, is which direction is ‘right?’ Are the low yielding treasuries and extremely strong Yen highlighting the potential for even more risk aversion; or are these trends merely the laggards after stocks and commodities have begun their most recent resurgence?

Next week can be helpful towards answering those questions, as we get rate decisions from three different major central banks while receiving commentary from another. And even outside of these Central Bank meetings, next week’s calendar remains active throughout the trading week. Below are the events that we have on the calendar that are considered ‘high importance.’ And just below that; we outline three markets of interest in anticipation of next week’s news. If you’d like to see the full calendar, please click on this link, or you can click on the image below for a more full-size picture.

The Bank of Japan meeting is probably the most interesting event on the calendar for next week, at least from where we stand today. The BoJ’s meeting in January has somewhat of set the stage for the current situation that we currently have in Japan, which is very much the forefront of the global QE debate.

The Bank of Japan began their QE program quite a bit later than the United States, beginning in 2012 with the election of Shinzo Abe on the back of the ‘three arrows’ approach attributed to Abe-nomics. And shortly after this began, hope enveloped Japan as the Yen weakened, the Nikkei rose, and exporters finally began to feel a bit of respite after years of Yen strength had eroded profit margins. And this feel-good momentum lasted for a few years as the Yen continue weakening and the Nikkei continued rising.

There’s only one problem: The Bank of Japan began to run out of bonds to buy as they’d already bought up a considerable chunk of the Japanese Government Bond market with these QE proceeds. So in Halloween of 2014, the Bank announced that they’d start buying stocks with QE. Within a year, we heard why this probably wasn’t such a great idea when the Japanese Government Pension and Investment Fund reported a $64 Billion drawdown on that portfolio (approximately -5.6%, on a pension fund), after the volatility in August and September.

So, more QE seemed like a distant prospect. And in January, the Bank shocked the world with a surprise move to negative rates with the design to spur capital flows, with the hope being that Yen weakness would materialize on the back of negative rates driving capital out of and away from the Japanese economy.

Going into this upcoming BoJ meeting on Wednesday and Thursday, traders have begun to sell Yen on renewed rumors of even deeper negative rates. This has provided some much needed relief in the down-trend on USD/JPY, and this could open the door for reversal setups in the early portion of next week. There are three potential points of resistance that traders can watch for (outlined on the chart below). Traders would want to wait for resistance to actually develop at this level before looking for a trend-side continuation entry: 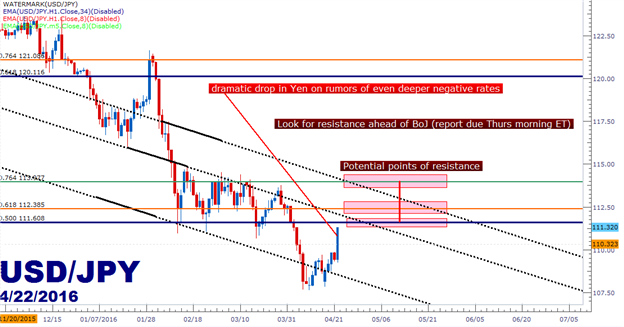 The US Dollar will likely remain volatile as a huge cloud of confusion still surrounds the Federal Reserve. The US Dollar has been crushed over the past couple of months as rate hikes out of the Fed have looked to be a more and more distant prospect. And there is very little chance for an actual move at this April meeting on Tuesday and Wednesday of next week, but as has become normal with these FOMC decisions, the devil will likely be in the details.

Will the Fed give a hat tip to inflationary forces, thereby indicating a more hawkish stance moving forward? Or will the Fed remark on global economic pressures, giving the opposite implication towards even more dovishness. The Dollar is likely going to move on clues an innuendo here, and that can always be a dangerous thing.

One pair that appears primed whether FOMC takes a more dovish or more hawkish tint is the EUR/USD; which has curiously been rather range-bound over the past month. The past months’ worth of price action has given quite a few levels to work with, and the key level of note at the moment is 1.1212, which is the 61.8% retracement of the ‘lifetime move’ in EUR/USD (shown below), and has provided resistance on the monthly chart for over a year now. 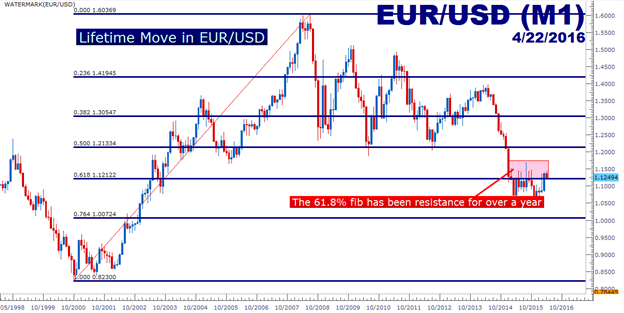 Over the past month, we finally saw price action climb above this level. This old level of resistance may finally become new support, especially in the scenario in which the Fed takes on an even more dovish tone. So, with current price action, traders can look to buy support at this level should it come into play.

But should price action break below support (stopping out the long position), traders can then change stance and begin to look for short positions, with the same level at 1.1212 then being used as resistance. We go deeper into the setup on the chart below, looking to take a conditional setup when a really strong and well-confirmed support/resistance level is available to the trader. 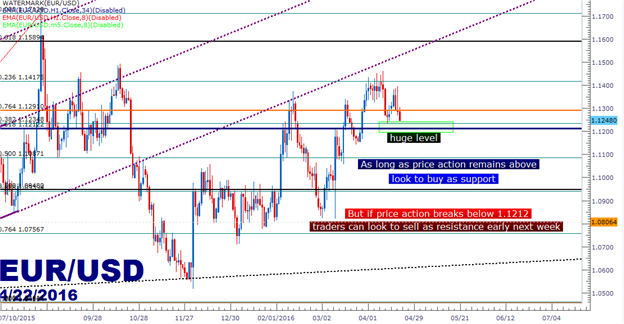