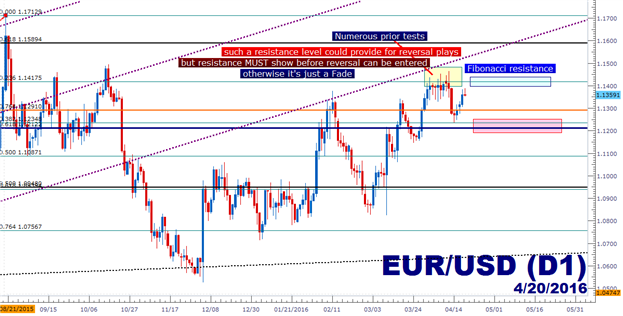 EUR/USD, EUR/JPY Strategy Ahead of the ECB

- Tomorrow brings us yet another ECB meeting, although this time expectations for new announcements are extremely low. More interesting will be the verbiage during tomorrow’s press conference.

- Despite the fact that no announcements are expected, Mr. Draghi’s take on the European economy could certain provoke moves in either direction. Given the recent range-like qualities in EUR/USD, there are levels on both sides for traders to work with.

ECB is Tomorrow: Expectations are really low for any type of any announcement after the artillery of stimulus that was unleashed at the last meeting. Logically, the bank would likely want to wait to gauge transmission impacts of these most recently triggered policies before making any additional moves, so it’s not likely that we’re going to hear very much in the realms of new information tomorrow from the European Central Bank.

As Chris Vecchio covered this morning, the most likely source of potential volatility at tomorrow’s meeting is during the press conference with Mr. Mario Draghi when the head of the ECB gets to go ‘off book,’ during the press conference. Over the past few ECB meetings, this commentary has provided considerable motivation for volatility; especially given the context with which it was delivered (new policies being rolled out). And given the pervasiveness of current economic themes that are more global in nature, particularly vulnerability around commodity prices and the continued slowdown in China, Mr. Draghi’s comments could certainly carry weight for risk trends.

Below, we go over current price action setups in EUR/USD and EUR/JPY ahead of tomorrow’s ECB meeting.

We discussed the approach towards this pair last week in the article, EUR/USD, USD/JPY Game Plan for the Weeks Ahead, and that strategy pretty much is the same. Support and resistance levels have remained ‘in play’ since that writing, and traders can continue to refer to the Fibonacci structure that we had looked at previously.

In last week’s article, price action was trading near support in the vicinity of 1.1212-1.1291 (both of which are Fibonacci levels). Since then, prices have begun to angle higher towards near-term resistance in the pair, at a level that’s seen significant price action over the past two weeks at 1.1417. But given the recent confirmation of ‘higher-low’ support, traders should move towards short positions with caution, even if resistance does begin to show.

An area of this nature could be interesting for reversal plays given the veracity of recent tests at this level. Traders can keep this area marked on the chart, and watch how prices interact if they move up there during the announcement. Should resistance begin to show (prices moving lower off of this resistance), traders can look at the short-side reversal, with targets set towards prior support levels. Stop management is extremely important on such approaches, as reversals are, by nature, going against the grain.

On the flip side, should tomorrow’s announcement bring prices lower, traders may be able to catch an entry at support in the direction of the most recent move (higher). The area of support that could be used here would be the batch between 1.1212-1.1291. And again, given that we’re looking at entries around a news announcement, it’s important to wait for support to actually show before triggering.

One pair that is already at resistance is EUR/JPY, and this could be a tricky one given the past two days of bullishness in the pair, as Yen strength has begun to recede a bit. We had written about this setup two days ago, and again that approach remains unfettered. We had cautioned against pressing short positions as prices had just burst higher after a large gap to open the week. We had also pointed out deeper potential resistance levels based on a Fibonacci retracement of the prior major move (shown in purple below).

The level of interest is at 124.40, which is the 38.2% retracement of the prior major move. This level had capped EUR/JPY’s advance yesterday, and has remained untested so far today. Should this level stick as resistance, as in; if prices are unable to break above, the trader can look at triggering a short-side trend-continuation entry in the direction of the prior move (lower). Today’s price action around 124.40 will be critical to such an approach. If prices continue to respect this level, traders can look at lodging stops above the 125 psychological level as well as the 50% Fibonacci retracement at 125.13. 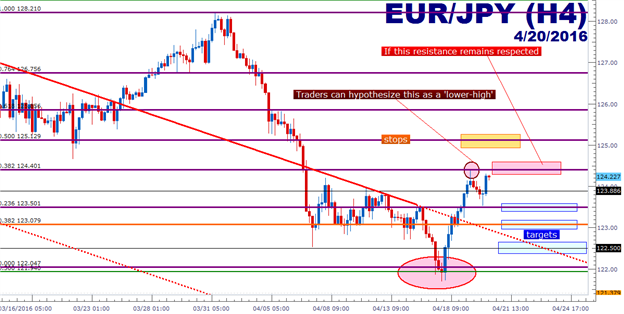