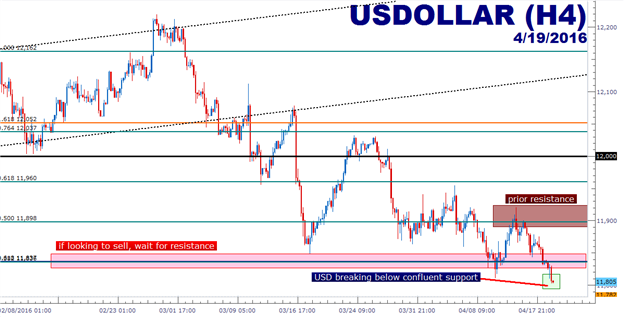 How to Approach Stocks and Gold with USD at Fresh Lows

- The US Dollar has continued its down-trend by breaking to fresh lows today, and this has created sharp movements in key markets like major FX pairings, stocks and metals. Below, we go over how traders can approach setups in SPX500 and Gold.

- Even though many of these uptrends look to be beyond reproach, chasing surging prices often brings on adverse results. To address risk management, please check out our Traits of Successful Traders research.

Last week we wrote looked at the continued down-trend in the US Dollar. At the time, USD had just run into a confluent support level at 11,836-11,837, and as we had written this looked to be more of a bounce in the down trend rather than a legitimate reversal. In the latter portion of last week, USD put in a meager rally to find resistance off of the same Fibonacci retracement that had previously provided support (shown in green below), and now price action is pursing down to new lows.

Something of this nature has a tendency to produce reverberations throughout the financial world as this can add a serious motivator to many major pairings, as well as many metals and commodities. And if the trader isn’t careful, this can quickly lead to over-exposure in key markets, like USD. For instance, with this morning’s USD weakness, if the trader then looks to sell USD across the spectrum, they’ll end up with a poorly constructed set of trades (or we could technically call this a ‘portfolio’), and the trader is basically just trading on one theme (USD weakness).

Below, we go over a series of setups that traders can look to in order to take advantage of the USD-weakness theme.

The S&P is probably one of the stronger rallies around markets at the present, and the logical tie with the USD dollar is that USD could continue weakening on the back of lower rate expectations out of the US (which are being driven, at least in part by global economic pressure); and this theme carries over to stocks given the expectation for the more accommodating economic environment provided by the Fed.

But just because we’re at new highs doesn’t mean that one should just rush out to buy at any price. Prudence is still well-advised here, and traders can look to employ trend-following approaches in the S&P 500. We had looked at such an entry early last week off of 2,040 and then again later in the week off of 2,065.

Basically, the trader wants to be vigilant for a reversal here: Identifying and buying at support so that relatively cheap stops can be used can be a critical part of a trend-continuation strategy. If the uptrend continues, that could bring 3 or 4 times the trader’s risk amount; but the trader also has to go into the trade knowing that they may have to enter 2 or 3 times to actually catch the trend-continuation move. If you’re not familiar with risk management in such a structure, please feel free to go through our Traits of Successful Traders research, where we outline the differentials in risk-reward.

Traders can try to avoid chasing prices by instead waiting for support. Given the recently-set new high, traders can look to buy the next higher-low in the efforts of trend continuation. This higher low may come in at a level or area of previous resistance, such as the 2,080 vicinity (identified by the dashed blue line below). If we do get further softness in prices, traders can look to buy a lower level of support at 2,065 or 2,040; and if we break below 2,000 then the theme of SPX strength that we’re looking at comes in question. 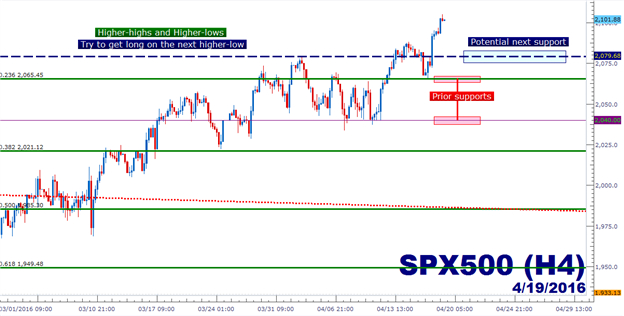 A weak USD has a tendency to really provoke metals prices, and we’ve seen that playing out in Gold on the morning (although to a far greater degree in silver). And after the meteoric rise in Gold prices in the latter portion of January and the early portion of February, price action has been rather congested, making long trend-side entries more challenging.

So, in essence, we have a type of a volatile range printing near new short-term highs; and the trader can adapt to this by utilizing range-bound logic with a prior trend side bias: As in, the range can still be traded like a regular range, but when price moves up to resistance, the trader looks to only close long positions (or scale out at incrementally higher levels), but does not take the short entry given the prior trending-bias.

We utilized such an approach a couple of weeks ago in another top-side re-entry, and since then we’ve seen an upward-sloping trend-channel develop on the 4-hour chart. With this morning’s strength, Gold has just moved to the mid-line of that channel, as well as the $1,251.74 resistance, which is the 23.6% Fibonacci retracement of the prior major move. 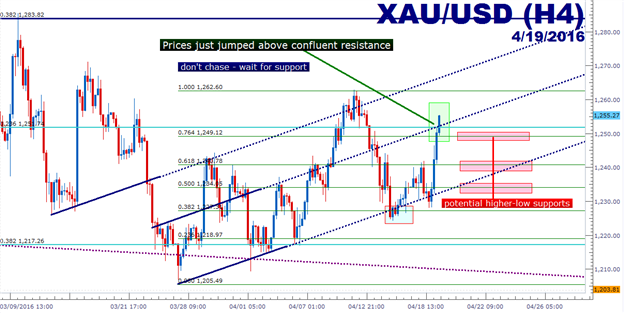