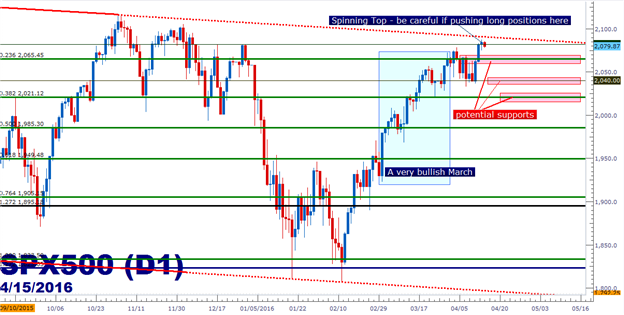 - Both the SPX and DAX are trading at interesting levels that traders can use to game plan for the next couple of weeks. We go over both below after a brief synopsis of the fundamental environment to provide context. If you want to see similar such plans for EUR/USD and USD/JPY, please click here.

The big data overnight was the release of Chinese GDP, which, as usual came in-line with expectations. The expectation for this print was 6.7% and that’s precisely what China reported. One of the more interesting parts of the release relates the recent expansion of credit throughout China, and that was the fact that home prices have increased by 71% in March from a year earlier. That is 71%, in one year. This massive increase in real estate prices is, of course, driven by debt; and this debt has become a core part of the strategy that China is using to offset the larger slowdown taking place in the Chinese economy (much of which is resultant from too much debt to begin with).

But perhaps more interesting on the fundamental front are Central Bank meetings set for the end of the month, as well as earnings season heating up next week in the United States. The goal posts for US earnings estimates this quarter have been driven dramatically lower, with expectations for a -9.8% drop to Q1 earnings from a year earlier. So the good news is that the bar for Q1 earnings is very low. But that can also be somewhat of the bad news if we see companies still failing to meet these lowered expectations. Thus far, we haven’t seen that but we’ve mostly heard from banks in this first week of earnings releases. Next week is when many consumer names begin to report, and this is when we might be able to get a better idea of corporate activity in the first quarter of the year.

And most global indices appear to be awaiting the next leg of news or tradeable information. We have some element of resistance on the three major indexes out of the United States, Japan and Germany. Below, we go over each with what traders might look for in order to begin lining-up setups in each of these markets.

US markets are putting in some of the more bullish price action formations amongst equity indices at the moment. While the Nikkei and Dax had struggled through March and are still subdued below the March highs, the S&P 500 rallied through most of month and still remains above those levels.

With that being said, traders may want to be cautious if looking to buy the S&P at current levels. Yesterday’s price action produced a spinning-top formation, which can often be indicative of a swing in the other direction, particularly when paired up with near-by resistance. Rather than chase price action at the top of a move, wait for prices to move nearer to support so that, at the very least, a reasonable stop can be set on the position. We had walked through one such approach on the S&P earlier in the week, and we had updated that yesterday with an eye on 2,065.45 for re-entries.

The level of 2,065 is pertinent as this is the 23.6% retracement of the prior major move, taking the May 2015 high to the August 2015 low. But perhaps more importantly, this Fibonacci retracement has seen significant price action since its formation, so this is a type of validation or confirmation that traders can use in their strategy moving forward.

Should price action find support around the 2,065 level, this can open the door for long-setups. A little deeper, we may have support come in around 2,040 or 2,021.12. Each of these levels can be used with this type of approach if looking to buy the S&P. We discuss using price action to trigger entries in the article, The Price Action Trigger.

The big level of interest on the DAX at the moment is 10,000. This is a major psychological level that’s exhibited considerable support and resistance since first being touched in June of 2014. This is also the 127.2% extension of the German expansion move after the wall fell in Berlin, taking the low from the year 1990 to the high set just before the tech collapse in the year 2000.

The extensions of this move have held up really well, as the 161.8% extension marked the top of the move in the DAX. We look at the big picture setup around this Fibonacci setup below. 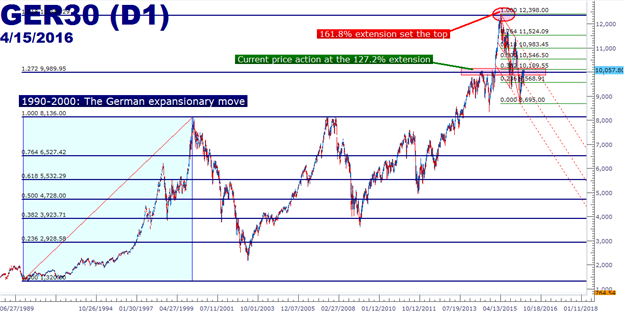 And in the chart below, we zoom in to look at potential game plans around this critical level around 10,000 on the DAX. 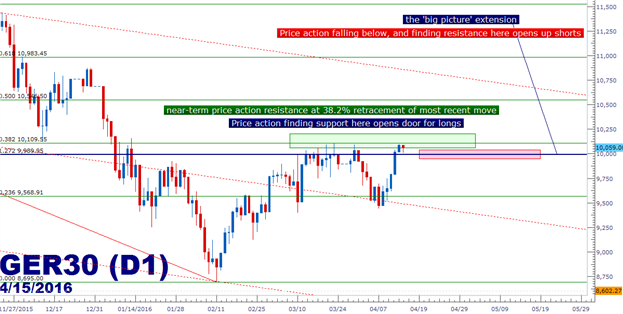