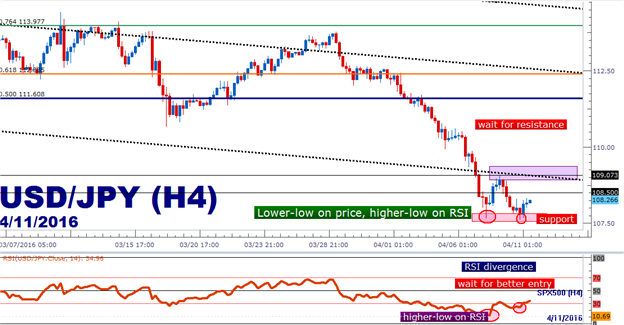 - A heavy week of news awaits markets as US earnings season kicks off after the bell today: The good news is that expectations are really low, looking for a -9.8% drop to Q1 earnings year-over-year.

- One of the continued clean trends in markets has been in the Yen, but USD/JPY is showing a case of divergence, indicating the extremely oversold setup in Yen at the moment.

The Yen Just Keeps Going: While the recent bout of USD-weakness has brought on quite a bit of coagulation across the currency space, one area where clean trends have continued has been in the Japanese Yen, as the rampant strength in the currency has continued with little signs of reversal. This has been a theme that we’ve been discussing for nearly 7 months now, as the Bank of Japan has been rocked by a combination of volatile markets and dovish Central Bank movements out of the United States and Europe. And after more than 3 years of Abenomics has been unable to turn the tide of deflationary flows, it’s looking more and more likely as if the Bank of Japan is nearing the end of their ammunition.

The bank was running out of bonds to buy as far back as 2014, in which the surprise Halloween announcement that the BoJ would direct asset purchases towards stock-based ETF’s caught traders off-guard. But not more than one year later we heard the realization of why this wasn’t such a great idea when the Japanese Government Pension and Investment Fund (GPIF) reported a $6.4 Billion drawdown after the equity market volatility of August and September. This was a 5.5% drawdown – on a pension fund – from two months of volatility.

So, the idea of more QE became less and less attractive as a) there weren’t many Japanese government bonds left to buy and b) buying stocks with QE (while sitting near multi-year highs) had proven to be a really risky way to add liquidity into markets. This is likely one of the reasons that the Bank made the surprise movement to negative rates at the end of January; with China looking to be in a precarious position and with the Bank seemingly running out of room to do more QE, the BoJ was likely hoping to spur capital flight by imposing negative rates.

But this has been disastrous as pretty much the exact opposite has happened. The big question now is where the Bank of Japan might go from here, and nobody really knows. But it’s looking increasingly likely as if they’ve run out of ammunition to do more QE. The next BoJ meeting is April 27th-28th, and this is when we’ll get that next batch of data points from the Japanese Central Bank.

For now, USD/JPY is bouncing off of support set last week, but the pair is still looking quite oversold. On the below chart, I’ve added the RSI indicator to highlight a recent case of divergence, when price set a lower-low but RSI did not. This, at the very least, should urge caution to those looking to trigger fresh short positions. Be careful of pushing the Yen trade right now, especially on a Monday ahead of a heavy week of data; and instead look for resistance to show before looking to trigger the position.

US Earnings Season Kicks Off Today: Alcoa reports earnings after the bell today, and that means that we’ll usher in another round of quarterly earnings numbers. Alcoa (ticker: AA) traditionally is the first company to report quarterly earnings numbers, and we’ll get more big names with a specific focus on banks throughout the week. JP Morgan (ticker: JPM) reports on Wednesday, with Bank of America (ticker: BAC) and Wells Fargo (ticker: WFC) and Citigroup (ticker: C) reporting on Friday. Next week is when the earnings announcements will really begin to pour-in from the big cap names out of the US.

The good news is that expectations for this round of earnings are relatively low, having been downgraded numerous times on the back of falling commodity prices. The mean expectation for S&P earnings is for a -9.8% decline to first quarter earnings year over year. This would be the most aggressive drop in earnings since Q3 of 2009, just after the Financial Collapse.

But it’s important to keep in mind the role of expectations, particularly with announcements such as earnings. The possibility exists that we see a drop to earnings but still see strength in stock prices, especially if earnings come in lower (compared to last year), but better than the decline currently being expected. And given the strong moves that we saw in Oil prices for over half of last quarter, this is not out of the realms of possibility as the goalposts have been moved so incredibly low (looking for an earnings contraction of nearly -10%). 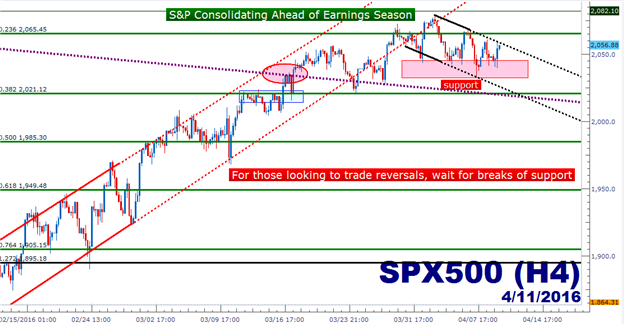