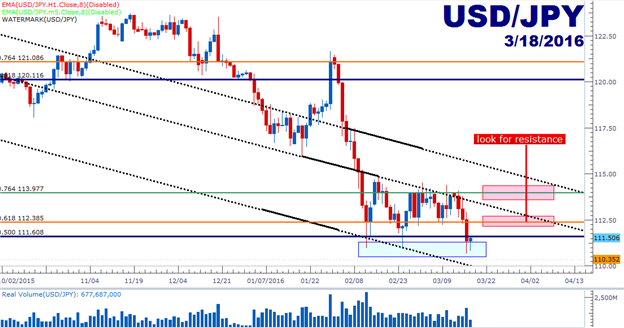 - Next week’s data calendar is relatively light, and after a big week of moves, this can be a key opportunity to play pullbacks in new themes that may turn into extensions or substantiation of trends.

- We look deeper into both USD/JPY and EUR/USD below, and traders can potentially look to play pullbacks in both of these markets next week.

- If you’re looking to improve your trading approach, check out our Traits of Successful Traders research. And if you’re looking for trading ideas, our Trading Guides can provide a plethora of longer-term ideas while our SSI Indicator can help with shorter-term and swing-trading ideas.

This week brought a huge change-of-pace to markets. At Wednesday’s FOMC decision, the Fed backed down. They didn’t cut rates nor did they avoid an expected rate hike (because few were actually expecting one), but they did lower forward guidance from an expectation of four rate hikes down to two for the rest of 2016.

And more than just the Fed backing down from four hikes in 2016, perhaps more importantly, they’ve reiterated a theme that’s been pervasive for the past eight years of the Post-Financial Collapse World; and that is that Central Banks are going to continue supporting markets.

It looked like the Fed was going to pull the monetary punch bowl in December when they finally hiked rates while telling markets that they were looking for a full four rate hikes in 2016 (via the dot plot matrix). As we had written to cap off 2015, four rate hikes in 2016 would likely be too much pressure for markets to bear when considering the concurrent risk factors of continued carnage in commodities while Asia and Europe are facing economic headwinds. It didn’t take long for these risks to come home to roost as markets began selling off with the open of the New Year.

The biggest takeaway from this week’s FOMC announcement has been US Dollar weakness with this theme permeating through various currencies and commodities. Next week is light on the data calendar, and that can be an ideal time to position-in to new setups. Below we look at some key markets of interest around this theme for next week.

Perhaps one of the most pertinent repercussions of this recent bout of USD-weakness has been a reemergence of Yen strength. We had written on this theme back in September when we called the Yen the Safe-Haven Vehicle of Choice, and this was essentially based upon the positioning of the Bank of Japan relative to other Central Banks around-the-world. Frankly, the BoJ was one of the most vulnerable with less flexibility than their counterparts in Europe, the US or China. As each of these economies had room to do more ‘loose’ monetary policy while Japan was already feeling the strains of 3+ years of QE being unable to turn the deflationary tides; this exposed the Yen for capital flows.

The Yen has strengthened despite the multiple efforts of the Bank of Japan to quell that strength, including the surprise decision to move to negative rates. This seemed to really backfire on the bank as it’s just created even more Yen strength along with significant weakness to the Nikkei.

USD/JPY just ran down to a significant support level. The price of 111.60 is the 50% Fibonacci retracement of the 1998 high to the 2011 low. Perhaps more importantly price action has been stubborn at this zone, giving three tests over the past six weeks. The Dollar weakness on the back of FOMC finally gave the pair the ammunition to fall below, but price action has remained tepid since. This setup could be attractive should price action bring resistance in the 112.38 or 114 level next week. These are both fib levels that have shown previous examples of support/resistance.

Moving forward, the Yen could continue to shine as a safe-haven candidate. We’ll likely hear more from the Bank of Japan, and this will likely be around the ability of the bank to move rates to even deeper negative territory. There have already been whispers around this theme and Japanese Government Bonds are already moving deeper into negative territory, so this appears to be a likely prospect. The bigger question is whether this will actually elicit Yen weakness. Indications thus far suggest otherwise.

USD/JPY is currently oversold and catching support in an area that’s been showing support for six weeks. Be careful if pushing the short-side here. Instead, wait for resistance to show at a better price before looking to trade the short-side swing lower.

This week’s USD-weakness continued that theme of EUR/USD strength that sparked during last week’s ECB meeting. Now EUR/USD is working on what looks to be a legitimate up-trend on the 4-hour chart. And just like we saw above with USD/JPY, some significant long-term Fibonacci levels have come into play of recent. The area of relevance on the EUR/USD is 1.1212, which is the 61.8% retracement of the lifetime move in the pair (low from the year 2000, high from 2008). Perhaps more importantly, this has been a key level in the pair for the past year. On the chart below we’re looking at the monthly setup in EUR/USD with that Fib retracement applied: 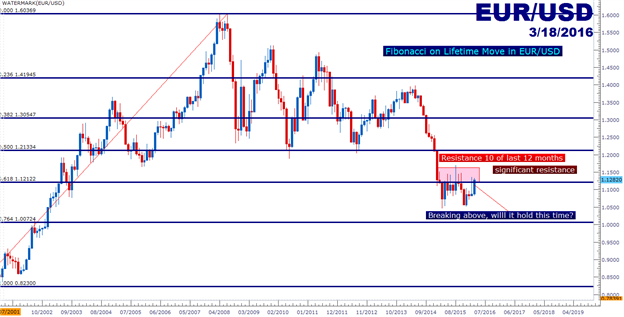 This level at 1.1212 was re-engaged last January, and since then price action has been unable to leave it behind. This was the resistance level that capped the pair’s gains after last week’s ECB meeting, and this week’s FOMC announcement finally gave the pair the juice to break back above. Traders can look for support at this key level before initiating long EUR/USD positions. This would be an example of using old resistance as new support, allowing the trader a relatively tight stop so that if the top-side move doesn’t continue the loss can be mitigated. 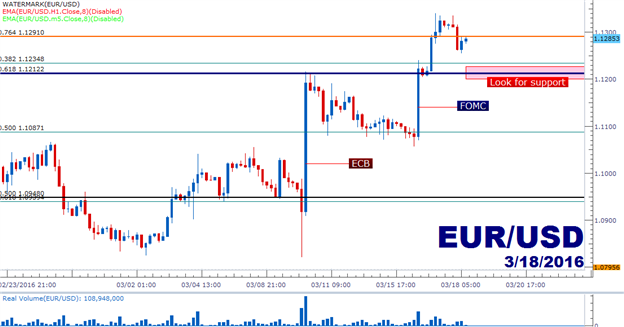