Prepare to Usher in Another Wave of Central Bank Volatility: A Preview

- Non-Farm payrolls printed with an aggressively bullish headline number of +242k jobs added to American payrolls, but the internals of the report weren’t all that great. Christopher Vecchio outlines this morning’s jobs report.

- The next two weeks bring markets three of the largest and most pivotal Central Banks with rate decisions, meetings and press conferences that can invoke volatility henceforth. We preview each of those meetings below.

- Many of these themes or ideas are moving along with what the DailyFX team has been looking for coming into this year. To access our top trading ideas and our forecasts, please click here.

This year started off on very rough footing. Near immediately the open of the New Year saw massive risk aversion envelop global markets as Chinese equities went haywire and the recently installed circuit breakers turned into the World’s most aggressive sell signal. Those circuit breakers were removed in short order, but that didn’t stop the pain: The selling persisted throughout January and heated up again at the beginning of February. It didn’t stop until day two of Janet Yellen’s Congressional testimony , and you have to remember that stocks were sitting at lows as that testimony began. During that testimony, Ms. Yellen took a slightly more open stance to the prospect of negative rates than she had under questioning the day prior. This, apparently, was taken as a largely dovish signal from the head of the Fed as rate expectations for the remainder of the year got priced out of the market. But perhaps more importantly, risk assets started moving back from the ledge: Order was restored, and stock prices were back up. 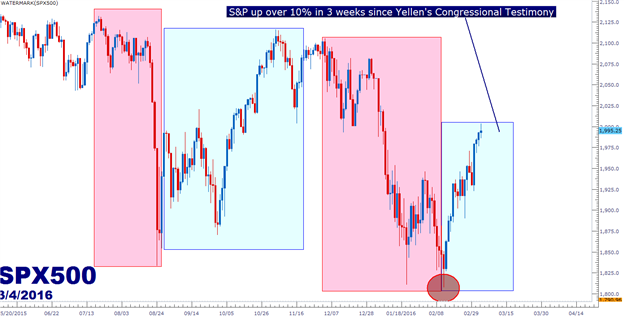 But if we logically deduce the primary culprit of this initial pain, we can draw the motivations for risk aversion right back to Central Bank policies. We outlined this on December 31st of last year. Had much changed between December and January? Or December and February for that matter? China was teetering the entire time, commodities had already started their descents and many emerging markets were looking to be in very precarious positions. We even pointed out as much just two days ahead of that FOMC rate hike in the article entitled, Is the World Ready for a Rate Hike From the Fed. Of particular interest in that article is the bear flag that had set in on Chinese A-shares on the Shanghai Composite (first chart). Since, that flag has been soundly broken. 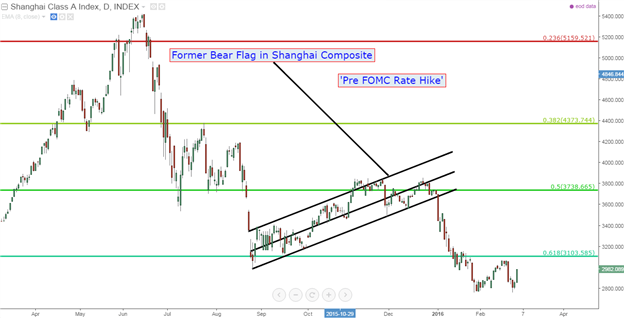 But, in December, the Fed felt the global economy was strong enough to embrace a rate hike. Then fast forward a couple of months and add in a few more data points (which weren’t even all that bad), take the S&P down by 15% and all of a sudden those factors alluding to rate hikes have been completely reversed? The Fed has two mandates: Employment and inflation, and this morning we got just our next piece of ‘not that bad’ US data as NFP printed at 242k, indicating that their two mandates aren’t performing all that badly right now (inflation remains lackluster, but employment is brisk).

The big change in December was Central Bank policy. The ECB avoided adding to QE at their December meeting, as did Japan. And when the Fed hiked along with a dot plot matrix expecting for a full four hikes in 2016, markets construed this as an end to the easy money policies that have kept stock prices strong in the wake of the Great Financial Collapse. The punch bowl was being pulled away, that’s the reality from December that set-in during January and further in February. It didn’t stop until Ms. Yellen took her seat in front of Congress.

Over the next two weeks, we hear from the big three Central Banks; and for each it appears that markets are beginning to string together some hope for additional stimulus or at the very least even more loose monetary policy, which appears to be showing diminishing marginal returns. Will they deliver? Can they?

If reading the tea leaves today, the ECB is probably the most likely to increase QE. We had alluded to as such last year, as the ECB has somewhat of a pattern of disappointment. After announcing that they’d make an announcement of European QE in May of 2014, the bank disappointed in June when they had nothing to offer. But a month later, they came to the table and opened up a monster QE program. This led to a ~3,500 pip run lower in the Euro that all of a sudden stopped in March of last year.

Then in October as EUR/USD was continuing to strengthen within the bear flag formation, Mario Draghi mentioned that the bank would ‘re-examine’ their QE policy at their December meeting. This was largely construed that the ECB would increase QE (just like that initial May 2014 announcement). But when December’s meeting came, there was no increase to QE (a disappointment very much resembling that of June 2014). But now that we’re nearing the March meeting, will the bank finally come to the table with what it is that markets are so obviously waiting for (an increase to QE)?

The Euro has been selling off over the past two weeks in what appears to be positioning-in ahead of this Central Bank meeting. As data has worsened, probabilities for an increase to QE have gone up, and the Euro has sold off. We discussed the strategy last week in the article, EUR/USD Falls to 1.1000, Is it Time to Get Short Again? 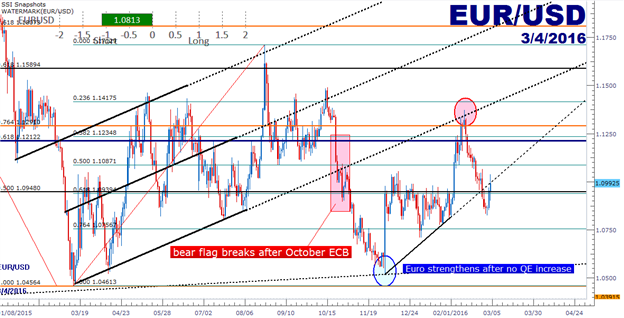 The Bank of Japan is quite a bit more stretched than the European Central Bank as the BoJ’s QE policies have been active for quite a bit longer, and this is why I had called the Yen the ‘safe haven of choice,’ as risk aversion first began to rear its ugly head last year. The big question here is whether or not Japan is nearing the point of throwing in the towel. I realize this may sound outlandish, for a Central Bank to admit defeat, but the move to negative rates last month was puzzling in the fact that it seemed ill-timed. This was an experimental way for a Central Bank to investigate more loose monetary policy, and it gives the illusion that the BoJ may be reticent towards extending any more QE.

As outlined by my colleague Christopher Vecchio, the Bank of Japan already owns a huge portion of the Japanese Government Bond market. This was so pronounced that the bank began buying stocks with QE at their previous surprise announcement (Halloween 2014). But this hasn’t really worked out all that well, as they bought-in virtually near the top. The initial throes of volatility in August and September brought on a -5.6% drawdown, FOR A PENSION FUND! This is why pensions and social security investments haven’t been driven into stock markets before, but in the ZIRP-y world of low rates in which Central Banks already own most of their economy’s bond market, there really weren’t many other choices.

So the BoJ is probably going to think long and hard before doing any more QE. But fully expect them to do something with rates, as the response to their move to negative rate policy has been brutal, as we outlined in the article, Nikkei Takes 5% Hit, Negative Rates Fast Becoming a Cautionary Tale.

Their attempts to weaken the currency have only led to rampant strength, so it wouldn’t be surprising to see them try to surprise markets again with some policy designed to turn around those capital flows. 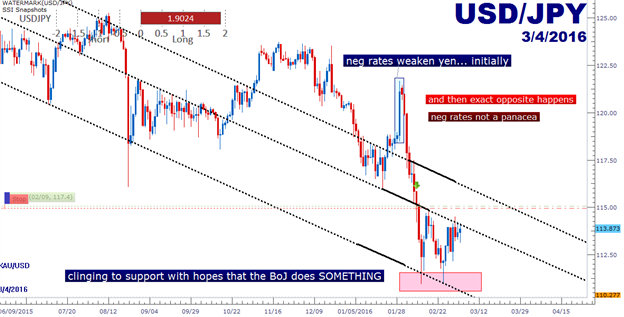 I have far less to say here because frankly, nobody in the world knows what’s going on. And you don’t need to listen to me complain, there are already plenty of people doing that for us.

But if we reduce the current issues to the least common denominator, which can always be helpful when trying to plan trades, it would appear that the Fed is caught between a rock and a hard place. The logical answer for the world is ‘why does the Fed need to hike! The world is melting away!’

But matters aren’t so simple: This is a question of short-term pain avoidance in terms of longer-term catastrophe insurance. ZIRP is emergency policy, pure and simple. It was designed after the Financial Collapse when the Financial system was literally on the precipice of disaster. Loose monetary policy and easy money helped to bring things back. But this wasn’t necessarily bullish, was it? This was merely a Central Bank feeding liquidity into a market that needed a place to go, so logically asset prices rose to go along with liquidity injections.

But each attempt for the Fed to ween markets off of this easy money policy were met with stock declines. And those stock declines fanned fears of ‘another financial collapse.’ And that weakness was offset with even more loose monetary policy, and even more easy money.

Again, the problem isn’t all that apparent if only looking in the immediate future, but imagine the damage that’s been done to savings, retirements and pension plans? These are investments that need conservative returns because if you invest them in the stock market, well, they’ll see the same type of rampant volatility that brought on a near 6% drawdown in two months for Japan.

I bring this up because the Fed didn’t have to hike in December and they still did it. There is a reason to remove ‘emergency-like’ policy from markets: To stop distorting asset prices and to allow for individuals to actually begin to participate in the investment cycle.

There isn’t an easy answer here, nor is there a historical precedent to draw from. The big question is whether the Fed is going to yield to equity markets in honor of their implied ‘third mandate’ or whether they’ll look at the big picture.

As of right now, the rest of the world isn’t expecting as far as tightening is concerned as rate hikes have been priced-down for the rest of the year, and this may be a mistake. 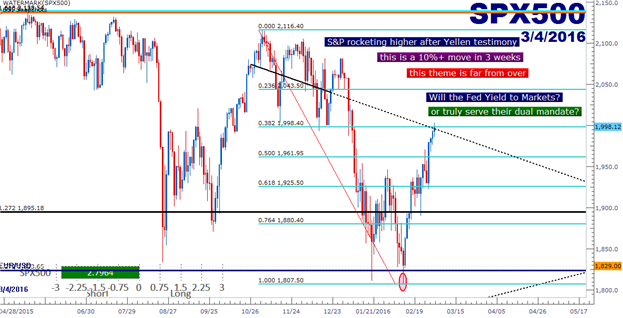