-An upcoming G20 meeting in Shanghai over the weekend appears to have stoked hope for Central Banks to discuss fiscal growth strategies.

- The Dollar remains well bid across-the-board; you can look to pick this off in various pairings by watching SSI for stretched positioning ratios.

All eyes are on Shanghai this weekend for the upcoming G20 meeting. Despite US Treasury Secretary Jack Lew’s pleas earlier in the week for investors and markets to keep expectations low, it appears that at least some strength in equities has shown over the past two days in anticipation of this meeting.

The core of the problem for global markets right now is a currency issue. After Japan’s stealth-like move to negative rates three weeks ago, the fear of competitive devaluations began to get a lot more real. This is the prospect of an economy trying to weaken their currency simply to derive trade flows from their neighbors. Good for the economy that weakens, bad for everyone else especially at a period when global growth is so questionable. Competitive devaluation is a nice way of saying ‘currency war,’ which is a term that should be avoided out of both accuracy and respect, as anyone that’s had an actual relationship with a real war can attest. In a real war people lose lives. With currencies we’re watching Central Banks try to push numbers: Big difference.

But this topic was touched on by Mr. William Dudley of the NY Fed earlier in the month. After Japan went negative the United States was sticking out like a sore thumb. This was the lone major economy looking at higher rates, and further to that point, it was one of the few Central Banks that wasn’t openly deflecting capital flows. Europe has been on negative rates for almost two years now, and when this is combined with money coming out of China and now the threat of even deeper negative rates in Japan, there was simply no other place for capital to flow.

This brought strength into the US Dollar which became just another headwind for growth as the US grappled with continually falling commodity prices. As that US Dollar got stronger and stronger, more and more pressure was added to US exports. As Mr. Dudley pointed out, this will, eventually, pull the United States back into recession along with the rest of the world.

The Fed, however, really seems to be struggling here. They continue to use antiquated models that have difficulty accounting for a truly globalized economy by micro-managing lagging data prints that said one thing yesterday but another today. Central Banks haven’t yet adapted to globalization, and the constant pattern of bubble-boom-bubble-boom-bubble that we’ve seen in the S&P 500 since the mid-90’s is indicative of this.

Ever since the mid-90’s, global markets have been one constant rollercoaster, and there are likely a few contributing factors here: Globalization, the repeal of Glass-Steagall in the United States (which certainly had impact outside of the US as well), and the popularization of the internet which has enabled information flow to the average person on a massive scale. Twenty years ago, we read what the newspapers wanted to report. Today newspapers are basically dead and anyone in the world that wants to report on something or discuss a matter can do it (where allowed by their governments, of course).

The world has changed quite a bit in the past 20 years, yet Central Banks are using the same tools with the same results and expecting something better to all of a sudden happen.

Further to that point, the past six years have seen multiple recurrences of Central banks stoking markets with liquidity that has mostly ended up on bank balance sheets. If you remember the Yellen testimony from a couple of weeks ago, you may remember the repeated questions that she fielded on the topic of IOER, or ‘Interest on Excess Reserves.’

This is extra money (beyond reserve requirements) that is held by banks on deposit at the Central Bank. The Fed is paying interest on this money. The ironic part is that much of this ‘additional deposit’ is the same QE money that was given to these banks to take that toxic debt off of their books. This amount has ballooned from a few hundred billion two years ago to a few trillion today.

And furthering this saga, some of that cash is from banks in Europe or Japan that flowed back into the United States after these economies moved to negative rates. And as Europe or Japan goes even more negative, there is even more incentive for banks to send cash to American branches to put it on deposit with the Fed to earn some element of interest, and this just speaks to even more USD strength as Mr. Dudley had alluded to two weeks ago.

So where is this all going to go? Nobody knows, this is a really messy situation that the world has never really seen. Sure, we’ve seen difficult economic periods in history such as stagflation in the latter 70’s, but never has such a globalized economy faced so many pressures at the same time. The one fact that appears likely from here is that there aren’t many Central Banks in the world right now welcoming capital flows, and it seems as though most economies are looking for weaker currencies. That is traditionally a strong environment to own Gold, just as we saw in 2008-2011 when the world was in a similar situation. And sure enough, ever since Ms. Yellen entertained the prospect of negative rates at that Congressional testimony, Gold has seen a strong series of bids.

On the chart below, we’re looking at the current setup in Gold (XAU/USD). We’ve seen a considerable breakout taking place over the past month as rate hikes out of the United States have become less likely. We’ve just broken above a 2+ year channel, and now price action is digesting. Traders can look to buy support at Fibonacci levels at 1,217 or 1,200 to look for top-side continuation. If Central bankers around-the-world continue in their current stance of doing the same old thing, this setup could shine in the coming months, similar to the 2008-2011 run. 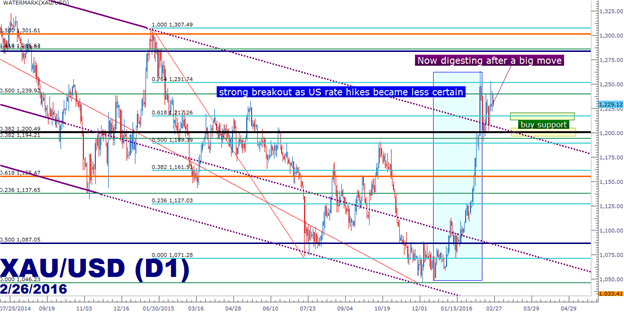 The Importance of Adaptation, for both Central Banks and Traders

One of the fastest lessons that a trader has to learn is the importance of adaptation. A lot of smart folks have failed as traders and a ton of capital has been lost on misguided theories. As a trader, failing to admit that you’re wrong can bring the death of a career. It’s not about pride or ego, it’s about survival. Unfortunately it usually takes losses, margin calls and missing capital to learn this lesson; but once it’s learned the trader will often view the world with a more articulate set of priorities. As in, the market is never ‘wrong,’ even when it’s doing something outlandish that you didn’t expect.

If you want to trade or if you have been trading but haven’t been seeing the results you wanted or hoped, in many cases, risk management is the problem. Check out this article for a deeper explanation of what separates successful traders from non-successful speculators.

But it’s often our limited capital that will teach us that lesson, right? Because an individual trader can get a margin call really quickly off of just one or two bad ideas, so we have to learn fast. Central Banks, on the other hand, have been printing money. So even though these measures have shown little signs of actual progress in the ‘real’ economies that they’re supposed to represent, Central Banks don’t learn this lesson nearly as quickly. But perhaps more worrisome, it’s not their capital that they’re trading with.

The trader’s job, when reduced to the lowest common denominator is fairly simple. It’s to make money by forecasting price movements. But no human being can really see the future, because that’s outlandish. So, we’re all operating with imperfect information, the Fed included. And because of this we have to always manage our risk.

This means that we have to question our own views and opinions, because just like the Federal Reserve, sticking out is a danger to our continued survival, and we are literally watching history be made here.

So, while Central Banks around the world continue to struggle to figure out how to manage monetary policy with enhanced debt loads in a truly globalized economy where events in China have repercussions the world-around, markets will likely continue to remain volatile. Eventually they will have to adapt, in some way.

For the trader, we’re going to have to be ready to adapt quite a bit to account for this enhanced volatility as these major headwinds get sorted out.

For right now, global growth is weak and near-term forecasts aren’t looking very attractive. But this isn’t really all that different from the past six years, is it? We’ve had six years of ‘bad is good’ as bad news merely meant higher probabilities of more Central Banker support.

What This Means for the Trader

The most important lesson is risk management. This speaks right to the ‘a lot of smart people have failed at this’ quote. Your intelligence plays little role in your ability to predict future prices because, again, that is impossible. In some cases intelligence may even work against you as a trader it can build stubbornness.

But perhaps equally important is your world-view. As a trader you always, always must be looking forward. The past is the past, and while that may allude to the future it won’t always perfectly predict it. If you spend too much time focusing on what’s already happened you’re going to completely miss what is happening (and what will likely happen), just like the Fed when they hiked rates in December. New stuff happens all of the time and that’s what makes this world great. It’s also what can make it a very scary place. Globalization is a complete game-changer, and for a long time it was looked at as a pure positive. We’re starting to feel some of the negative side-effects of it right now as emerging markets get hit on the back of falling commodity prices.

So begin to plan for the next phase: Central Banks are scared. They’re likely to act, in some way. And if the past six years are any guide, they’re watching stock prices and will react as markets fall (as they have).

Price is always right, regardless of how well-heeled our theories are.