S&P, DAX and Nikkei Teeter as China Makes Moves Under the Surface

- The post-Yellen risk rally appears to have run its course as many global equity indices have started moving lower in the prior trend-side direction. We look at setups below in the Nikkei, DAX and the S&P.

- Since re-opening from the Lunar New Year, Chinese authorities have announced a litany of new measures. Is this enough to contain a massive debt issue? And is it too little, too late? Solving debt with more debt has traditionally been a difficult strategy.

- If you’re looking for setups and themes, sentiment can be extremely helpful. At this link, we explain our SSI indicator. Please click for more information.

Hints of Risk Aversion: In my webinar yesterday we looked at the resistance formations that were showing in many equity indices, and this was essentially a two-day pattern that saw what could’ve been tops set-in on Monday as many of these indices stalled near resistance, and this was made more interesting by follow-through lower on Tuesday.

Since then we’ve seen continued selling throughout Asia with the lone exception of strength being seen in China. And in China, the late-session ramps were back, as the Shenzhen Composite erased a -1.6% loss with an hour and a half left in trading to close relatively flat (slight loss of -.04%), while the Shanghai Composite actually lurched into positive territory in that last gasp of strength ahead of the close to finish the session up by .88%.

The DAX out of Germany broke below a rather aggressive bear flag formation yesterday. At this stage price action has runaway to the downside, but traders can wait for a pullback to try to initiate shorts. Potential resistance can be sought out at old support in the 9,350-9,400 area. Below is the hourly chart:

While the DAX appears to be showing signs of breakdown, the Nikkei is currently trading near support. Surprisingly over the last week the Nikkei has been very range-bound, even though we’ve been seeing regular +/- 2% days. On the chart below we’re looking at the current range in the Nikkei, and notice that we’re very near a confluent area of support. Selling while at support can bring unsavory consequences, so traders are likely going to want to either a) let price move back up to resistance (the triple top) and look to sell again or b) let price break this confluent zone of support, wait for resistance in that same vicinity and then trigger the short position:

And the S&P is probably showing one of the ‘cleaner’ technical setups right now, and while I wish I could tell you that ‘cleaner’ means a higher probability of play-out, it does not. It merely means that past price action has held fairly well with previously-supplied structure. This makes strategy simpler, but it doesn’t necessarily increase probabilities of success and traders need to know that going in. Risk management is still important, even if you think you’ve got the move.

The confluent zone of resistance that we mentioned on Monday in the S&P is continuing to hold. This zone at 1,950 has two different key Fibonacci retracement levels within a few points of each other, and combined with the January swing-high this made for an interesting point of resistance.

Now we’re at the point of seeing new short-term lows come-in to the market, and this indicates that the setup in the S&P is a little more developed than what is being seen currently in the Nikkei. Given that price action is just now breaking to new short-term lows, traders want to be patient here. Let it continue breaking lower to prove that bears might be able to continue pushing prices lower. This is like an ‘activation’ for a short stance. At that point, traders can look to sell by waiting for short-term resistance on the hourly or four-hour charts, as indicated by an extended top-side wick: If this happens near prior support, even better.

Curiously we saw another Chinese risk factor highlighted last night as the Yuan broke below another level of support (given that it’s the denominator in the USD/CNH quote, this would be resistance in that pairing). And this is what many are watching for signs of the Chinese debt load to begin to wobble. As China continued their incredibly consistent stream of growth through the 90’s and 2000’s, considerable debt was taken out to fund that growth. One estimate pegged the total amount of debt for China at $34 Trillion, with $14 Trillion taken out between 2007-2014 to combat the forces being felt from the global Financial Collapse. Hua Chang Securities, a Chinese brokerage previously estimated that 45% of new total social financing will go to pay interest on previous debt. And while this is a strain to be sure, the prospect of rising non-performing loans is what makes this such a threatening theme, and that number is up for wide debate. China’s official government numbers peg this at 1.5% of outstanding loans. Some third party estimates range from 6-21%. And this is what makes this such a timely issue, because as non-performing loans increase even more pressure gets added to Chinese banks holding that bad debt and this is where contagion can spread if not contained. Borrowers not paying back banks put banks in a liquidity crunch, and that’s when lending dries up; negative rates or not.

So we can make the statement that this divergence is one of the most important data points for the world right now, and it will likely remain in wide dispute between Chinese government estimates and third-party tallies.

The logical conclusion to many was that China would devalue the Yuan to recapitalize their banks in order to assist them in offsetting non-performing loans while also lowering interest rates to enable these banks to refinance debt at a lower cost. So further Yuan weakness has become somewhat of a boogeyman, and as the Yuan’s weakened that’s when we’ve really seen stock prices move lower. The below chart illustrates this correlation.

As USD/CNH has strengthened (Yuan weakness), Stocks have shown weakness 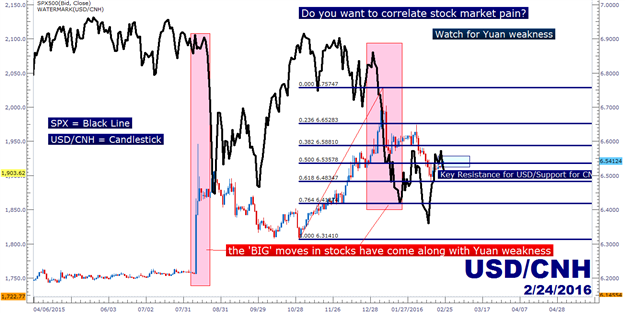 There was only one issue: This was the opposite of what the Chinese government was doing. They have actually buying Yuan in order to keep the exchange rate artificially strong. Chinese residents have been sending money out of the country in droves (which is another data point highly in dispute), and in order to keep the exchange rate from melting down in a very visible manner, thereby raising red flags around the world, China has been using their foreign currency reserves to keep the Yuan strong.

If China wants a weaker Yuan, they just have to stop buying it and it’ll likely naturally weaken with market forces (and this would allow them to save precious foreign currency reserves that, likely, they will need in the coming months to help off-set rising non-performing loans). This is also generally a boost to exports, but for China the question of this benefit is negligible. China is already the low-cost leader for global production, so it’s difficult to further attract trade flows simply from price competition. It brings little benefit to undercut yourself (this is actually a hallmark of deflation).

And perhaps more troubling, the very act of the Yuan getting weaker means other major currencies get stronger. This is goes directly against the strategies of Central banks in Europe and Japan, and likely, this is a contributing factor as to why the Bank of Japan made that stealth move to negative rates three weeks ago. This is somewhat of what was alluded to by Mr. William Dudley earlier this month, when he highlighted that the United States being one of the lone economies looking to increase rates exposed the US Dollar to capital flows which, eventually, can become a drag on exports.

So a weaker Yuan is something that much of the world is worried about right now. The government has controlled the currency with a rather heavy hand over the past six months, but as they showed just a month ago, they aren’t going to let speculators take a free ride on Yuan weakness while the Chinese government is propping up the other side of the market.

This makes the idea of short Yuan not-all-that attractive. Regulatory/government risk is a tough one for the trader to manage because it’s indefinable. As we’ve been saying for the past six months, for those that want to make a ‘play’ on China, look to buy the Yen.

How does China appear to be handling this pressure? By taking on more debt and adding more policies to steer capital flows. January saw the highest issuance ever of New Yuan loans, many of which could’ve been taken out to pay back principal on non-Yuan loans in anticipation of future weakness (If you know Yuan will get weaker and USD stronger by relative metric, that USD-denominated debt will also grow on you as your currency weakens). Last week the government rolled out measures designed to stimulate the housing market, along with a slew of other new measures and then over the weekend they sacked the Chairman of the CSRC (China Securities Regulatory Commission). And then there were even more measures. This has traditionally led to a short-term boost for stock prices, but the timing of such a move is interesting given the negative press that the CSRC received for the stock market pain over the past six months. It’s rather odd that they decided to make that cut when Chinese stocks were nearing a monthly high.

For now, Chinese stocks are working on the bear flag formations that began around the beginning of the Lunar New Year. On the chart below, we’re looking at Shanghai A-shares with the previous bear-flag formation applied. 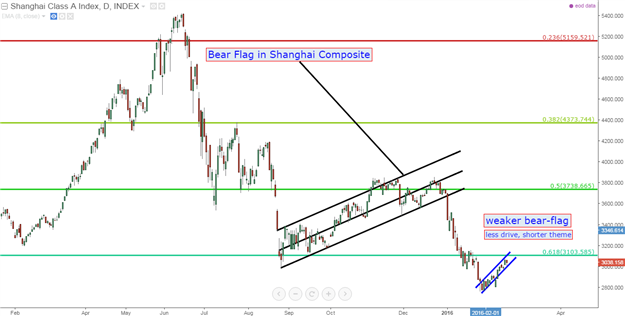