- The saga of the Euro continues, and in the most recent installment investors around the world are waiting for an increase or extension in QE. The ECB teased this in October, pulled back in December, and then re-mentioned in January. Will they finally deliver in March? Judging by price action, some traders think so.

- As we discuss in the article, SSI can be really helpful in analyzing bigger-picture or longer-term trends. Click here to learn more about SSI.

The past twenty months have been another extension in the story of the Euro, and this will likely be something that will be studied in political science classes for years to come, as the six years since the Financial Collapse have been a series of challenges faced by the continent. The Financial Collapse exposed the fragility of the single currency, and it’s basically been a non-stop story of political and economic intrigue ever since.

In the wake of the Financial Collapse sovereign debt began to become an issue for many countries in Southern Europe. Previous to the Euro, whenever one of these economies would face turbulence they could simply weaken their currency to attract trade flows, and given their prime geographic location, they could usually inject much-needed stimulus into their economies very quickly. But as part of the Euro and further, as part of the Supra-National trade bloc this flexibility was no longer there. And perhaps more to the point, many countries in Northern Europe were booming. The prospect of a weaker currency there only exposed the prospect of unsavory inflation. And this is when we began to see bifurcation in Europe, when investors would buy debt from Northern European countries while eschewing debt from their Southern European counterparts.

This is when the world began to hear about the PIIGS of Europe, and yields for debt from Southern European countries shot higher. This made it more difficult for these Southern European countries to recover, and when combined with an artificially strong currency (kept strong by those Northern European states robust economies), there was little hope. This led to persistent selling in the Euro through the summer of 2012 until the European Central Bank president said that the bank would do ‘whatever it takes’ to keep the Euro together. This provided a much-needed dose of confidence at a critical time, and this led to Euro strength for the better part of the next two years.

There was just one problem: That stronger Euro made it even more difficult for Southern Europe to recover. Bond yields for many of these countries receded on the prospect of an ECB backstop, but with a constantly strengthening Euro much of Europe still faced pressure. That’s what led to the May 2014 announcement that the ECB was investigating measures and would have an announcement soon. That formalized announcement came in July of 2014, and this led to a major drop in EUR/USD that saw a near 3,000-pip movement over the next nine months.

But as European QE actually began in May of 2015, EUR/USD began to strengthen. Somewhat of the opposite of what was expected. And we spent the better part of last year watching EUR/USD trend higher in the bear flag formation and again, this makes the prospect of recovery in Europe less likely given the hit to trade flows that comes along with a stronger currency.

That bear flag did not break until the October ECB meeting in which Mr. Draghi pledged that the bank would re-examine QE at their December meeting. This led to five weeks of weakness moving into that December ECB meeting. But when no increase to QE was announced, the Euro shot higher and has been in an up-trend ever since. Three weeks ago we actually saw price action in EUR/USD move up to resist off of the bottom of that prior bear-flag formation. And since that inflection in early February, the Euro has been trending lower as we near the next ECB meeting on March 10th. 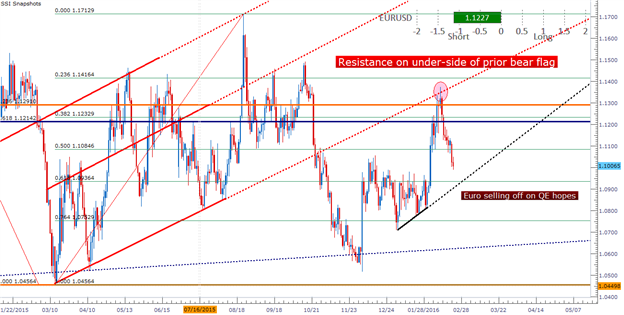 Getting Short the Euro

Continued short-side run in the Euro will likely be determined on when the bank decides to increase or extend their QE-outlay. The December meeting highlights these themes on the Euro, as we got a cut to deposit rates with no additional QE announcement and the Euro popped higher. So, from this simple deduction it would appear that the Euro weakens on QE and not necessarily on cuts to the deposit rate.

We had outlined strategy for getting short EUR/USD back in September as that prior bear-flag was still building. And in it, we included two ways for traders to look to get short EUR/USD ahead of the October ECB meeting.

The first was to watch SSI, or sentiment in the pair. SSI is a contrarian indicator and indicates when retail positioning flips between net long and short states. As a contrarian indicator, flips to net long are bearish and flips to net short are bullish. As indication of this contrarian read, the chart below is taken from the Speculative Sentiment Section of DailyFX PLUS. Positioning is represented by the green or red bars in the background. Green indicates net long retail positioning, while red indicates net short.

Notice that the initiation of the two most recent phases of EUR/USD weakness, after the QE announcement in May 2014 and again in October of last year.

Taken from DailyFX PLUS, SSI; prepared by James Stanley

The second method mentioned was to wait for a technical entry, and with price action recently dropping down to find support at 1.1000, we may have that level to work with. Just as we treated the bear flag back in September of last year, we can wait for a break below support to indicate that bears may be able to continue driving prices lower. Once support breaks, we wait. Let price action rip higher in order to find a more attractive entry. In many cases, new resistance will form at old support, just as we had seen on that bear flag last year.

Traders can do this with the 1.1000 level as we near the next ECB meeting on March 10th. Traders can wait for a break below 1.1000 to indicate that bears may be able to continue pushing price action lower, and then after a ‘lower-low’ comes in, traders can look to get a short position off of old support (and new resistance). 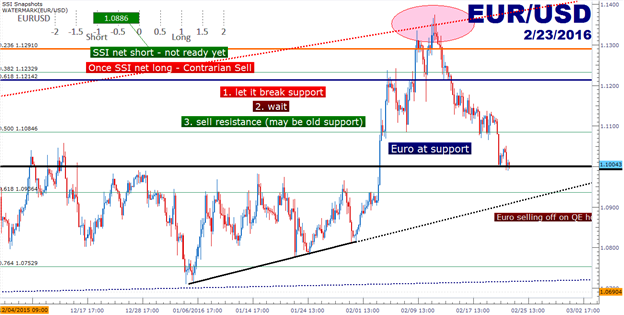