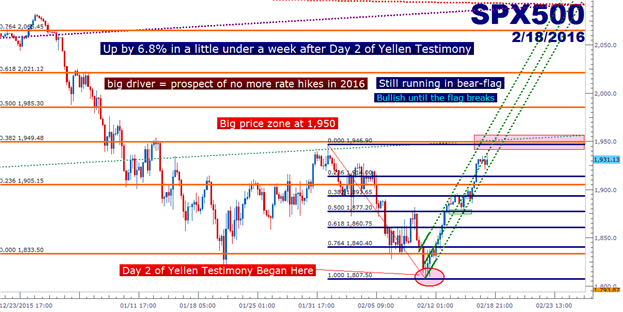 Vacillation Around Rate Hikes Has Become the Primary Driver

- While much of the world is watching for correlations, there is one theme that appears to stand above the rest in pertinence to risk trends; and that is the Fed and the expectation around 2016 rate hikes.

- The S&P is up by nearly 7% since last Thursday morning, which was Day two of Chair Yellen’s testimony in front of Congress. So while Oil has remained volatile and ‘oil deals’ have been floated but failed, stocks have continued running higher on the prospect of ‘looser for longer.’ This clearly illustrates market drivers at the present. Lower oil prices can definitely impact the American economy, but that transmission will likely not be direct. (Companies get hit by lower prices, then report, then stocks get hit).

- Zero-rates and QE-hopes likely won’t last forever, as Central Bank actions have appeared to produce diminishing marginal returns, with investors getting more and more aggressive towards trying to front-run these moves. This dampens the effectiveness of the eventual policy action; and this highlights the antagonistic relationship that currently exists between markets and Central Banks.

Most equity markets are trading higher on the morning, extending the gains from yesterday. The release of the January Fed minutes yesterday helped to solidify gains; and this was essentially on the back of a rather supportive set of minutes from that January meeting. Given that this extended the move that had begun last week at day two of Chair Yellen’s Congressional testimony, it would appear as though the big push factor here has been rates and the prospect of continued loosened conditions out of the world’s largest national economy. This run higher in stock prices has also come with the simultaneous reduction in 2016 rate hike expectations; so as we’ve seen 2016 get priced out (investors no longer expecting a cut at all in 2016, and, in-fact, now looking for a higher probability of a cut as opposed to another hike), stock prices have shot higher on the prospect of continued loose monetary policy.

The S&P is up by nearly 7% since last Thursday morning, and all that we had to begin this drive was Ms. Yellen saying that negative rates are on the table as a potential policy option. She didn’t say that rate hikes are off the table, nor did she say that the Fed was going to yield to the global pressure being felt at the time of that testimony. Markets are running on the simple prospect of no additional rate hikes out of the US this year. So, this wasn’t necessarily ‘good’ news as much as it may have been ‘less bad’ than what was initially expected. The big question is whether or not the Fed will, in fact, back off of rate hikes. We have no evidence to indicate as such, and this would appear as though markets are attempting to front-run the expected ‘backing off’ of rate hikes from the Federal Reserve.

The chart below illustrates the current setup in SPX500. We’re still running within the bear flag formation that we’ve been discussing, and as long as prices are trending higher this aggressively – this is not a market to get short in. Instead, traders can wait for either a) resistance to offer a potential short-side entry or b) a break of the bear flag to indicate a return of the down-trend, at which point resistance can be sought out.

What it appears that we have here is another example of markets attempting to front-run Central Bank actions. This has become somewhat of a theme after QE began in the United States, in which investors could essentially sell USD across-the-board and just wait for the inevitable dilution in the Dollar to push those risk assets higher (imagine a fraction with a constantly decreasing denominator: The value of the fraction constantly grows by the simple reduction of the denominator). After the Dollar’s dive, it was Japan’s turn and they kicked up their QE program in 2012 and this led to another smooth trend of Yen weakness that hedge funds could pick off. Same story as the dollar, sell the Yen and wait. And then in 2015 Europe joined the fray with their own QE program, and same story – a Central Bank was going to be actively diluting their own currency, and investors could simply sell it and wait. In the case of the ECB’s QE, coming after outlays from the United States and Japan, investors were so ready for this theme that they actually priced it out before QE ever really started. 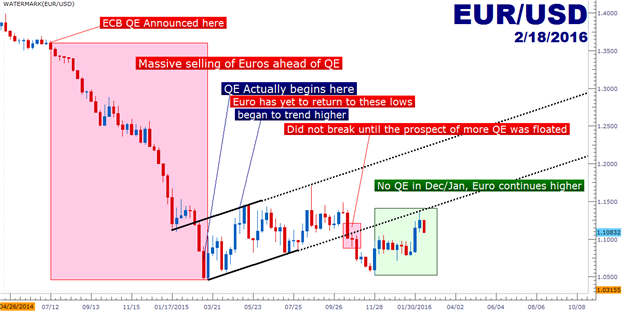 The problem emanates from the fact that markets have become so accustomed to front-running Central Banks that, eventually, when that doesn’t work they’re likely going to be caught flat-footed in the midst of some aggressive reversals; somewhat like we had in January and early February of this year as the world wrestled with the prospect of higher rates out of the United States while contending with the flurry of pressures out of Asia, Europe and Commodities. But these risks didn’t come out of nowhere, did they? We wrote about these to end last year, in parts 1 (Asia),2 (Commodities) and 3 (Rates – the primary pressure point).

But these weren’t new pressures even then, were they? We had the same type of situation happen in August and September of last year. The Fed was largely expected to hike rates in September, and as we came into August pressure out of Asia began to really pick up. The duality of these threats was too much for markets to bear and major sell-offs began in global equities. The Fed then backed off of hiking in September with the ‘hawkish hold’ statement, threatening to hike in December. Markets then sold off on the prospect of a hike in December. Then in Early-October, multiple Fed members floated the idea of ‘looser for longer’ and stock prices came right back up. And as stocks moved back towards previous highs, the Fed felt the economy was strong enough to hike in December, and that’s when we got the ‘Rate Hike Heard Around the World.’ I realize there is a lot of back-and-forth here, so I’ve linked to reference articles that were written as all of this was taking place, and I’ve outlined each of these ‘themes’ on the SPX chart below: 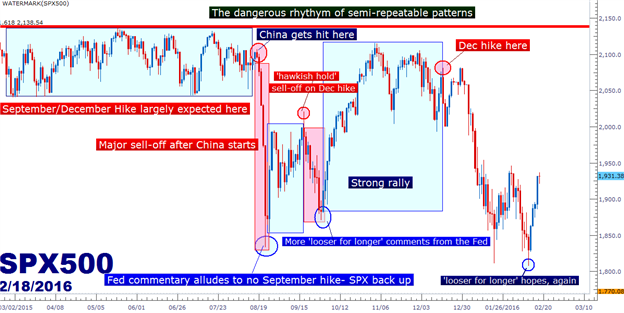 The primary driver continues to be the Fed, because risks in Asia and commodity prices can be absorbed, at least to some degree, by constant liquidity being fired out from the Fed. But the fact of the matter is that there is a very real reason for the Fed to want to get off of this ‘super accommodative’ stance towards monetary policy.

Perhaps one of the big reasons is what we’ve just witnessed. The S&P is up nearly 7% on the back of no real news, just the hope that the Fed will not hike rates. This was simply ‘less threatening’ news than what we were expecting before. Meanwhile, rates are continuing to move lower, and this creates a very real concern for an economy, especially for an aging economy in which a large swath of the population will be retiring over the next 30 years. Pensions, retirees and income investors all depend on the interest paid on relatively safe investments. Those funds are facing a difficult environment right now because their options are a) accept a lackluster rate of return or b) take on way more risk than normal. Neither of these are really great options, and as we saw from the Japanese Government Pension and Investment Fund, taking on too much risk for a pension fund can be a very dangerous thing.

So while much of the world talks about correlations between stocks and oil, or stocks in China/Europe and the United States, there is one theme that stands above the rest as a pressure point in markets, and that is and will likely continue to be the Fed until something material changes.