- This weekend brought another batch of disappointing data out of China as trade figures missed estimates yet again; but regulators in the country are moving to ‘open up’ markets by allowing banks to take on more leverage. Will this be the driving factor for the Chinese economy?

- Global markets rallied while the US was closed for President’s Day yesterday, but this week is likely to bring continued volatility as Fed speeches on each day of the week could promulgate risk trends.

- Oil continues to be a driving economic factor for global markets, but of recent European banks have started to become worrisome as well. Continued negative rate policy out of Europe and now Japan isn’t likely to relinquish the pressure being seen in the banking sector.

Chinese Trade Data Disappointed Again: Over the weekend we received the most recent batch of Chinese trade data, and it wasn’t pretty. Trade numbers have been a red herring for the Chinese economy as further signs of slowdown have been seen. Back in October we looked at a print that actually saw imports sink by a full one-fifth year-over-year. Such a massive change in imports creates ripple effects throughout the world with China’s trade partners, as this means fewer goods from Japan and the United States being sold in Mainland China. The most recent batch of trade numbers came in with a whopping -14.4% contraction to imports versus an expectation of 1.8% growth. Exports weren’t much better, with a -6.6% contraction versus an expectation of 3.6% growth.

The troubling part about these numbers was the export miss as China has essentially been feeding global growth for the better part of the past five years. With this disappointing print, it looks as though that global growth wasn’t as brisk as originally hoped (or thought).

But all was not negative out of China over the weekend. Regulators stepped up to the plate with a flurry of announcements. China’s chief planning agency announced 400 Billion Yuan to be allocated towards ‘special building projects’ available to local governments. And then China’s cabinet discussed lowering the ratio of cash held back for bad loans, which would essentially enable banks to take on more leverage. This could end up being really troubling, as there is large dispute on how many loans are non-performing in Chinese banks. The official China estimate is 1.5%, third party estimates are between 6-21%. This is a huge difference, as is, and enabling banks to lend more only brings on the risk of seeing this number increase. As we discussed in the article, China: It’s Just a Matter of Time, the problem that’s enveloping the economy is debt, and in both of these announcements the problem of debt is being countered by more debt.

On the topic of debt – the big catalyst to Chinese markets overnight appeared to be the report that new loans surged to a record in January. Aggregate financing in China increased to $525 Billion in January, far eclipsing any monthly prints from the previous five years, and is likely in-part due to companies front-loading their 2016 lending strategies ahead of the Lunar New Year. But this is a clear example of a debt problem being countered with more debt, as Chinese markets were in a fairly precarious state throughout most of January, and banks were still massively expanding their balance sheets.

On the below chart, we’re looking at the weekly HKG33 (Hang Seng offset) chart in order to get an idea for what this most recent bounce means to equity markets from the region.

Get Ready for the Fed (Again)

The big news from last week was Fed Chair Janet Yellen’s testimony in front of Congress. As we outlined last week, Ms. Yellen hedged her statements quite well; not taking rate hikes off the table while also giving the sense of support that markets were looking for by saying that she wasn’t taking any policy actions off of the table (speaking specifically towards the prospect of negative rates). This helped to set a low in equity markets on Thursday that primed matters for an ebullient rally on Friday. The Friday rally was sparked by a report that OPEC may be nearing a deal regarding Oil production. That report turned out to be baseless, and we had another rumor of an Oil deal this morning, this time between Russia and Saudi Arabia. But as more details of that deal began to leak out it became apparent that this was far from the production caps that markets have been looking for.

As outlined by myself and Christopher Vecchio in our special report on Oil, this is a politicized matter that isn’t likely to end anytime soon.

And to be sure, commodity prices are a concern for the global economy right now, just as we had outlined back in October when we discussed the leading nature of Oil prices to American corporates. But this isn’t the only concern that the world is dealing with right now, is it? As a matter of fact, there may be a more pressing concern that is potentially exacerbating the pain being seen in commodity prices and the slowdown taking place in Asia, and that’s the prospect of tighter monetary policy out of the United States.

These themes are likely to continue; and now that we’ve begun to see European banks really take outsized hits on the back of continued negative rate policy in Europe, we may have another issue to contend with before long. But the hastening of these factors all really appears to be dialed back to the Fed, as these issues were bursting at the seams when they hiked rates in December. So, the Fed continues to remain a primary focal point for markets.

We get multiple Fed members speaking this week, and this could be one of the primary focus points for risk trends. Today we hear from Patrick Harker, Neel Kashkari and Eric Rosengren. Tomorrow we hear from James Bullard of the St. Louis Fed tomorrow, and this one in particular should be interesting given his usually hawkish commentary getting considerably more dovish in recent remarks. John Williams of the San Francisco Fed speaks on Thursday, and Ms. Loretta Mester of Cleveland speaks on Friday.

Each of these Fed speeches can tilt risk trends. For now, the S&P is looking bullish on a short-term basis as price action continues to trend higher in the bear-flag formation that we mentioned last Friday. Notice that recent resistance came in at the 1,893 region, which is the 38.2% Fibonacci retracement of the most recent major move. The price zone in the 1,875 vicinity is particularly interesting for the day. Should price action find support, this could open up the possibility of top-side plays within the channel. Should that price break, then traders can look for a return of the bearish posture that had dominated markets last week. 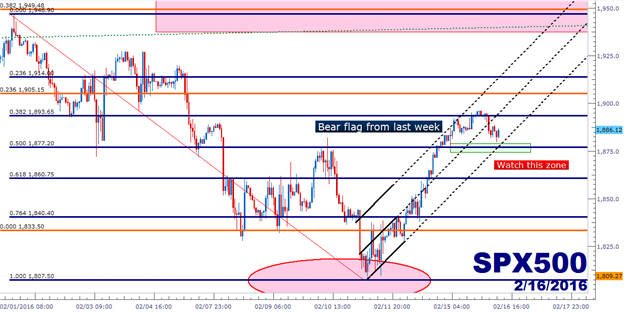