- The US Dollar put in a significant move of weakness after dovish comments from Mr. William Dudley of the New York Fed were construed to mean lower probabilities of deeper rate hikes in 2016.

- After these comments, markets priced out all rate hikes for 2016.

- There may be another driver for the Fed to kick up rates, and this may be one of the reasons that we’re so deep in this conundrum in the first place. The US Dollar is still within a bullish pennant formation, and should support develop over the next couple of days, this can be an attractive area to begin getting long the US Dollar.

The largest growing divide in markets just grew a little bit more, and that’s the divergence between the Federal Reserve and the market’s expectations for rate hikes in 2016. The most recent batch of projections were provided in the dot plot matrix at the December Fed meeting, when the bank hiked rates for the first time in 9 years. In those projections was the expectation of the Federal Reserve to embark on a full four rate hikes in 2016. This was met with wide skepticism as we’d just spent the entire year of 2015 bantering about ‘should they, shouldn’t they,’ and when the bank was finally able to ‘lift-off,’ they were trying to do so while carrying an un-liftable caboose of telling markets they were going to hike four times in the next year. This is why we’d classified rates as being the biggest risk moving into 2016; as that had appeared to be the primary pressure point that had further exposed weaknesses in Asia and Commodities, the other two pressing themes as we came into 2016.

But this was also the easiest risk to offset. We had warned of this just a couple of weeks ago as pressure in global markets began to increase. Because the Fed could simply say ‘no’ to additional rate hikes, and that pressure could recede while bigger themes in Asia or Commodities had already begun to take on a life of their own: Higher rates out of the United States just hastens the development of each. This has become somewhat of a pattern over the past six years as QE has come into play. As the Fed would go with ‘less loose’ monetary policy, markets would sell off. This would be met with the eventual submission by the Fed for even more loose monetary policy, and this process went on for about 5 years. On the chart below, which we looked at yesterday, we can see how the Fed offset each bout of weakness in the S&P 500 with more loose monetary policy:

But after six years of QE and with many stock prices having put in significant new all-time highs, we still find ourselves in the current predicament. It’s becoming more and more obvious that the most profound impact of QE was the artificial elevation of asset prices. We’ve already seen that elevation begin to come out of commodities as demand dropped while supplies (driven by overinvestment as a product of ZIRP) remain high; and now Oil prices are a geopolitical quagmire that’s unlikely to see a quick end. But what happens when that elevation comes out of stock prices?

This is one of the reasons for so much significant pain thus far in the year; because the Fed is no longer supporting markets with fast and loose monetary policy. QE, while doing wonders for asset prices, hasn’t shown much signs of promise in growing the ‘real’ economy. And there is another pressing concern for the Fed to contend with: Retirement. As in, Social Security. Baby boomers have begun retiring in the United States and this means withdrawals from Social Security. This is an already under-funded program that’s essentially a bunch of IOU’s. The money that I pay into Social Security today, as an American, simply goes to pay people that had paid in previously. It literally goes from me to them. So, to say that the fund is in a dangerous state already would be an understatement. But with rates at zero, pension funds and social security cannot grow. This just adds more pressure on an already pressing concern. So the Fed wants rates higher, and not just to help banks make a slightly higher profit. There is a legitimate concern here.

It Always Comes Back to the Currency

But there is an issue with higher rates in the United States right now, and this is what’s created such a brisk turn-around in the US Dollar. Mr. Bill Dudley, the President of the New York Fed, mentioned this in a speech yesterday. In this speech, Mr. Dudley, often considered to be a moderate, so not too dovish nor too hawkish; took an extremely dovish stance yesterday in mentioning weakness in global growth, and the threat to the US Dollar.

As in, if global growth is slowing while the Fed is trying to ‘normalize,’ this could create considerable strength in the US Dollar which will, eventually, create a drag on the US economy. This stronger dollar would be a hit to exports and would make imports in the US more attractive, and this could potentially put the US economy into recession right along with the rest of the world.

This was huge because just a day earlier, Ms. Esther George, President of the Kansas City Fed, mentioned that she felt rate hikes were too late, and that the Fed will maintain their rate hike path until the outlook had changed. This was seen as being a very hawkish statement and this is what led to the deepened declines across markets the day before yesterday, as markets wrestled with the fact that the Fed wasn’t going to do what they’d traditionally done (back off when stock prices go down).

Mr. Dudley’s comments had done something similar in October of last year, as well as October of the year prior. In both instances, markets were heading lower on the prospect of higher rates out of the Fed, but in each instance – Mr. Dudley provided commentary that was being seen as the Fed backing down. We’ll get deeper into that below, but first, let’s look at how the US Dollar responded yesterday.

The US Dollar is trading in a price action formation called a bullish pennant. This is a type of congestion pattern and will often precede a breakout, and is often traded as a continuation pattern. We’re nearing support within the pennant, so we may be nearing an attractive area to get long USD in the next couple of days. Watch the zone of 12,000-12,050 to see if support can build/hold in the next couple of days. 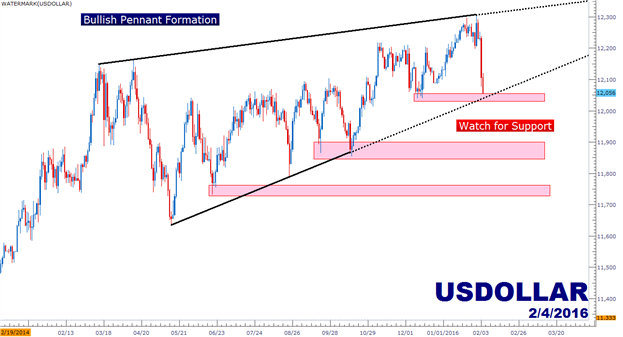 We’ve entered a dangerous period in markets where most signs are pointing down. The danger of where we’re at is that, if the Fed backs down as stock prices weaken (as they did last September), and then stocks rally, the Fed is right back in that launching seat to hike rates further. If this goes on for too long, eventually, people will stop listening to the Fed when they back down because it will become obvious what their goal is: To Hike Rates.

And if they do back down for good, say kicking the next hike expectation out to 2017, how much actual help would that do for the global economy? The world is realizing, right now, that six years of QE had its biggest impact on asset prices, and that’s not necessarily a good thing as those asset prices can come down, leading to losses and pain inside of an economy that’s already struggling with inflation (and maybe even employment).

So, we’re in a dangerous spot. This will likely persist until something changes, and in terms of stock prices, we’re still significantly elevated by many valuation metrics. We had written yesterday of the numerous bear flag formations that have begun to show up across equity markets, and this morning I wanted to provide an update on the S&P 500. I had published a fairly extensive article yesterday with some background and context that you’re more than welcome to check out, and on the chart below we’re looking at an updated S&P chart as of this morning. 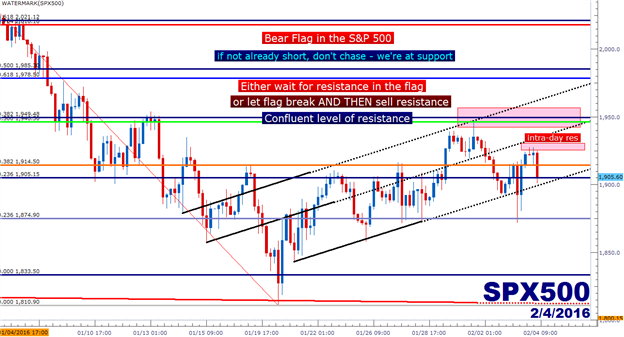