- Another rocky piece of Chinese data printed as Chinese PMI hit a new 3-year low. We discussed the difficulty in dealing with Chinese data in our recent special report, and this most recent set of PMI prints further highlights the conundrum that global investors continue to deal with.

- Global equities outside of China are relatively stable after Friday’s burst on the back of the BoJ’s move to negative rates; but a portion of these rallies may have been end-of-month-flows. The coming days will show us the follow-through impact of the BoJ’s move.

- Negative rates are still very much experimental. Europe has seen negative rates for over a year now, but with the BoJ joining the club; will the deflationary forces of negative rates be too great for the global economy to offset?

The week has started off with another rough piece of data as China just posted a 3-year low Manufacturing PMI print. Levels below 50 indicate contraction, and we’ve been there for some time now. We printed right at 50 for last July and fell below in August. We’ve been sub-50 ever since, and last night saw a new low come in at 49.4.

This is the ‘official’ Chinese PMI number, and that’s an important distinction from the Caixin PMI that’s a 3rd party data point provided by Markit (was formerly provided by HSBC). That number actually tilted up slightly in this weekend’s print, albeit still well into contractionary territory at 48.4. This is what really seemed to spark last month’s chaos as that number came in well below expectations at 48.2, re-firing fears of a hard landing in China. The fact that the Caixin number moved up slightly despite the contraction in the official PMI print has helped to offset some of that concern, because last month after the Caixin disappointment Chinese stocks had to be halted (twice in a few days actually) and last night the Shanghai Composite only moved lower by -1.78% while the Shenzhen Composite was down by -1.04%.

This somewhat highlights the difficulty in analyzing China, especially right now as so much is changing. The second PMI print is watched so closely because some question the statistics that the government provides. I’m not saying that they should be questioned; I’m also not saying that they shouldn’t. I’m merely pointing out that we’re in a situation where investors have begun to feel fear creep into markets throughout January and that type of uncertainty is rarely a good thing.

With this most recent bout of selling, the Shanghai Composite has put in a couple of different bearish connotations. The first, and perhaps most significant is the break below the psychological level of 3,000. This zone had provided support during the painful August/September move, and eventually Chinese stocks moved into an up-ward sloping trend-channel. That channel broke right around the time the Fed hiked rates. The second connotation is what denotes that we may be in for some continuation; and that is the continuation of lower-lows and lower-highs since the beginning of the year. This is a price action indication that the trend lower may not yet be over, as moves higher are merely opportunities for longs to bail out at a slightly better price. 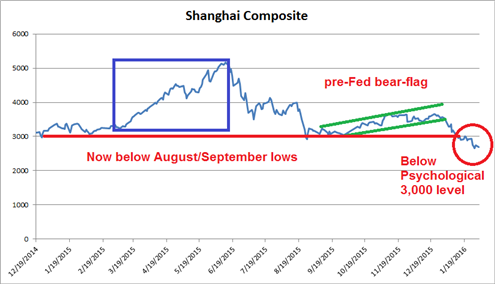 Global Stocks ex-China are relatively stable after Friday’s burst: Friday saw huge jumps in global equity markets outside of China, and the big driver appeared to be Japan’s cut to negative rates. This likely has some pull in the matter, but don’t discredit the fact that it was the last day of a huge month just after a year that many hedge funds under-performed. Meaning, for those that rode trends for 7 or 8% during the month, it could look pretty attractive to close some positions and realize those profits so that the monthly return number locks in some of those gains. This is called ‘window dressing’ and it happens way more often than it should.

But there was a rather large and unexpected announcement, even if it was rather tokenary in form. And I’m referring to the Bank of Japan’s surprise move to negative rates at their most recent policy meeting. The move was a complete surprise to markets, as only a few weeks ago the head of the Bank of Japan told his parliament that he wasn’t even considering negative rates. Further, given the pressure that’s on China and their need for a weaker currency while also facing the fear of capital flows running out of the country (somewhat of a currency conundrum), it made sense for the Bank of Japan to exercise some caution so that they could act in the future. This was at least the expectation, with perhaps a small chance that we might see an increase to the bank’s QE program.

An increase to QE is largely supportive for stocks because that pushes fresh capital into an economy, but negative rates are a little more debate-able. Theoretically, it should push capital from Central Bank ledgers into an economy (since those deposits at the Central Bank will now be paying interest as opposed to earning it), but there is a risk here as well.

What if there is no other place that investors want to employ that capital? That means cash-in-hand seems like a pretty good idea, right: Because if a bank is going to charge you to hold your cash, why not just withdraw your cash, hold it yourself and save some money? This can potentially lead to capital lock-up, and this fear is one of the reasons that negative rates have never really come into the equation of the global economy until recently.

Negative rates were first used by Denmark and then launched by the ECB a year and a half ago, with a further negative cut in December. At the BoJ’s policy meeting last Thursday night, Mr. Kuroda mentioned Europe’s successful usage of negative rates along with QE, and it would likely be way to early to say that Europe has successfully turned the corner.

The big issue with this move is China, as that economy is already struggling mightily, and the capital flight that could be triggered from a negative-rate policy (NIRP) could add much unneeded pressure at a very tough time. The very act of the Yen getting weaker means that the Yuan gets stronger given the robust trade flows between the economy. This means that Chinese imports into Japan cost more, and will likely sell less. This also means that Japanese imports into China cost less, thereby further hitting Chinese producers as both international and domestic consumption take hits from a weaker Yen.

But it was likely that the Bank of Japan saw this and still moved anyways. Mr. Kuroda said that he would go more negative if he had to, and that could be seen as a threatening statement to Yen-longs. The bigger question is, why now?

It seems that Mr. Kuroda and the Bank of Japan may have been attempting to position themselves just in case there was a safe-haven run into the Yen. After three years of QE have been unable to turn the tide of deflationary forces and after the Bank of Japan has essentially been lodged into a long-Nikkei/Global Stocks position, it would make sense for them to begin instituting a strategy of defense. The only question is how offensive that strategy might be to the Chinese economy, and we’ll have to watch the data over the next couple of months to get an idea for how strong this impact might be.