- Global equities caught a strong bid last night, with the Nikkei moving up by a whopping 5.88% as ECB QE-hopes propelled risk assets off of lows. Expectations are building for the Bank of Japan to increase their QE-package. But will they, or can they? We find out next week.

- Many global equity markets are putting in long-legged Doji formations for the week, and that will often happen ahead of a swing. This doesn’t negate the bearish trends, but it does give reason for caution if pressing the short trade. Stocks have already put in a huge move lower on the month.

- The ultimate question is whether the Fed will back down, as that appears to be the push point that really started the recent bout of chaos. This might not be as simple as it looks, as the Fed has to consider broad-market impacts of continued low-rate policy (impact to investors/pension funds).

We may have just gotten a preview of what’s in store for this year: In yesterday’s piece, we discussed how Mario Draghi’s hints towards an increase in QE from the ECB may be around-the-corner at the March meeting. This had brought strength to stocks and reversals to many of the major risk-off trends that have dominated markets thus far in 2016, with the big question being: How long will this last? At the time we published yesterday, it looked as though sellers had already begun jumping back in to fade the move in stocks, and there was strong action on both sides of the spread in SPX throughout the US session yesterday, producing a Doji on the Daily chart.

But as Asia opened strength in risk-on really took off and this has continued through the European session as the S&P currently finds itself nearing that very familiar 1,900 level, with a very interesting level of resistance just 5 handles above.

The big question here, and related to the question we asked yesterday pertaining to the lifespan of this rally, is how much of this is short covering and how much is legitimate dip-buying? Buying stocks after a ~10% haircut is risky to say the least, so we’ll likely see this theme play out over the coming weeks.

The preview that we got today was something that we’re probably going to be seeing more of throughout the year, and this is something that we’ve been talking about in these market talks for some time now: And that is the expectation for action or verbiage from Central Banks in the effort of offsetting this current batch of economic pain. And the ECB is a big deal, the Bank of Japan is a big deal (which we discuss below), but the big one that could really change matters is the Fed, as their hawkishness appears to be what’s driven this whole theme of weakness after the December rate hike carried with it the expectation for four full rate hikes going into 2016.

For now, we’re seeing expectations for more easing out of Europe filtering into markets, and this can be vividly seen in most Euro-crosses. But this isn’t a surprise; we told you this was coming. After that December disappointment, I wrote that the ECB may just have been warming up for something bigger (than a deposit rate cut) in the early portion of next year. This was somewhat obvious, although the timing was opaque. But the ECB has a history of disappointing only to deliver at a later meeting. It happened when they launched QE during the March, June and July ECB meetings in 2014, and it’s happening again as we near this March meeting.

The facts: Europe is in a really vulnerable position, and this isn’t just an economic problem; it’s become a political and even a sociological issue in Southern Europe after years of 25%+ unemployment. We haven’t likely seen the end of ECB action, whether that’s in March or later in the summer. They’re probably going to come to the table with something, and already we can see traders factoring that into price action in EUR/USD.

The S&P has Doji’d up on the week (so far, that can change with price action today) – and that is threatening to shorts: With the brisk reversal being seen on Thursday, we’ve had much of the move lower this week erased, and the weekly chart is currently showing a long-legged Doji. The Doji, of course, is the most basic indecision formation and will often prelude big moves or turns in a market.

Last year the S&P put in an annual Doji. That was the impetus behind our article; The S&P is Flat for the Year and that Usually Leads to Big Moves. In that article, we discussed how there were seven instances over the past 35 years in which the S&P put in a doji-like performance on an annual basis (defined by movement of less than +/- 6%. The average move in years following was 24.63%, with an average return of 14.19%. There was but one year in which stock prices moved down after a doji-like annual performance, and that was in 2008 as the S&P moved lower by -36.55%.

This same type of thing can happen on shorter time-frames as well: This is the prospect of multiple time frame analysis. On the chart below, we’re looking at the weekly S&P setup, and notice how a new low was set earlier in the week, only to see all of those losses erased in a quick fashion after this allusion to further easing from the ECB. If we get more Central Bank pledges next week (read below), and we can see continued bullishness. So this is the time for shorts to be cautious; this market is still very much bearish, but is also heavily short. That means that as prices rise, pressure mounts on already-held position, and this could lead to even more buying as shorts cover up their positions for fear of being on the wrong side of a Central Bank action.

This doesn’t make the market bullish. Price action still shows bearishness, and this bout of bullishness in a bearish market can be an opportunity to sell at a better price. But after a Doji, traders have to take note. A reversal may be in store, and caution is required. Even if there is a prospect of a massive move, risk management should remain a priority. 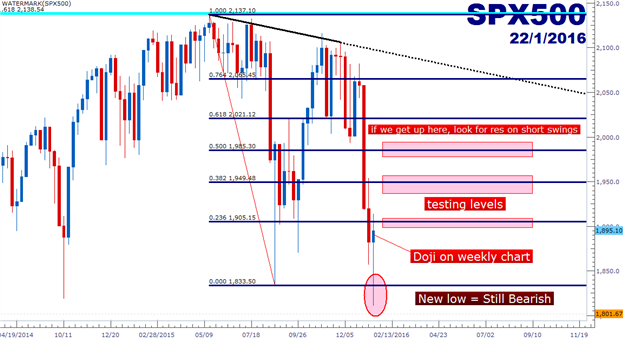 The next big Central Bank on the radar steps up to the plate next week: The Bank of Japan has some very big problems to contend with. Not only are they still forced to battle the deflationary forces that have contracted and contorted their economy for the better part of 28 years, but they’re also extremely exposed to China and the Yuan. As the slowdown in China heats up, it’s largely expected that regulators will weaken the Yuan. For an export economy, it only makes logical sense to try to guide the currency lower during economic hardships or else, you run the risk of really exacerbating the situation by putting pressure on your exports. So this has become somewhat of a foregone conclusion that the Yuan is going to work its way lower. It’s not going to be without fraught though!

Chinese regulators showed us as much last week when they yanked the offshore Yuan overnight rate up to a whopping 66.82%. This meant huge rollover costs for carrying short Yuan positions and, as you can imagine, traders responded so this brought a ton of volatility into the price action behind the trade and, for all intents and purposes, made the idea of sitting in a short Yuan position a pretty daunting prospect, even if further weakness was very logical and likely.

But this means something far different for an already vulnerable Japanese economy. Japan kicked off QE with a ton of hope in 2012 after Shinzo Abe stormed back into office (this is actually his second run as PM after resigning under ‘interesting’ circumstances previously). Mr. Abe brought with him a strategy for turning around the Japanese economy. That plan has largely been a failure, at least so far, as Japan hasn’t come anywhere close to a 2% inflation target (and not to castigate them too badly, but no developed economy has been able to hit this number). The one thing that did work was weakening the Yen. This removed pressure from exporters and actually brought a small dose of vitality to the economy, if only very briefly. But the forces of nature (and mathematics) are strong, to be sure, and Japan’s QE hasn’t really shown any actual results yet, over three years after it came into play.

So the logical next step would be to assume, as with the ECB, that more easing would be coming, right? Well Japan doesn’t have that luxury because three years of QE have left the economy with very few bonds to buy; as they’re already monetizing every bond that they print. It’s gotten to the point where QE purchases have been directed to stocks, and historically this has been a very bad idea because it exposes the entire economy to the risks and swings of equity markets. And perhaps more to the point, this whole process started after years of QE-driven gains in equities, so technically, Japan has bought-in at or very near highs in many equity markets.

We saw the nasty underside of this in August and September of last year, when China really started to face pressure. The Government Pension and Investment Fund reported a loss of a whopping $64 Billion. To put this in scope, that’s about 5.6% of the fund’s assets, all contracted in two months of stock volatility.

Let’s just put it like this – if investing pension funds in stock markets was such a great idea, the whole problem of Social Security in the United States could be solved immediately. But it’s not a great idea because stock markets are volatile. Stock markets crash. This is why bonds are so utterly important to this world, because people can actually expect to be paid back their principal. And the closer one is to retirement, the less they can afford to take on volatile risk of swinging stock markets, and the greater the need for this type of consistent, dependable return is. This is supposed to be the focus of stability for pension funds in order to avoid the risk of having to go back to a retiree that’s paid into a fund for their entire life to say ‘hey, sorry, I know you were expecting a check this month but the Nikkei is down on the quarter, so you’re going to have to eat ramen noodles and forego paying your rent.’

And this all goes right back to why the Fed wants, or maybe even needs to raise rates. Ms. Yellen was clear about this in December when she said she felt there was a higher probability of a recession if the Fed did not hike. She faced the music and hiked rates when much of the world said it was a bad idea.

For now – watch the Bank of Japan next week to see if they increase their QE package. We’re already seeing Nikkei strength and Yen weakness one week ahead of the BoJ meeting.