- It appeared like yesterday might finally bring a respite to the brutal selling that’s engulfed equity markets in the calendar year of 2016: That did not come to pass. Sellers took advantage of those higher prices to get a better entry.

- Price action is displaying a far different tonality than what we’ve become used to over six years of ZIRP-fueled gains. Buy the Dip used to reign supreme, now the methodology is ‘sell the rips.’

- This is a problem not relegated to just the United States. China is in the news, but Germany (and the rest of Europe) are taking some huge hits. Increasing political risk in Europe carries the risk of political instability throughout the continent.

When we wrote yesterday, the S&P had just ripped up to resistance. It looked like we might finally get a respite in the brutal selling that’s defined markets so far in 2016. That didn’t last. The level of resistance that we pointed yesterday was the 38.2% and 23.6% Fibonacci retracements of the S&P’s most recent major move. This most recent major move was driven by China’s Black Monday on August 24thand has provided a series of levels that’s seen consistent price action over the past four-and-a-half months (shown below). If you want to get the full trade setup, check out my recent Technical piece on the SPX 500. The updated and more current chart is below, with yesterday’s resistance check off of the 38.2% Fibonacci level included.

When even the meekest of rallies elicits new sellers, that’s when we may be at a potential pivot in markets. For six years one of the most reliable strategies across markets was ‘buy the dip.’ Simply wait for stock prices to fall, wait for support and then buy. With the Fed supporting markets, it was usually just a matter of time before stocks moved higher. This is what QE and ZIRP does – it contorts the investment environment. So rather than taking balanced and reasonable investment allocations, investors were essentially prodded into investing in stocks by abysmal yields and, at least what appeared to be constantly rising prices.

This is why the December rate cut was so much more than just 25 basis points. It was a clear change in the way that the Fed was going to approach the global economy moving forward (whether they like it or not, their decisions have international repercussions). No longer were they looking to support those individual investors, at least not in the same manner that they were before with a constant onslaught of liquidity being injected into corporate America.

This distorted investment environment still exists today. Even when including this most recent bout of weakness, which has seen the S&P shed -11.2% from the highs set in May of last year, or -7.8% thus far on the new year; the S&P 500 is 184% higher than it was at the lows of the financial collapse. That means that stocks are 2.84 times more valuable today than they were at the lows of the financial collapse. Over the same period of time, US GDP grew about 12%. So, the real economy grew 12%, and stock values grew by 184%, and this would indicate some element of divergence. But this was all driven by easy money policy from the Fed, right?

Put yourself in the shoes of an investor retiring in the next 10 years. In most normal environments, this person is going to take an increasingly conservative portfolio as they near retirement: More bonds, less stocks and far less risk. But what is this investor supposed to do with ZIRP? Bond yields are really low (by design), so investing in bonds isn’t all that attractive in the first place. But perhaps more troubling is the fact that when rates rise, bond prices go down, so if this investor were to have purchased 20 or 30-year bonds while rates were really low, they’d essentially be forced to take a loss on principal as rates inevitably moved higher.

So rather than do what near-retirees should do, many of these folks were prodded into investing in the stock market or taking on other risky investments rather than taking on the bonds that would normally define the conservative investor’s portfolio. This meant more strength to stocks, more buyers and higher-highs. After all, if stocks have been going up for three or four years, the stock market doesn’t look as risky as it does when we’re seeing back-breaking 20% moves or more. And with bond yields abysmally low, well the portfolio practically builds itself.

The problem is that asset prices just kept going up. Progress in the ‘real’ economy, if we want to call it that, has been lackluster to the point where the Fed took six years to finally get off of flat rates, and even then – the decision was not without fraught. We outlined many of those risks before they did it. Chinese stocks were trending higher at the time, albeit in a bear-flag formation. That bear flag has since been soundly broken: 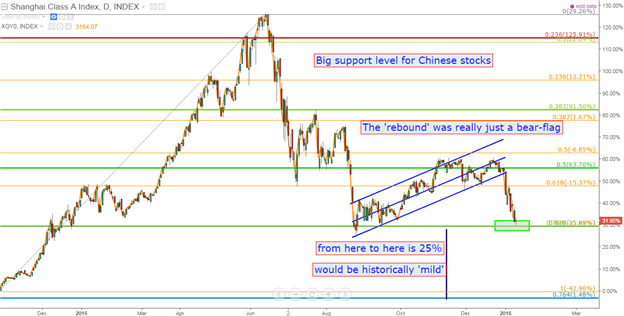 The Fed knew these risks too, and they still hiked. This tells us something, and Ms. Yellen alluded to as much in December when she mentioned that she had a bigger fear of a recession if the Fed didn’t raise rates. Deductively – that is the Federal Reserve saying that they are concerned about asset prices without using the ‘b’ word. Nobody wants to hear Ms. Yellen say there is a ‘bubble’ anywhere – that would lead to near-instant panic. Instead they hiked rates, and actions always speak louder than words – especially from a Central Banker.

And perhaps more telling – even with all of this recent increase in pressure, the general commentary from Fed members has been that higher rates are still on the way. The Fed says four hikes are coming in 2016, and they seem to be sticking to that narrative. The market is expecting two hikes. This divergence can be very uncomfortable for the world this year as an Asian slowdown and a Commodity Meltdown introduce a whole new slew of risks. These are threatening themes, to be sure, but higher rates are likely the blow that is breaking the bow. We had drooping commodity prices and an Asian slowdown last year too, but stocks held their own. The differentiator here is tighter monetary policy.

The big question is how far markets have to fall for the Fed to relent? For now, that probability is not in sight. So investors are still selling because they’re loaded up on risk after six years of easy money. But they didn’t just inflate asset prices in the United States, did they? This was a global phenomenon.

And while much of the world grapples with deflationary pressure and recessionary headwinds, this tighter monetary policy out of the United States comes at a very inopportune time for the global economy. It’s easy to see this in US stocks because that’s what is, or at least should be, most directly impacted. But it’s not. The rest of the world is vulnerable right now. So while the S&P is off 11.2% from the highs set last year, Germany is getting hit far harder with a greater than -20% decline since those 2015 highs. We just ran into a major trend-line on the DAX that’s defined the trend since 2011; the same trend-line that offered such strong support back in September when weakness was really starting to pick up. 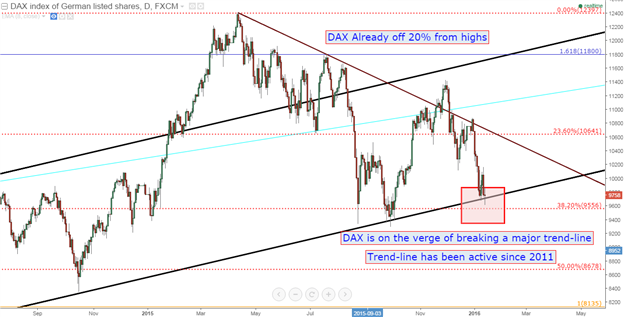