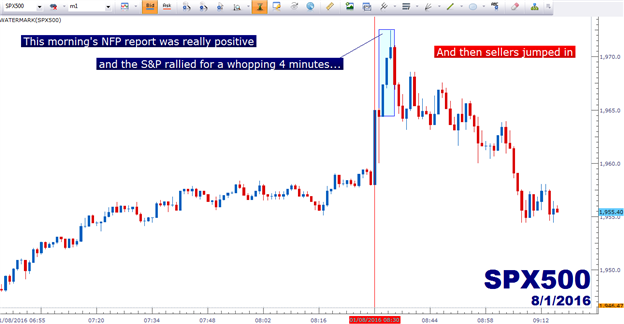 -This morning’s NFP report offered a strong beat of expectations with a print of +292k v/s an expectation of 200k. We also saw revisions higher for October (+307k) and November (+252k).

- All in all, this was a fairly positive report. Wage growth was weak, but that’s become normal. Unemployment remained flat at 5%.

- This strong report provided a quick blip of strength to stocks, only for weakness to come right back. It appears that sellers used this good news to get short at a better price; a key marker of a down-trending market, when even good news gets sold as investors duck-for-cover.

- If you’re looking for an additional component for your strategy, Sentiment can be a great addition. If you’d like to see real-time sentiment, check out our SSI feature on our updated DailyFX site.

There’s an old trader saying that goes like this: In a downtrend, good news gets shrugged off and bad news becomes the center of attention. In an up-trend, good news becomes the focus and bad news goes by the way side. This is why the phrase ‘it’s different this time,’ screams of naiveté: Because it’s never different, and the longer that a trader spends time around markets, the more that they learn this fact. Sure, the details may be a little different, but for all intents and purposes we’re just on re-peat of the same old album. Cycles happen, and the news stories that define those cycles are often subjectively interpreted based upon the surrounding context of the situation.

But on to more timely matters: Non Farm Payrolls printed a blowout number this morning with a print of +292k jobs added to American payrolls when markets were looking for 200k. So this was a really strong beat, and that wasn’t all – we also saw revisions higher for both October and November, with October being nudged up to +307k and November to +252k.

So this was a really, really positive report on the headline numbers. And markets initially ran higher to reflect this really bullish print, but that was a fleeting theme as the move was getting faded (reversed) out of the market really quickly. This shows the possibility that this positive report was merely an opportunity for shorts to open up at a better price. This speaks to the theme we were mentioning earlier – in down-trending markets, good news gets shrugged off, and that is what appears to be happening here.

On the below chart, we’re looking at the S&P – and I’ve drawn a red vertical line right at 8:30 AM as NFP was released. As you can see, prices rallied for an additional four minutes before tilting lower. A clear example of shorts jumping in after this quick pop to position-in at a more favorable price. This is perhaps even more bearish than had we seen a negative print this morning, because if really positive data can’t bring markets higher, well, there is probably something else going on.

China put in a big rally overnight after removing circuit breakers: In yesterday’s piece, we discussed how dangerous Chinese circuit breakers had become, and where they were essentially being used as a sell signal that was increasing panic in Chinese equities.

Shortly after that piece was published, China repealed the circuit breakers; allowing stocks to move freely without the encumbrance of a potential halt after ‘really big moves.’ And many took this as a sign that Chinese stocks would crater as many financial media outlets were reporting quotes from hedge fund managers (with very small AUM numbers, at least from what I saw) that said they would essentially sell everything that isn’t nailed down.

But let’s think about this: Chinese regulators are not stupid. Sure, they’re learning how to transition to a more market-based type of economy and they might be seeing some growing pains (and there are some legitimately big problems that they will have to contend with down the road), but the last thing that anyone wants is a complete collapse of stocks. It was extremely unlikely that that circuit breaker would be repealed without something else being used to by Chinese regulators to stem the declines. What exactly, I’m not sure – but I am fairly certain that Chinese leadership wouldn’t take such a haphazard approach to monetary management.

And sure enough, when stocks went up last night, accusations of state-sponsored buying ran rampant. I had warned of this yesterday over twitter as this news of circuit breakers being removed was making its way into markets.

The Shanghai Composite was up by 1.97% in a really brisk session, and the Shenzhen Composite was up by 1.05% after a quick dip after the open. So we definitely saw some of that unloading by hedge funds shortly after the open of trading, but for all intents and purposes last night was a really, really strong trading session in China. And this ‘lack of pain’ led to strength in many global markets, at least initially, as we saw Japan and the Nikkei move higher after a painful two days of selling.

Most attractive theme/play in the world right now, Buy the Yen: We touched on this topic yesterday’s piece in telling traders to focus their Asian-slowdown plays towards Japan, and I wanted to expand on that today since some really great questions came in over twitter on this topic, and that is one of context. Because as we’ve been discussing in this article so far, all is not necessarily what it appears in markets. Context, deduction – these types of things matter massively, perhaps even more so than the actual news that drives these themes.

But even if you lay out the best short position in the world – if the market that you’re trading is halted, or closed, or if selling is restricted – well, you were right but you’re still not going to profit off of it, at least not as much as you would had you made that play in a more amenable market. Chinese stocks are like this right now: Sure, there are a lot of reasons for Chinese equities to continue going down, but how comfortable are you with Chinese equity trading rules? How sure are you that they won’t change on a moment’s notice. And even if you do hit ‘the big short’ on China – are you sure that you’ll be able to close the trade, take cash out of the account, and actually profit from the move?

Maybe you can, I don’t know. But because I don’t know, I’m just going to focus those efforts in a market that I’m fairly confident will display a consistent set of rules and processes that will allow me to actually manage my position.

So, on this topic – currencies can be a far favored way of playing this theme. The currency world offers quite a bit of flexibility to traders, and its never closed. So if Asia melts down or if Europe hits the skids – I can manage any of these positions without regards to superfluous exchange rules.

And I’ve been talking about Japan as the primary way to play this upcoming dose of weakness headed for the global economy, so today I’m going to show you how this play can be made in the Yen. As I discussed in the article, Top 3 Themes as We Approach 2016, Part 1: Asian Slowdown, this type of approach can be afforded the extra flexibility of being able to get long the Yen against whatever economy one might want.

On the below chart, we’re looking at USD/JPY, and you can see how the positive news from last night essentially just brought prices right back to resistance (prior support), and sellers have used this to peg-in to the short USD/JPY trade at a better price.

But as we mentioned, the primary point of attractiveness of this approach is the flexibility that can be afforded, and the better a trader is the more valuable that flexibility becomes. On the below chart, we’re looking at what could be an accelerated play on the Asian-slowdown theme in AUD/JPY. This is based on the expectation that, should markets continue facing pressure, the Australian Dollar will likely fall further than the US Dollar. Of course, this can change at a moment’s notice, but as of right now – the fundamentals and technical both allude to as such. The chart below illustrates: