The World is On Edge, and Japan is Looking Very Vulnerable

- Markets displayed aggressively risk-averse price action last night on the news that North Korea successfully detonated a hydrogen bomb. But it may not have been an actual ‘hydrogen’ bomb, and that’s an important distinction for the world right now.

- But even with the knowledge that this may not have been a hydrogen bomb, risk aversion came back into markets on the European open, and is still showing as of right now.

- We’re likely in for heavy volatility, and if you want to trade through this you need to be ready. Poor risk management can be exposed in times like this. Read our Traits of Successful Traders research to get that risk management tightened up.

The detonation of a ‘hydrogen’ bomb in North Korea has many on their toes this morning, and we saw a strong dose of risk aversion last night on news North Korea had successfully detonated a nuclear bomb. But as more news and data came in, it became rather apparent that this wasn’t a hydrogen bomb at all, and rather an atomic bomb. An atomic bomb is still ‘bad,’ but we’ve known that North Korea has had those for a long time, and this certainly wouldn’t be their first ‘test’ of an atomic bomb. This is an important distinction, because it denotes how much potential power, and how much of a threat that Pyongyang might become. An atomic bomb uses nuclear fission in its reaction; a hydrogen bomb uses both nuclear fission and nuclear fusion; a far stronger force than using just fission alone. A Hydrogen bomb uses the explosions of many atomic bombs to reach the temperature necessary to trigger the hydrogen component; and the hydrogen bomb creates far more devastation than an atomic bomb would, pound for pound.

The reason for pointing this out is because this very much set the tone in global markets last night. On the below chart of the Japanese Yen, we can see that risk aversion hitting markets as news of this detonation was making its way to the headlines. This broke risk assets really quickly, and we can see USD/JPY sinking right down to the 23.6% Fibonacci retracement on the below chart at 118.38. But as it became apparent that this was not a hydrogen bomb, and in-turn, not as grave of a threat, we saw risk assets make a comeback towards the latter portion of the Asian session. But this didn’t last: As soon as Europe opened for the day risk aversion just came right back into the market, and USD/JPY went right back down to this Fibonacci support level:

So why did risk aversion come back all of the sudden?

While the initial move of risk aversion last night was likely on the shock factor of the potential for North Korea to have ‘cracked the code’ of nuclear fusion; it became rather obvious that this probably wasn’t the case pretty quickly after the fact. The 5.1 magnitude earthquake that was felt highlights the frightening component of nuclear power; but had this been a hydrogen bomb that earthquake would have likely been far greater. So we knew pretty quickly that this probably wasn’t a hydrogen bomb.

But all is not well in Asia. This is just another reason for investors to be scared, and much of the world is, unfortunately, looking very negative right now. Europe is dealing with a migrant crisis that will likely bring on significant political repercussions (not to mention the multiple economic quagmires engulfing the continent), the Middle East is getting even more dangerous with Saudi Arabia and Kuwait turning away from Iran, Asia has a flurry of different risks (with a new one added to the docket last night) and pretty much every economy around-the-globe is facing some type of economic pressure right now. And this is after six years of ZIRP.

If this is what the world has after a single rate hike from the Fed, how are things going to look after two or three more hikes? 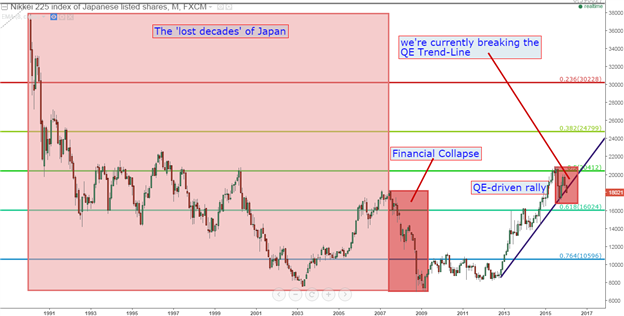 To Trade Slowdown/Weakness – Look to Japan

As we’ve been discussing in these market talks for a few months now, if you want to trade the slowdown theme – look to Japan. Not only is Asia at the center of any potential economic storms that might come about, but Japan is also over extended on QE to the point where they might have trouble adding to or extending their current package.

Think of this like a marathon. You have to pace yourself or else you’ll never make it. If you use all of your energy in the first mile, well good luck getting to the finish line. Instead, you can pace yourself and go slowly and then pick up the speed if need-be as you approach the latter stages of the race when an extra burst of energy will really matter. This extra flexibility allows you more room to work with your strategy. It allows you to be a better runner, and it gives you a far better chance of having a satisfactory performance.

This is kind of like Japan’s QE. They’ve already sprinted off of the starting line, and now they’re limping ahead with a long ways to go. China, Europe, the United States, and many smaller economies still have some energy left in the tank. So even if Japan was leading the race, wouldn’t you want to cast bets towards those who have a better chance of making it through the marathon?

That’s the forward thinking part of the setup: The historical part of the theme is even more compelling. Japan embarked on QE to offset a 20+ year deflationary spiral that ravaged the Japanese economy. This was far different than American QE that was designed as an ‘extraordinary accommodation’ measure. When American QE was triggered in the wake of the Financial Collapse, the economic environment was certainly ‘extraordinary.’ But for Japan to have triggered QE in 2012, a full four years after the Financial Collapse, in an effort to offset what had been very ‘ordinary’ for the Japanese economy, we can see a clear example of monetary policy being used to offset fiscal deficiencies. QE is not supposed to grow economies – it’s supposed to keep them from melting down.

And that’s basically what we’ve seen in Japan. Stock markets have went up (slightly by historical measures), bond yields have moved lower but we haven’t really seen any growth as of yet. The attempts at fiscal policy reform have, at least up until now, been a failure. And with another consumer tax increase (this is like sales tax in the US, or VAT in Europe) set to come online next year, the odds of Japan miraculously, all of the sudden turning the corner is looking increasingly less likely.

We can see this playing out in the Nikkei right now. While most global stock markets are facing some element of pressure, Japan is putting in one of the more bearish looking formations right now. 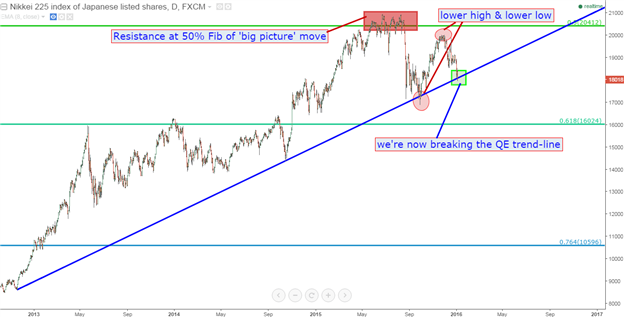 What can cause all this that is happening right now that most people don’t notice?

The Yuan drove to a five-year low last night as news of this detonation hit markets and created risk aversion. But this is likely something that will continue as pressure in China continues to increase. Going back to our marathon example above, China is probably the pick that you’d want to get behind. Not only do they have a lot of energy left in the tank, but they’re young and have a billion people with a lot of room left to growth. So to go back to our analogy, this would be like a runner in the midst of their prime with a top-notch trainer AND plenty left in the tank. Japan’s the older runner having trouble with arthritis after sprinting off of the finish line. Commendable effort and a valiant performance, but the odds are just not in their favor.

As pressure in China increases, Chinese regulators have a ton of flexibility in what they can or might do. Weakening the Yuan is one of the more likely of those prospects. Many don’t realize the danger that this can bring because currencies are still very misunderstood in the global financial community. But as pressure increases, China will weaken the Yuan, and this will provide a much needed buffer to their exports. The very act of the Yuan getting weaker can be seen as stimulatory for export activities, and this additional trade flow coming into China to take advantage of lower prices (since the Yuan is weaker) could help them turn the corner.

But as the Yuan is driven weaker to prod China’s exports higher while also encouraging domestic consumption, this means fewer exports from Japan, Korea, etc. And these are places that are already very vulnerable, this additional hit to exports could be irrecoverable.

So if you want to look for a catalyst for a ‘bigger picture’ move, watch the Yuan spot rate. The weaker that gets, the more pressure moves on to Japan and the rest of Asia, and then, in turn, the rest of the world.

On the below chart, we’re looking at the inverse correlation right now between USDCNH and the Nikkei. As the Yuan weakens, so do Japanese stocks. 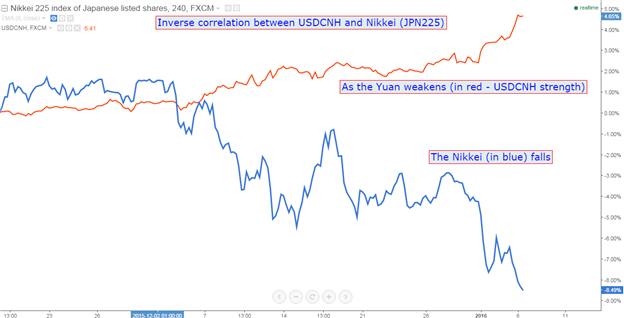