- It didn’t take long for these risks to come to roost; as another abysmal PMI report out of China sent equity markets spiraling lower. China’s markets were halted to the close after a -7% hit.

- This weakness has already spread into Europe and is already showing in the US. It looks like 2016 will be a big year.

Well, that elevated quickly: The first trading day in the New Year has seen stocks around the world get crushed, led in part by Chinese markets after yet another weak PMI report. Official PMI came in at 49.7, just above last month’s 49.6 print; with Caixin PMI falling further with a 48.2 print for last month, down from the previous month’s 48.6 read. As we’ve discussed in the past, these production numbers are vitally important for the Chinese economy, especially right now as they face pressure on multiple fronts while they attempt to convert into a more consumer-oriented, services-driven type of economy.

After these disappointing PMI prints, Chinese stocks got pulverized to the tune of 7%, which triggered circuit breakers for Chinese equities that closed down trading for the rest of the day. But this wasn’t the end of the carnage – as equity markets around the world followed this lurch lower in China and we’ve seen risk aversion picking up ever since . An Asia slowdown was what we identified as the top risk for 2016, so this isn’t out of the blue; but for something so aggressive to happen so quickly after the New Year is surely surprising, especially with the sanguine feeling that stocks exhibited to close out 2015.

The issues here are all fairly well known: Chinese industry is slowing massively; the big question is how aggressively. As China slows down, this creates a ripple effect throughout Asia, because the major market center of China is buying fewer imported goods from Japan, Korea, etc., and this can be a large portion of a company’s or an economy’s sales.

But perhaps even more troubling for the rest of Asia is China’s likely response to further weakness. It’s strongly assumed that China will attempt to offset this pressure by weakening the Yuan; and this is what can really spell trouble for the rest of Asia, in particular Japan, as a weaker Yuan would accelerate both of the above downside risks while also a) making Chinese goods in foreign economies even cheaper, thereby hitting domestic activity in Japan, Korea, etc and b) making goods imported to China even more expensive, thereby dampening Chinese demand for these products.

And while all of this may sound scary, the really frightening part is what happens if all of this weakness and slowdown hits Europe, which is already hobbling along in a very precarious state, looking to be on the verge of some very large socio-political issues/events.

So further Yuan weakness will likely contain some of the downside for China, but it will also like spread and accelerate contagion-like fears of slowdown throughout Asia, and into Europe. This is one of the reasons the European stocks have gotten hit so incredibly hard after this -7% contraction in Chinese equity prices; there aren’t many realities that see Asia slow/meltdown without Europe going along with them.

This doesn’t sound like an environment that should spell all-time highs for stock prices, does it? Well, it has. This is somewhat of an extension of what the past six years of ZIRP and QE have been all about: Bad news is good and good news is bad, because Central Bankers weren’t about to let these rip-roaring trends fall without ‘extraordinary accommodation.’

Well, that is what is different this time. The Fed has already hiked rates, and they’re expecting to kick rates up four times this year while the market is only looking for two. So if you thought last year brought a ton of gyration between Central Bankers and markets, put on your hard hat and strap in for the ride: 2016 is going to bring considerable tumult on that front.

As we’ve been discussing in these market talks, for those who want to trade on the Asia/China slowdown theme, the more attractive market is likely in Japan, and this is for a few reasons. 1) It isn’t easy to gain Chinese exposure and 2) China is a long-term growth story. This is likely a bump in the road, although it may be a pretty big bump that we have to get over. But Japan, in pretty much any way you look at it, is far more vulnerable. And unlike China, Japan does not have a billion people in its population to help it recover. But perhaps further to this point – Japan has been throttling up the QE for over three years now with very little signs that it’s ‘working.’ And after last quarter’s -5.5% drawdown ($64 Billion) for the Government Pension and Investment Fund, they may find difficulty in offsetting any upcoming weakness with additional QE. At the very least, they’ll find it more difficult than China who has far more tools at their disposal at this point (multiple interest rate cuts are expected out of China), and that furthers the case that Japan is the optimal way to play a larger Asian slowdown.

To Trade as Asian Slowdown – Look to Japan:

Speaking of vulnerable:Emerging markets are in a troubling spot. In many cases, EM’s can trade like a high-beta version of a developed economy (so you can think of this like the small cap v/s large cap relationship on steroids). If the global economy is growing, sure that might be great for US or European Markets, but it will likely be even better for a smaller Emerging market that a) has more room to grow and b) will benefit from increased trade coming from those more developed markets.

But when markets are moving lower, this accelerated relationship can work in the other direction, as risk aversion causes investors to move towards more developed economies and safer investments and away from more speculative choices.

There is also an underbelly of this theme: As markets begin to correct and as commodities sell-off on the back of lessened demand, this further punches these Emerging Market economies that are often heavily commodity-based (commodity extraction is a key way for an economy to begin growing, similar to China’s use of industrial production).

The problem that most emerging economies have now is that both of these forces are working against them, and it’s difficult to imagine how these economies can navigate throughout 2016 unfettered by the repercussions of these themes.

Investors haven’t waited to sell-off Emerging Market assets, and we can see that in the below chart of the ETF for ‘EEM,’ representing Emerging Markets overlayed with the S&P 500 (in red). Notice how when both are growing, the blue line grows faster than the red; and this highlights that accelerated relationship that we were discussing a moment ago. But as soon as both start to move lower, look out below. Notice what happened in Q4 of last year for the first time on the below overlay: EEM moved below the S&P 500, indicating that the return on EEM in 11+ years observed on the below chart is less than that in the S&P.

If Markets Continue to Correct, Pressure will be on Emerging Markets 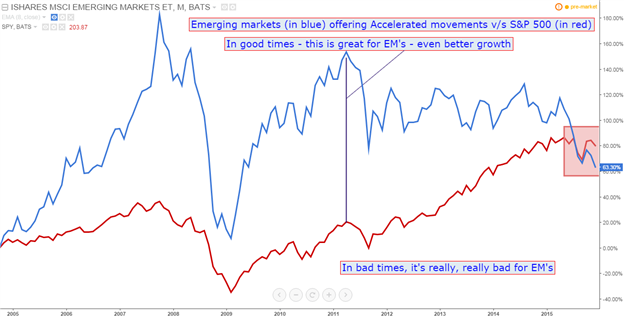 The most attractive venues for this theme may be short Mexican Pesos and South African Rand. After equity markets came back after the summer sell-offs, these emerging market currencies continued to face pressure. Notice in the below chart how the Peso never really broke the down-trend against the Dollar (up-trend in USD/MXN since Peso is in the denominator of the quote):

Down to Brass Tacks – What is Really Causing the Pain: During market panics or sell-offs it can be really easy to fall into the general narrative, which right now is very much China-driven. But as we’ve been discussing in these market talks over the past four-five months, this would probably be a brashly over-generalized (and incorrect) prognostication. China slowing down is not news, this is well-known. And further to that point, American exposure to China is limited, at least when compared to Japan or Europe, so even if this were China-driven it’d be unlikely that significant weakness would develop in the USA should this be a ‘just China’ type of thing.

But this isn’t just China. This is a credit bubble that’s been building after six years of ZIRP and easy money have provided a false sense-of-security the world-around. This credit bubble has built in all areas of the market as investors were prodded into absorbing more risk than they normally would as ZIRP a) drove yields incredibly low to the point where investors had to look at higher yielding (riskier) investments and b) provided wind to the sails of global growth.

Well, that is all over now. The Fed has raised rates, and they want to continue raising rates briskly in order to move the American economy off of ‘emergency-like’ accommodation. The down-side of that removal of ‘emergency-like’ policies is that investors now need to take a more honest look at their investment profiles because the Fed is no longer supporting markets with extraordinary accommodation. Another down-side is that those riskier investments, whether it be stocks of companies in Emerging Markets or High Yield (Junk) bonds, are now considerably more unattractive because a) prices have been driven artificially high and b) they’re utterly unattractive in a global-slowdown type of market.

Again, this is something that we know and something that’s already taking place beneath the surface. Stocks and high-yield bonds will generally display a type of direct correlation because they share very similar prospects. In a strong, growing market, corporate performance should improve all factors held equal. This means stronger earnings (and stronger stock prices) and a higher probability that bond holders will be paid off on debt investments (which helps speculative junk bonds). And when risk aversion is hitting in an economy, the same direct correlation will generally hold as stocks sell-off while high yield bonds see a lower probability of pay-off.

When Chinese markets were collapsing in August, this is precisely what we saw: Both high-yield bonds and stocks getting sold off. But as markets began to recover in Mid-October, driven in part by the Fed’s mention of the possibility of ‘looser for longer,’ stocks recovered but junk bonds did not. The two markets diverged greatly, and as we asked in November as these trends had begun to de-couple, the big question is which move was ‘right.’ Were stock investors leading the way as higher rates out of the United States spelling even greater gains moving forward? Or where bond investors (who are often considered to be the ‘smart money’) leading the way after some very real risks came to light in the final two quarters of last year?

If you read these regularly, you probably know which side I’m on, but this isn’t’ just me. DailyFX issued our Top Trading Ideas for 2016, and you’ll notice a singular theme throughout. My top idea for next year has already started off well in looking for this to finally be the year that stocks fall.