Is the World Ready for a Rate Hike From the Fed?

- The Federal Reserve meeting on Wednesday will dominate the economic calendar for this week.

- Continued sell-offs in high-yield bonds and commodities indicate that all may not be well in the global economy, and a rate hike from the Fed may make this situation worse.

- After the FOMC held rates in September, global markets sold off. So if they hold in December, we may see an even more vicious sell-off as fear permeates the global economy. The Fed is between a rock and a hard place here. Expect heavy volatility regardless of the outcome.

This was an interesting summer for markets. A perfect storm of risk was converging on global equities, as a commodity sell-off combined with a meltdown in Asia while the Federal Reserve was looking to raise rates all seemed to nudge investors into more risk-averse portfolios. It started with selling out of China in June and July, as the massive run in the stock market that saw Chinese equities move up by more than 150% in less than a year came to a screeching halt. At first, this seemed to be isolated to China, and after such a massive run in prices over the previous year, at least initially, this selling looked like a garden-variety pull back.

But by August, this selling had moved into other economies in Asia and we started to see the Nikkei get hit. A weakened European economy was next, as European stocks started selling off on the fear of a ‘hard landing’ for the Chinese economy. After all, if your economy is already deflating and facing signs of slowdown, a recession in the economy of a key trade partner is likely not going to bring much positive benefit.

Next up was the United States as US equities got tagged in third week of August and began running lower in a frightening fashion. This all converged on August 24th as we saw risk-off capitulation across markets around-the-world. This is now called ‘China’s Black Monday,’ and this led to a global market sell-off as the combined worries over commodity prices, China’s slowdown, and uncertainty around the Fed were enough to create selling pressure in risk assets that have largely been supported over the past six years.

As global markets hastened their sell-off, we saw something very familiar happen: Central Banks getting active. China increased their already outsized stimulus efforts to arrest these declines, and the end of August saw numerous actions in an attempt to counter the selling. Initially, the selling wasn’t able to be countered, but eventually we saw what has become normal over the past six years of Zero-Interest Rate policy (ZIRP) as stock prices started to rise again.

When we got to September for that long-awaited Fed decision, the bank backed off of a rate hike in order to ‘monitor international developments.’ The initial response was brutal, as that risk-off move from two weeks prior came back into global equity markets. This is the opposite of what we had become accustomed to, in which ‘looser for longer’ spelled stronger asset prices, and this makes sense. Higher rates make it more difficult for companies to operate (considering they have to pay more to borrow funds); so the fact that stocks sold off AFTER the Fed held shows that something else was going on; perhaps something far more troubling: The Federal Reserve may be losing confidence from global markets.

After that September Fed decision, risk-off came back into markets for two weeks as brutal selling accented most equity markets around the world. Not only did we still have the collapse in commodity prices along with the fear of a meltdown in Asia, but now markets were uncertain around what the largest Central Bank in the world wanted to do with rate policy. So markets hastened their declines for two weeks, but that didn’t stop Central Banks from singing a very familiar song that asset prices would remain supported. After two weeks of statements revolving around cans being kicked down the road and ‘looser for longer,’ stock prices started to come back. We saw China continue to kick up the stimulus efforts and, eventually, Chinese stock prices were rallying again as if the summer swoons had never happened. Three weeks into October and Chinese stocks were back to their bullish ways, as if nothing had ever happened.

Around this time, we saw the return of the whole ‘bad is good’ theme, indicating that worsening data would further compel Central Bankers to stick to emergency-like policy to keep markets afloat, and we saw plenty of bad data in the first three weeks of October. Chinese trade data came in showing a -20.4% contraction to imports for September. That’s one-fifth; a huge number. For Chinese trade partners like Japan of the United States, this is extremely troubling. This highlights the veracity of the slowdown in China. A week later we saw the first GDP print below 7% for China since the Financial Collapse in 2009.

But stock prices had largely continued their ascension going into November, and as we outlined last week, Chinese stocks have formed a massive bear-flag formation. A bear-flag is a price action formation that will often populate during a retracement in a down-trend, and since publishing this last Wednesday, we’ve seen prices begin to test support of this bear-flag channel. The chart below illustrates:

But not everything has come back since that major sell-off had seized in September. High Yield bonds not only continued their sell-off, but seemed to hasten it. This is very counter-intuitive, because high-yield bonds will often display a correlation with stock prices. In a strong economy that’s continuing to grow, there should be a higher probability of bond holders being paid off. So, the environment that allows for stronger stock prices usually allows for a higher probability of a bond holder being paid off. This means that bonds carrying higher yields are more attractive than those with lower yields (safer). And in an environment denominated by ZIRP in which yields are already super-low, investors need to take on more risk than usual to get their target returns for the portfolio.

The troubling part about this is that stock prices and high yield debt has become absolutely divorced over the past few months. We discussed this at length in Friday’s article, Look Out Below: The Strains from the Commodity Carnage are Starting to Show. While stock prices have come back like it was 2009 and we were seeing the promises of QE in our future, High Yield bonds and commodities have continued their brutal sell-off that indicates that pain may be in the future of the global economy. The big question is which of these indications is ‘right?’ Are high-yield bonds and commodities forecasting pain in the near-future? Or are we going to see stock prices lead the way?

With the Federal Reserve’s December meeting only a few days away, we’ll likely see big movements out of markets. The S&P 500 is continuing to show what could be signs of a top. Since setting a new all-time high earlier this year in May, the S&P has continued to put in a series of ‘lower-highs.’ This can be a key price action indication that a top may be near. As prices run higher, bulls are more reticent of driving prices up to new highs, and sellers jump in earlier (not willing to wait around for a new high before triggering the short position). This could be the early stages of a top, and with the 61.8% Fibonacci extension of the Financial Collapse move coming in right at 2,138, traders can take a secondary theorem as to why we may have already set that near-term high. 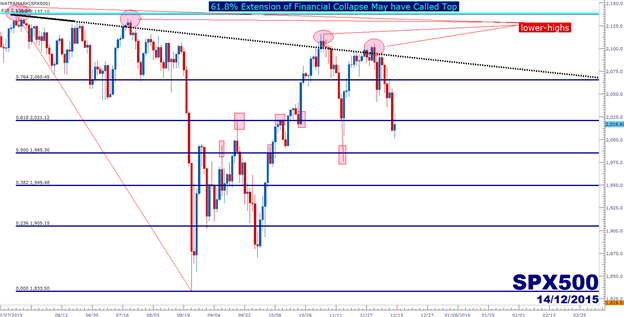