US Dollar and Commodities Setting Up Ahead of the Fed

- Last week saw yet another positive NFP report with a print of +211k jobs added to American payrolls along with an up-side revision for the prior month’s NFP print; from 271k to 298k.

- This furthers the case for a US rate hike, and from here, it looks like December is a certainty. But what happens after December (or what is expected to happen) will likely drive USD-flows moving forward.

- After the massive drop in USD after Thursday’s ECB announcement, traders can look to buy the dip; Gold is looking especially attractive for the long-USD theme.

Last week’s NFP was another strong vote in the camp of a rate hike from the Fed in two weeks, and from here, it looks fairly certain that the Fed is going to adjust rates higher by 25 basis points. Friday’s NFP report printed above expectations at +211k and the revision for October nudged the prior month’s print up to +298k, all while the unemployment rate stayed flat at 5%. So, if you wanted a healthy job market – these numbers indicate such. Perhaps more to the point, the recent trajectory in job gains has been so strong that it has become increasingly difficult for the Fed to back off this time, as has become customary over the past three years.

Perhaps more interestingly, the US Dollar is back to its up-trending ways after the massive dip post- ECB Thursday. The ECB disappointment on Thursday saw considerable volume come out of the short EUR/USD side of the market as bets had essentially lined up looking for the ECB to unleash a bazooka that never came. This led to a strong Euro and a really weak US Dollar that moved lower by nearly ~-1.5%.

But since that NFP print on Friday, the Dollar has been surging higher as we close in on that December FOMC meeting on the 16th. But given that this rate hike is beginning to look like a foregone conclusion, traders need to start looking around the corner to anticipate what may be coming next – and this could be one of the possible reasons that we’ve seen resistance form on the greenback for the month of November; namely – a large portion of this December rate hike may already be priced-in, and continued strength in USD will be driven by the pace of future rate hikes down-the-road. 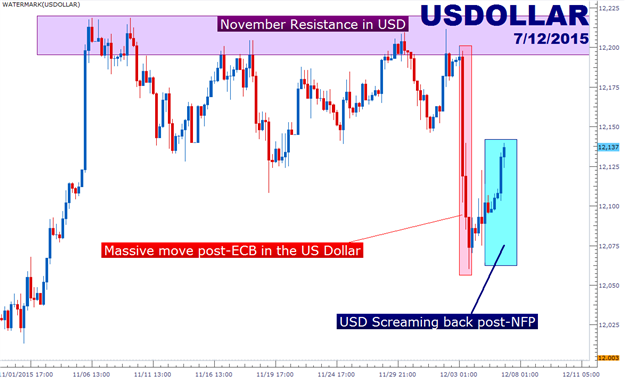 Look for the US Dollar to trade with a direct correlation to US data over the coming month, as better-than-expected US data will likely allude to stronger rate hike pressures for next year. Some estimates expect as many as four hikes next year, and given the pandemonium that’s been delivered to global markets this year whilst waiting on a single hike, that expectation may be a tad outlandish from where we’re at now. Other estimates suggest a ‘gradual’ rise in rates based on continued improvement in data; and while this sounds like the happy-medium that much of the world wants, the Fed isn’t exactly carrying a strong track-record there as we’ve had numerous efforts to stage a ‘data-dependent’ rate hike over the past three years that have not come to fruition. Does anyone remember the 6.5% unemployment rate trigger? Ya, that didn’t work out too well, and likely, we won’t see the Federal Reserve subjugate such an important decision to one simple (and noisy) economic indicator like employment or inflation data.

So, it’s left up to us, markets, to decide whether the economy is strong enough to stage a series of rate hikes out of the United States in 2016. If history is any guide, the Fed is going to want to see stability in asset prices before embarking on any additional hikes, and any pressure that may be seen in global markets, such as China’s Black Monday on August 24th, could delay future hikes. This goes right back to that September decision in which the Fed backed off of hiking rates in order to ‘monitor developments abroad.’ We discussed the ramifications of this decision in the article, Are Global Markets Losing Confidence in the Fed.

One market in particular that may be set up for a USD-play is in Gold. Gold was getting smashed for six weeks as gold prices had fallen from $1,190 all the way down to $1050. As we had written in our most recent Gold Technical Piece, Gold had found support on the bottom of a long-term 2-year trend-channel, and traders should stand clear until a more attractive setup became available. The big level here of $1,087.05 has been significant in Gold of recent: This is the 50% retracement of the ‘big picture move’ in Gold, taking the low in 1999 at $253.30 to the high of 2011 at $1,920. This Fibonacci level had provided a really strong level of support to the July declines in Gold, and this is what sent prices back up to that $1,190 level. But the selling over the past month has been too much for support, and $1,087 eventually gave way to the previous 2015 five-year low of $1,071.28, and then finally tagged the bottom of this trend channel before moving higher on Thursday and Friday of last week.

If you want to buy some Greenbacks, Look at Gold

Oil: The pain chain continues in Oil, and this may have been somewhat lost in the shuffle on Friday. OPEC did not decide to lower production on Friday, and this means that supplies will remain unfettered while prices continue to drop. Within the report, oddly, for the first time in decades OPEC removed any reference to the OPEC output ceiling, indicating that there may be some disagreement amongst Oil Ministers making up the cartel. This led to a huge decline on Friday and even more follow-through this morning as Oil has fallen below the psychological $40/barrel barrier (for WTI – or USOil) that had provided support on the close last week. Brent crude (UKOil) is driving towards a new 7-year low, threatening the support levels that had come in during the Financial Collapse at the 36.20 level.

OPEC statement coupled with the decision said: “Rising oil prices next year will not depend on OPEC reaching immediate agreement or on a return to price control, as we expect prices to increase primarily on the back of continued robust demand growth and a decline in non-OPEC oil production.’

So, basically, OPEC is betting that shale production will drop dramatically, and this can be a huge threat for a US economy that’s seen a revival on the back of energy production. While Oil prices are high (and rates are low), entrepreneurs are incentivized to drill for oil. But as those prices drop, so does that incentive. But, you can’t just call your bank a year after taking a loan to enact a mulligan just because oil prices have declined. No, you’re invested at that point, and you have to continue drilling to service that debt that you took out.

If OPEC is right, and if we do see supplies dry up from ‘non-OPEC oil production,’ that could be a very dangerous thing, and we discussed this premise in the article Apple, Oil to Cue Global Markets. So, from here, it looks like OPEC is playing a game of ‘chicken,’ in the effort of driving their competitors out of business. Should prices continue falling, these shale operators are going to be smashed because every barrel of oil they drill out of the ground is losing even more money. This will lead to trouble in high-yield debt, as a significant amount of credit was taken out to finance such operations, and with oil prices over $80 a barrel, that looks like a smart investment; but at $30 or $40 a barrel, most of those shale operations are slow burns.

Should this happen, a domino effect can take place through financial markets, as six years of low rates have driven significantly massive flows into many debt issues, and high yield bonds beginning to default could add pressure on the entire banking system. It really just depends how quickly the price of oil falls.

For now, the trend is down, but since we’re at lows – there isn’t a direct short-setup for traders to jump on. As we’d advised in Apple, Oil to Cue Global Markets, traders shouldn’t look to chase just because we’re at new lows. Instead, wait for price to move up to resistance (which can often show in the vicinity of previous support), and then look to take a short-entry with a smaller risk amount, targeting the previous lows on the profit target side. The setup that we discussed in Gold a little earlier is a prime example of this… traders that chased that down-trend last week are likely licking their wounds now. But for those that waited, an attractive setup presented itself with a potential 1-to-3 risk-reward ratio in the direction of the trend. Look to do that in Oil. Below are some potential levels to look for future resistance.