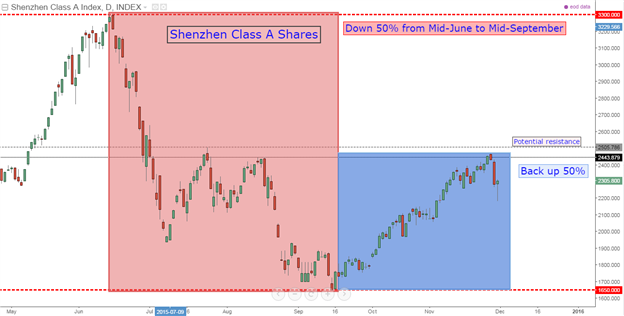 - This continues the strain of bad Chinese data, but over the past two months, stock prices have continued to move up, indicate hopes that stimulus will ‘work.’ But this continued pace of bad data indicates the opposite.

- The December FOMC meeting can become vitally important for the continued rally in Chinese shares, as a rising-rate, tighter-liquidity environment can spell trouble for Emerging Market economies, China included.

Chinese data hasn’t been very encouraging of late, yet stocks are continuing to cling onto gains for the year. The most recent punch on the data front was from PMI, which came in at its lowest level since 2012. Chinese PMI came in at 49.6 for November, down from 49.8 in October and below the 49.8 expectation.

The troubling part about this continued contraction in PMI is the fact that six interest rate cuts since last November combined with multiple reductions to reserve requirements haven’t yet been able to re-fire growth within the Chinese economy. As an industrialized economy, this PMI number is vitally important to continued growth within China, and the continued lag in data makes that 7 percent growth target look even more daunting.

This continues the strains of bad data out of China. In mid-September, Chinese markets were continuing their descent from the summer swoon as continually negative data was indicating the potential for a ‘hard landing’ in the economy. Just a month later, we saw a brutal print that saw imports into China drop by over -20% year-over-year, while even exports came in with a contractionary print at -3.7%, which, again, for an export-based economy is a really troubling thing.

By then, Chinese regulators had already increased stimulus in a variety of ways. We discussed some of these measures in mid-October in the article, More Chinese Stimulus Prods Markets Higher. And, for most intents and purposes, they’ve worked, at least for now, as Chinese stocks stopped their voluminous drop and began ascending higher, exactly as they had before the fears of meltdown had gripped the globe. We discussed this amazing reversal in the article, Don’t Call it a Comeback: Small-Cap Chinese Stocks Throttle Higher. Just a month later, the entire situation seemed different, as Chinese stocks had throttled back by 20% or more, and we noted this in the article Is There a New Bull in the China Shop?

But more recently, these up-trends have begun to become questioned. The data continues to show that stimulus, at least at this point, has yet to actually ‘work,’ in China. Regulators are attempting to offset domestic issues, but frankly, international developments are likely playing a larger role in the continued weakness of the Chinese economy than regulators would like. As the Fed walks towards that first rate hike in nine years while commodity prices continue to bleed, many worry that the Chinese economy would have a lifeline cut as cheap rates in the United States get not so cheap (with a fed rate hike, and a rising rate cycle throughout next year). This could make investments in China not nearly as attractive, as a rising rate environment in the United States will draw capital, capital that is much needed in emerging market economies like China as they attempt to turn the corner.

We’re not the only ones that identified these risks. In a rare type of announcement from a Chinese politician, President Xi Warned that China Faces Considerable Downward Pressure two weeks ago. And as China got closer to IMF approval for SDR-inclusion, we’ve heard more pledges of market-based reforms, and we even saw stocks get slammed last Friday as it appeared that regulators were pulling back support.

Where do we go from here? Nobody knows. This type of activity (major volatility that runs counter to data) will often show up at the top or bottom of a move, or near a major turning point. The next couple of weeks are going to be vitally important for markets, and this can certainly provide the ammunition for a major turn, as we have a trove of data to get through before the Fed’s decision drops on December 16th. Nobody really knows what will happen from here: Neo-Keynesian economics has never faced such a test, and we’ve never seen what a ‘lift-off’ scenario would entail after so many years of ZIRP. Our own Christopher Vecchio outlined what the ramifications of a rising rate cycle out of the United States might mean, and David Rodriguez took a ‘bigger-picture’ view by looking at three factors that could indicate a perfect storm of volatility is ahead.

As to how to play it: Look to Japan. There are a few reasons for this, key of which is that Japan is actually considerably more vulnerable in the long-term than China. Japan has an aging population that will likely wreak havoc on economic growth for the next 40-50 years, while China is a still-growing, industrialized nation. We discussed some of that vulnerability for the Japanese economy in yesterday’s article The $64 Billion Drawdown Heard Around the World.

As a key trade partner of China, Japan will display a degree of correlation with the Chinese economy. And should China recess, this will likely spell pain for Japan in two ways: 1) a major hit to Japanese exports, much like we saw last month with that -20.4% contraction to imports, which simultaneously happened as the Japanese economy went back into deflation. And 2) Should China recess as part of another global ‘flight-to-quality,’ we’d likely see Yen strength, which would make Japanese exports even more uncompetitive. This would be even more pressure for the Chinese economy. And 3) This would return Japan, the Yen, and the Nikkei back to their long-term trends that were so well engrained in markets before ‘Abe-nomics’ changed matters in 2012.