USD Setting Up While Oil, Copper Continue to Bleed

- It’s a holiday-shortened week in the United States with Thanksgiving on Thursday, but high-importance US Data on Tuesday and Wednesday mean that the week will probably not be completely quiet.

- Oil prices are also facing continued pain, and with new bank forecasts for $20/barrel, we could see continued headwinds for Emerging Markets and other Energy-exporters.

Volatility has a tendency to increase near the top or bottom of major market moves, and the continued drive being seen in Copper and Oil prices are indicative of such an environment. We discussed the ramifications of the Copper move last Tuesday in the article, What Might Copper Prices Be Telling Us About Global Growth, and we’ve been talking about similar themes with Oil over the past few months, as dropping prices continue to expose weakness within economies that have heavy exposure to energy. But the meltdown being seen in these markets (along with many other commodities) doesn’t yet appear close to being over, and with even further evidence of continuation in these trends, we’re now beginning to see investment banks jump out with forecasts and long-term price targets in these markets.

For Oil, the most recent forecast is for $20/barrel, courtesy of Goldman Sachs. An analyst from Goldman said that there was a 15% chance that Oil hits $20/barrel in 2016. The big factor here would be OPEC, and whether or not they’d cut production to temper the declines being seen in Oil prices. On Sunday, Venezuelan Oil Minister Eulogio del Pino said that OPEC could not allow a price-war to continue developing in Crude Oil, and must take action to stabilize prices soon. If OPEC doesn’t take action in 2016, he thinks prices could fall to the mid-20’s.

But think about this for a moment: For OPEC to counter falling prices, they need to cut production. So, you have to go into all of these countries that are already arrested by economic development and say ‘you need to stop drilling so much of that commodity that makes you money.’ Take Mr. del Pino’s own Venezuela, that is currently in the midst of hyperinflation. The inflation there is so rampant that the country has stopped reporting the number: The last read that we had was in December of last year when inflation came in at a rampant 69%. And just because they’ve stopped reporting it doesn’t mean that it’s stopped: Just in August, the Venezuelan government added another zero to their currency in an effort of ‘re-flating’ their monetary system. For anyone with any type of history in economics, you’ll probably know that by the time an economy gets to the point of throwing extra zeros on their currency just to tell their own citizens that it’s worth more (when their spending and investment decisions suggest otherwise), it’s probably too late already (ala Zimbabwe).

This is a severe example, but does serve as an indication as to what happens when an economy is too-integrated around a single commodity. Commodity prices change, and as these changes take place that has a butterfly effect on long-term economic viability of the economy that’s ‘betting the farm’ on the price of crude oil, or zinc or any other commodity on the planet earth. Economies, like investors, need diversification; and without it, they’re simply exposed to pricing pressures and major market trends in commodities.

Continued weakness in Oil prices will likely spell continued pain for the global economy, especially Emerging Markets that have a heavy dependence on energy exports. 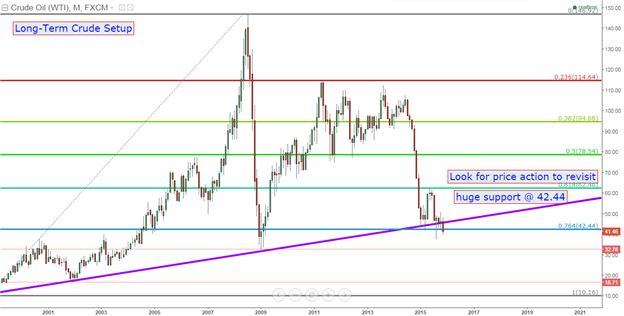 Oil isn’t the only commodity facing pain: We discussed the pain seen in many metals markets last week, and as we touched on, this may be more indicative of upcoming economic pain than what we’re seeing in Oil. Because while lower Oil prices will often mean lessened margins for Oil producers (which, in-turn can bring on slower growth, lower inflation, and higher unemployment), Copper prices are going to indicate supply and demand at a given time. So, if demand for Copper is decreasing, copper prices will move lower to reflect this lessened demand which could be indicating slower growth in the future; while Oil’s supply is going to be determined by a cartel and how much crude they want to pump out of the ground at a given time.

So, while both of these commodities (and in-turn, their price movements) can carry a huge impact for an economy, Oil and Copper (and most Metals) will likely see different drivers of supply and demand. What we’re seeing in Copper right now is not healthy. Last week was the sixth consecutive week of losses for Copper, and we’ve just sank to a new 5-year low. As we discussed last week, Copper has huge industrial usages as infrastructure is built out, as it’s a key component of electrical wiring. So as growth increases, so does the need for copper so that electricity can be wired for new buildings; but as growth slows, like what is happening in China right now, the need for copper decreases and the price, in-turn, moves lower to reflect that.

This is what’s been happening for the past four years in Copper prices, as we’ve essentially seen prices get cut in half since October of 2011. This is while Chinese growth has been slowing which pretty much everybody in the world has known about. But what was different was QE, and the fact that cheap money ran through the global economy and this helped to soften the blow from a slowdown in Growth.

Just last week, President Xi warned that the Chinese economy was facing downward pressure, and this only hastened the decline in Copper prices.

Moving forward, given that we’ve already seen a massive move, long-term price targets can be difficult as analysts would essentially need to guess an answer in the game ‘how low can Copper go?’ As we opened this article with, volatility usually increases near the top or bottom of a move, and as George Soros said, this is often when markets are least efficient.

We’ll likely see some near-term support develop in the $2.0000 range, but after that, longer-term price targets essentially become guesswork given that we haven’t been in this price vicinity in such a long time. 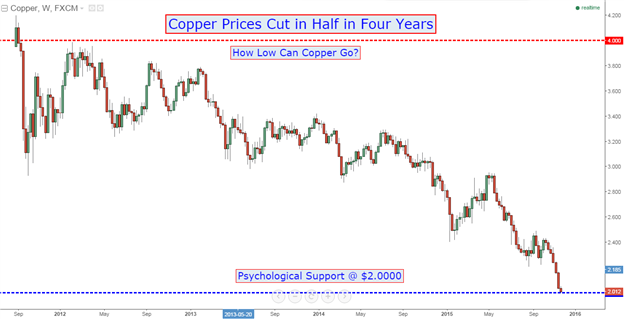 US Holiday on Thursday, but Heavy Data Every Day Until Then: US markets are closed on Thursday in observance of Thanksgiving, and with the heavy data on the calendar for the following week, its logical to expect many traders to take this week off or, at the very least, to pull back on risk. The following week brings on the ECB-meeting in which much of the world is expecting an extension to European QE with the final Non-Farm Payrolls report before the December Fed Meeting just 24 hours later (December 3rd and 4th respectively).

But this week brings on US GDP on Tuesday and US Durable Goods orders on Wednesday, and given the near-term setup in USD, this could be a crucial time to position-in ahead of next week. Last week produced a Doji formation on the US Dollar, which can often be seen at the top or bottom of a swing in a market, as buyers come in to protect support (or sellers come into sell off of resistance). Last week’s Doji came after the strong break of the previous symmetrical wedge pattern that was driven by NFP, and as December is now looking likely for a rate hike, buyers have continued to defend support at values near old resistance.

With heavy USD-data on deck for both Tuesday and Wednesday of this week, traders can treat this setup in an aggressive or conservative manner. The aggressive setup would be to strike earlier, and to look for extension of USD-strength at either of the next two days’ worth of reports. Support at 12,100 could be key for this approach, as it would allow traders to wedge their stops below last week’s low.

The more conservative stance would be to wait, and to try to find USD-weakness over the next couple of days in order to ‘buy cheaply’ ahead of the following week. With an expectation for even more QE out of Europe, this could spur USD-strength ahead of Non-Farm Payrolls on December the 4th. 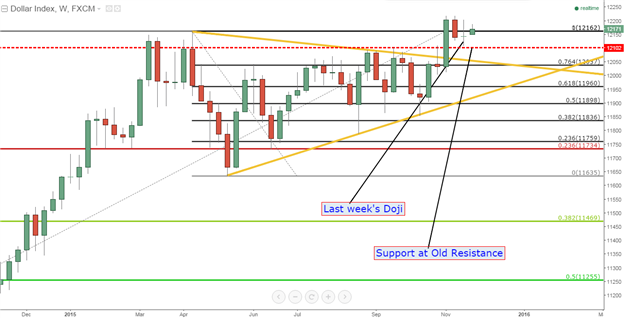