What Might Copper Prices Be Telling Us About Global Growth?

-Copper prices hit a new six-year low this morning, and this continues the slowdown that has seen the commodity trade off by more than 53% since its February, 2011 high.

- Copper prices and emerging market economies can exhibit a strong correlation based on the industrial usages of the commodity; and this relationship held true in China up until last July.

- We’ve seen these trends de-couple as Central Banks have off-set this weakness with monetary policy; but which will give first: stock prices, or commodity prices?

Copper: One of the most impacted areas of markets over the past three months have been commodities, particularly Oil and Metals. The big driver, at least initially, of these lower prices was the slowdown in China. As a growing industrialized nation with an enormous geographic scope and a breakneck growth rate, China became a large consumer of raw materials and commodities. A cheap dollar over the past six years only accelerated these themes, as it made the relative cost of these commodities cheaper on a per-unit basis, all factors held equal.

But Chinese growth began to slow heavily from the 10% growth rates seen for much of the decade leading into 2014, down to 8%; followed by a 7.5% growth target in March of 2014, and then a target of ‘around 7%’ in March of 2015, and most recently, a 6.5% target set for 2016 to 2020. This slowing of growth has had a dramatic impact on Commodity prices, and perhaps one of the best markets to look at for this evidence is in Copper. Copper has significantly wider industrial usages than Gold or Silver, and will often be found in electrical wiring. Copper is the preferred electrical conductor in pretty much every area of wiring with the exception of overhead electric power transmission, in which aluminum is often used. This means that a growing, industrialized economy will use a ton of copper, as wiring is going to be a necessity as a country builds out its infrastructure.

On this theme, Copper prices hit an all-time high in February of 2011 at $4.58, driven by rampant Chinese demand as their economy expanded at a break-neck growth rate, and helped in-part by a weak US Dollar. But as China has slowed, Copper prices have seen a significant move as this demand for Copper’s industrial usage has waned. After that high in February of 2011, Copper prices have moved down by more than 53%. In the chart below, we’re looking at the ETF with the ticker symbol of ‘COPX.’ This ETF represents Copper miners, and as we can see below, these companies have taken a major hit over the past four years. 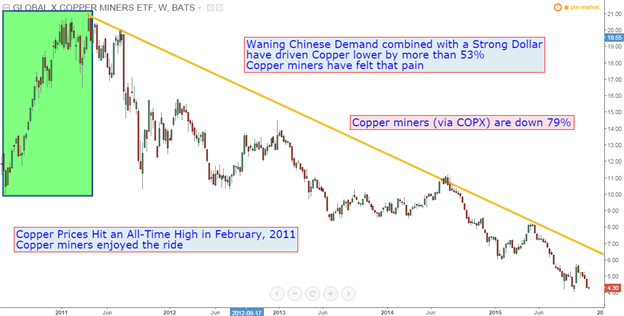 For a long time, Chinese stock performance mirrored commodity prices. Like most correlations, it wasn’t perfect, but it was logical enough for traders to build strategies around the premise that a growing Chinese economy would need more commodities to continue building infrastructure, and this increased demand to the point where prices continued to rise.

But as Chinese growth cooled, and as Commodity prices began to take a dive, something curious happened. Stock prices in China began to rise while commodity prices drove lower to reflect this lessened demand that came along with slower growth rates. July of last year is when the real de-coupling began, and in the chart below we can see this direct relationship between copper and Chinese Stock prices de-coupling. 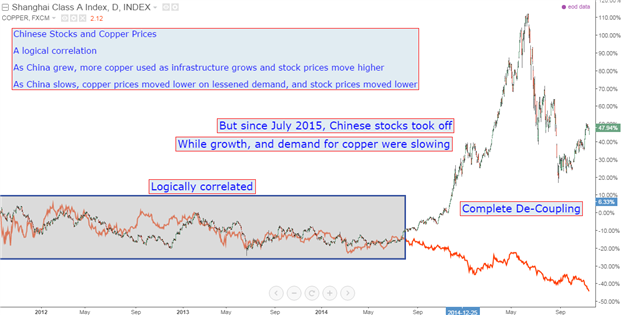 What might this de-coupling of these trends be telling us? The obvious point is that something is changing, we just aren’t yet sure of the ‘what.’ What is certain is that Chinese growth is slowing, and that statement can probably be applied to most Emerging Markets right now. And from that, we can derive the expectation for additional weakness in metals prices, and this can lead to additional pain for economies with significant mining operations, as lower Copper prices will squeeze margins, and that leads to less hiring, lower wages (or fewer wage increases) and an overall contraction in business (as can be seen in the above chart of ‘COPX’). But Copper is down almost 30% over the past year, and Chinese stocks are up over 40%, and that includes the massive move lower from this summer. So something else is going on.

One of the reasons for this de-coupling, at least one of the more recent reasons, is the outsized amount of stimulus that China rolled out in response to that summer route in stock prices. There have been over six interest rate cuts in the last year, along with numerous reductions to bank reserve requirements on top of a litany of other measures designed to shore up equity prices. So far, it’s worked. Shenzhen Class A shares are up over 40% from their August lows, while Shanghai Class A shares are up over 20%. 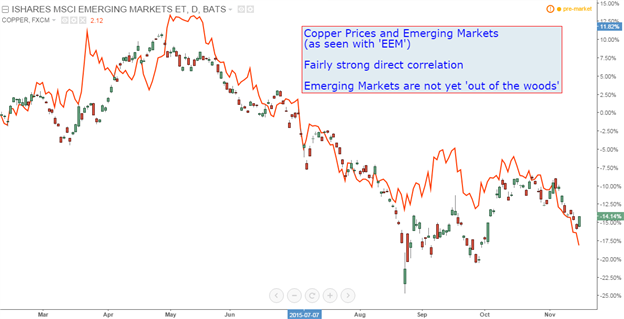 What is this divergence between China and EEM telling us?

In analysis, it’s important to sort out what we ‘know’ with what we ‘think.’ Because if we build strategies or conclusions on faulty premises, then it’s near-impossible to find any real answers because we base our remedies on erroneous logic.

What we do know, and what can be evidenced from falling commodity prices, particularly in a strong industrial commodity like Copper, is that global growth is slowing down. This has been the case for the past few years, and many emerging markets are continuing to see that pain, and we can see further evidence of that in the ‘EEM’ exchange-traded fund. We’ve even seen some pain come into the US economy as the price of Oil has taken a major hit, similarly to how we saw Canada’s economy get ensnared into a recession on the back of drooping energy prices.

But Central Banks in many developed economies are not going down without a fight, and this is why Chinese stock prices have been riding a rocket-ship for the past two months, and this is why US Stocks are rallying despite the fact that it looks like a certainty that the Federal Reserve is going to kick up that first rate hike in over nine years.

So, we can take these facts that we ‘know,’ and begin to coalesce them with what we think. And what we think, is at some point, something has to give. Either stock prices come down to reflect this slowdown in the global economy, or commodity prices start moving back up to indicate actual increases in demand that will often signify stronger growth rates.

Logically speaking, these trends can’t de-couple forever, and that’s something that everybody in the world knows.