S&P Downward Channel: Bull-Flag, or is a Top in Place?

- The blowout NFP report from Friday continues to firm up expectations for a December rate hike, with odds currently at 66% that we’ll be seeing that first hike in 9 years at the December meeting.

- For an early look at larger macro risk trends, watching Emerging Markets like Mexico, Turkey or Brazil; or the EEM ETF as a proxy for these themes.

1. Stocks are looking heavy: It hasn’t even been three full trading days since October’s blowout NFP made a December rate hike out of the United States look all but certain, and already stocks are showing signs of vulnerability. As we walk closer to the December Fed meeting, this is a theme that could certainly hasten as this is somewhat similar to the catalyst for the pain across markets in August and September.

In August/September, much of the world was anticipating a rate hike at the September Fed meeting, and given the multiple points of pressure being seen around the world regarding the slowdown throughout Asia and the massive price drops seen in commodities, the prospect of tighter monetary policy out of the United States was enough to trigger ‘risk off’ trends. And this makes sense, given the fact that Central Bank support has been one of, if not ‘the,’ primary driver of risk trends for the past six years, and the prospect of the largest Central Bank in the world finally stopping this ‘extraordinary accommodation’ on the way to ‘normalizing policy’ is enough to question how much risk is being carried in a portfolio.

With ZIRP, investors are incentivized to take on risk (given low rates in less-risky investments), and this has a tendency to build-up asset prices (what some people might call a ‘bubble’). The longer that rates stay low, the higher asset prices move simply from a dearth of available, relevant investment options. And once policy does normalize, we can see investors selling out of those riskier asset classes to a) avoid getting caught on the wrong side of a trend as the Central Bank continues raising rates and b) to go into those safer investments that now have a higher yield (opportunity cost).

Case in point – we’re in a period that many still call ‘The Great Recession,’ and yet stock prices are near all-time highs?

So, quick question – if you and 100 friends are in a room that catches fire, are you going to wait for the first few buddies to jump out of the room before you follow? Probably not, that’s a quick way to get yourself burned. More likely, the second that you smell fire or hear an alarm or see even the slightest sign of smoke, you’re gone. That’s the way it should be; these are the survival instincts that keep us alive.

Markets are no different. If it’s obvious that pain may be coming down-the-road, investors won’t usually wait for the room to start burning before they try to get out of the door. Because when the mass-portion of the group tries to fit out of a single door, a stampede may ensue, and it’s much better to be out before that happens. This is what the major sell-off in August was: Investors were scared that the past six years of QE-fueled risk trends would burn to the ground as the Federal Reserve finally ended their ‘extraordinary accommodation,’ and nobody wanted to wait around to see how bad the situation might be.

And things got worse, at least for a few weeks, until the Fed backed off of a rate hike in September with a hat tip to pressure in the global economy. We saw expectations for that first rate hike out of the United States get kicked all the way out to mid-2016, and normalcy was restored as stock markets started going back up again. The room did not burn down this time.

But only six weeks later, and with markets bubbling back in their usual, bullish states, the Fed is faced with this same dilemma: To hike or not to hike. In the October meeting, they signaled that they’re pretty much ready to go, as the removed that mention of ‘international developments’ as a reason for waiting on the hike.

But it was last Friday’s NFP print that seemed to really solidify matters, as the previous claims of the Federal Reserve that the eventual hike would be ‘data dependent’ can be hard to ignore with such a bullish jobs print. This is what’s really hastened those rate hike expectations, and, in response, has brought in softness in some of these major risk trends.

On the S&P, we’ve seen price action develop a fairly consistent trend channel since the highs of last week. This could potentially be a new ‘theme’ in markets, in which we see risk assets sell-off now that a December rate hike looks fairly certain. But for now, this is a bull-flag formation until ‘bigger picture’ support levels give way. The big support level that’s nearby is 2065, and just below that we have a major level at 2021 and again at 2000.

For a deeper technical look at the S&P, the Technical Outlook report from last week will outline each of these potential support and resistance values.

2. More Bad Chinese Data: In yesterday’s article, ‘Is There a New Bull in the China Shop,’ we looked at the massive gains that have come back in Chinese stocks as the world took a step back from the ‘Fed rate hike ledge’ in August and September. We also noted, that while these massive price gains were taking place in Chinese equities, Chinese data was, for most intents and purposes, ‘a little bit soft.’ The past two months have seen +16% contractions in imports coupled with contractions in exports as well, which for an export-based economy like China, can be really troubling. And last night we got another disappointing piece of data, when CPI came in at 1.3% versus an expectation of 1.5%, led by a big drop in food prices. Producer prices dropped for the 44th consecutive month, and we finally saw Chinese stocks move lower, albeit barely as the Shanghai Composite closed down by -.2%.

But as we’ve been saying in these market talks for the better part of three months: The bigger issue here likely isn’t related to China, and probably has something to do with the largest Central Bank in the world looking to ‘normalize’ policy when ‘normal’ doesn’t really mean ‘normal’ anymore. With such a huge drop in commodity prices, many American companies are exposed; and should rates move higher, this would likely exacerbate problems for commodity-exposed companies as their cost-of-carry increases, thereby further cutting into profit margins, and decreasing the probability that they’d be able to pay back debt that was taken out while rates were near-zero.

But the Fed doesn’t have an easy task ahead: If they don’t hike, they run the risk of stoking asset prices even more (i.e., putting even more air into the bubble), and this could make the eventual impact of ‘policy normalization’ even more severe when, inevitably, it happens.

So where do we go from here? Nobody really knows. There is no precedent where the global economy is at right now, and there’s no playbook for us to read from. TARP was designed to stop a banking failure, and QE was designed to keep liquidity flowing; but neither were ever really designed to grow an economy… they’re merely measures to keep things from melting down. But with Washington not taking the opportunity that six years of QE has bought them by embarking on stronger fiscal policy, we find ourselves in a very similar position that we’ve had over the past six years: Asset prices are showing strength, but many of the meters within the economy aren’t.

But now, this isn’t just a US problem, as most of the developed world is hung over on ZIRP.

An operable way of playing this theme can be in Emerging Markets, because if we are going to see something larger on a macro-front, Emerging Markets will likely feel the pain far more quickly, and far more severe than their developed counterparts. On the chart below, we’re looking at ‘EEM’ which is iShares MSCI Emerging Markets ETF. This can be thought of as a type of ‘high-beta international equity investment.’ On the below chart, we’re looking at EEM (candlestick) compared to SPX500 (red line chart), and notice how they’ve put in similar movements with the exception of the most recent ramp. While the S&P has traded towards those all-time-highs, EEM is merely bouncing up to a ‘lower-high.’

Should matters get worse and should the ‘risk off’ theme materialize similar to how it did in August and September, this would likely be the ‘eye of the storm.’ 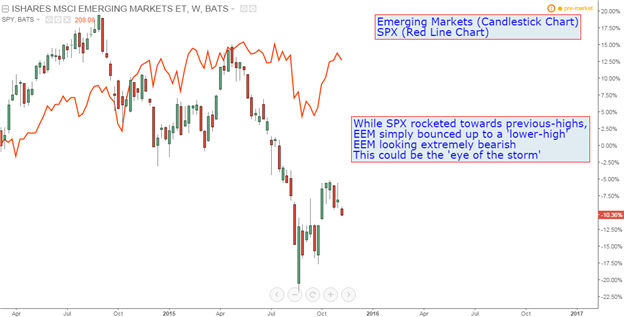