Is There a New Bull in the China Shop?

- Chinese stocks continue their brisk ascension after the fright of this summer.

- Chinese data continues to disappoint, raising the question of whether this is a blip in the radar or the start of an even larger trend.

- With a December rate hike now looking probable, will these ‘risk-on’ trends continue with the same gusto?

One of the hallmarks of a healthy equity market is a constant stream of Initial Public Offerings, as private firms look to tap public markets for new inflows of capital. As markets heat up, the attractiveness of ‘going public’ increases, as companies can carry stronger valuations and potentially bring in even more money due to the desire of investors to own shares of younger, developing companies in such strong and growing markets.

China was no different during their massive bull-run that came into question this summer as stocks began to sell-off. As a matter of fact, Chinese IPOs were often considered a ‘sure thing’ by many Chinese equity retail investors (until markets started going down in June, that is). In China, regulators control the timing and pricing of IPO issues, and many deals this year have been priced at 23x earnings, which is massively undervalued compared to other Chinese stocks. So for the investor, they simply had to buy on the first day of trading and wait for investors to increase the valuation of those earnings. Sound similar? This same type of thing happened in the United States during the tech boom, when investors would bid up prices on stocks like Pets.com or eToys.com.

As Chinese markets began to recess this summer, Chinese regulators suspended new IPOs in an effort to stem the broader slow-down in the market, under the premise that new issues were taking money away from already existing companies, and by eliminating any new share issues regulators would be able to keep capital in these stocks in the effort of keeping prices high.

But since mid-September, Chinese stocks have stopped going down, and by many accounts, are looking extremely-bullish again, as if nothing ever happened. A-shares on the Shanghai Composite (SHCOMP) are up over 26% from their August lows. 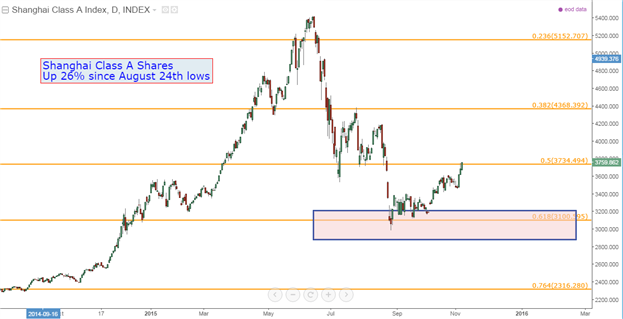 A-shares on the Shenzhen Composite (SZCOMP), which is usually smaller and consists of many tech-related companies, are up a whopping 36% since the lows of mid-September. This is over 1/3rd of the indexes value in less than two months; a huge move to be sure. 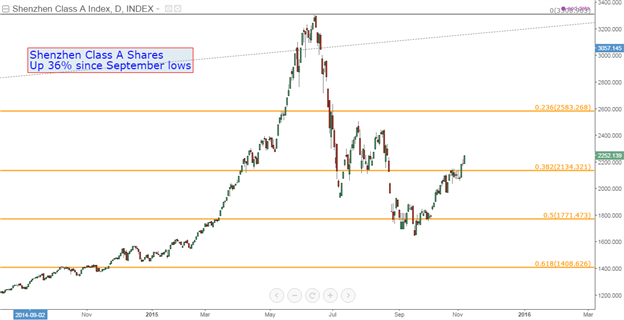 One of the main drivers of such a move is continued government assistance; as Chinese regulators have put up six interest rate cuts along with numerous modifications to bank reserve requirements. We saw a major move from Chinese regulators on August 25th, and this is what helped to mark the lows on the Shanghai Composite; but unfortunately that couldn’t be said for the rest of the Chinese economy as additional signs of slowdown continued to trickle in. We saw another surprise move towards the end of October, and the timing of this announcement was especially helpful, as Chinese regulators cut rates and RRR just after Mr. Mario Draghi had spoken of the ECB’s plan to ‘re-examine’ their QE-outlay at the bank’s December meeting. This meant that markets were getting looser monetary policy from two of the three largest Central Banks in the world at the same time, and this helped to offset some of the anxiety introduced by the Fed’s continued insistence towards a 2015 rate hike.

Since then, global equity markets have went ballistic with stocks around-the-world have continued to ascend in one of the most exuberant ‘risk-on’ rallies of the past six years. And with the pain visibly receding below the headlines, Chinese regulators have now re-opened the door for new initial public offerings; signaling that the worst may be over.

But has the world turned a corner? Are we at a stage where these massive valuations can be justified? Many signs point to ‘no.’ One of the more troubling data points from October that was near-completely obscured by hopes of additional Central Bank ammunition was Chinese trade data. Chinese imports fell a whopping -20.4% from a year earlier, and even exports were down by -3.7%. This was a shocking print that, for an export-based, industrial economy, is very troubling.

And just yesterday, we saw this theme continue as exports moved lower for the fourth consecutive month. October exports were down -3.6%, and imports (in Yuan terms) were down -16%. And given the timing of China’s move to a more consumer-oriented economy, this continued contraction in imports could spell trouble for the rest of Asia.

But for now, risk is on in a very big way as it doesn’t look as though regulators are close to being done yet.

One thing that could prove troubling for these trends, if history is any guide, is the prospect of tighter monetary policy in the United States. After the blowout NFP print for October Non-Farm Payrolls, it looks as though we’re finally nearing a rate-hike out of the United States. Expectations have massively increased for a December-move, and earlier in the summer this prospect seemed to freak out many investors as the global economy juggled a broad-based Asian slowdown along with carnage in Commodity prices. These forces were so significant that the Fed backed down from a hike in September, and they may do it again should the ‘risk-off’ theme begin to materialize again.

And sure enough, as a December rate hike has begun to look more prominent, we’ve started to see what could be the beginning stages of weakness show up in US stocks. After throttling up to a new short-term high on Wednesday of last week, the blowout NFP report from Friday saw sellers come into the market to produce the second consecutive daily Doji. This can be a sign of indecision in a market, and given the tonalities of the themes that we’ve seen here of recent, this price action makes sense. With numerous Fed speeches on the docket for this week, watch US stocks, particularly the S&P 500 as signs of a December hike become more telling.

For now, we have a down-ward sloping channel that’s developed on the shorter-term SPX500 charts, and this could be just another bull-flag on the way of up-trend continuation; or we may be at a potential top given the now probabilistic prospect of a rate hike in December.