Euro Weakening Ahead of Draghi (Again)

1. Euro Selling-Off ahead of Draghi speech at 1:00 PM ET: The past couple of weeks have been big for the Euro, and with a scheduled speech from Mr. Mario Draghi later on today, it looks as though traders are trying to get in front of any potential dovishness by selling the Euro in advance. On Thursday of the week before last, Mario Draghi took the podium for the most recent ECB meeting and announced that the bank would re-examine QE at their next policy meeting in December. This was largely construed as being a signal that the bank would expand their program to offset continued deflation and lack of growth in the European economy. After that announcement, the Euro soundly sold-off against most major currencies as this expectation for further easing got priced-in.

And then last week, Ms. Janet Yellen took the stage for the Federal Reserve’s most recent meeting, and took on a somewhat surprisingly-hawkish tone, in which we saw the bank remove the phrase ‘monitor developments abroad,’ which was taken as a signal that the Fed was no longer concerned enough about the factors that contributed to them holding back from hiking rates in September, namely a major market sell-off throughout Asia and continued carnage in commodity prices.

This can help set the tone for the coming months, at least ahead of December, as traders try to get in front of one of the most certain themes in markets over the past six years: Central Bank support.

We outlined two ways to trade this theme in two separate markets yesterday in the article, Two Ways to Trade the Euro and the Dollar, and this could certainly be applied to the cross consisting of both currencies in EUR/USD. After a voluminous run lower from May of last year, the Euro traded into March having found support at the 1.0450 level; and spent the rest of 2015 trending higher in a bear-flag formation (indicated on the below chart, in Green). But ECB gave markets the ammunition they needed to sell the EUR/USD below the flag, and lower price action lows ensued.

But we saw profit taking moving into last week’s FOMC announcement, and EUR/USD came back to test a prior support level as new resistance as traders tightened up risk before an expected-dovish announcement from the Federal Reserve. But when Ms. Yellen took on that hawkish-tint, traders had reason to jump back in the short-side of the Euro, and we’ve seen this down-trend come back. The secondary bear-flag in EUR/USD that we outlined yesterday of a much shorter-term variety, has now been broken as well. Potential upcoming support at 1.0940 and 1.0900 could provide motive for profit-taking or placing additional entries.

At the end of September, we outlined two ways to look at timing an entry in EUR/USD, using the bear-flag mentioned above combined with SSI, or Speculative Sentiment Index. As mentioned in the article, traders could wait for retail positioning to move to ‘net long,’ at which point the potential for an extended down-trend could be more attractive. Well, we had that criteria met shortly after ECB made the announcement to re-examine QE in December, and we’re still seeing retail traders net long.

2. Do you want to avoid the US Dollar to avoid Fed Vacillation? This is understandable considering we’ve heard the bank promising a rate hike for over three years now, only to continually pull back anytime we get close to an actual rate hike due to exogenous pressures.

We discussed this premise in the article, Risk Trends Vulnerable Ahead of Heavy Data Week, in which we pointed out that traders looking to get Euro-exposure without taking on USD-risk could look towards EUR/JPY, as the Bank of Japan wasn’t likely in a position to increase or extend their current QE-outlay given the multiple pressure points being seen in the Asian economy. And we further extrapolated on that theme in the article, The Yen as the Safe-Haven Vehicle of Choice.

What does all this mean? There were plenty of reasons for traders to come in and buy the EUR/JPY, if even just for a short-term, to either trigger long-reversal positions or to close short positions that were in profit. But support doesn’t always mean that a trend is over, as this could merely be a pause in the process. On the chart below, we highlight a few potential levels that traders can use to set risk levels on short EUR/JPY positions moving forward.

3. China Signals Acceptance of Slower Growth, Albeit Barely: This is an item that has rather opaque connotations, at least initially, as we’re not really sure what this might entail for the manner in which Chinese regulators steward their economy moving forward, but as largely expected, Chinese President Xi Jinping announced that slightly lower growth targets would be acceptable, moving down to a 6.5% target from the pre-existing 7% threshold. With this metric of 6.5% growth for the remainder of the decade, the Chinese economy would still be able to accomplish their goal of doubling from the year 2010 to the year 2010.

But to put this in scope – The Shenzhen Composite Index is up over 33% since the middle of September, when nothing really ‘great’ has happened for the Chinese economy, and this is in a matter of 6-7 weeks. Doubling the size of an economy over a 10-year period means that stock prices and actual growth have become considerably divorced from each other, and the same statement could probably be proffered for the rest of the world right now, as QE-led gains have left stock markets looking frothy ahead of heavy data for the remainder of the week.

It would be impossible to fully prognosticate what changes might come about from this simple modification to China’s growth targets, but should this remove the necessity for the country to continue supporting break-neck equity market gains, this could have larger connotations for the rest of the world. We’ve seen Chinese stocks softening over the past few days, and last night was no different, as the Shanghai Composite traded lower by -.25% and the Shenzhen Composite was down slightly with a -.03% loss.

For now, Chinese stocks are in a very interesting area. We’ve had a major reversal of recent, but if you look at a longer-term chart of Chinese A-shares, you’ll notice that we really just ran into a 61.8% Fibonacci retracement. This story isn’t likely over yet. Traders can continue to watch for longer-term resistance on this chart in the ~3,750 neighborhood, and should resistance hold or set-in around this area; we could see risk come off in a very big way. 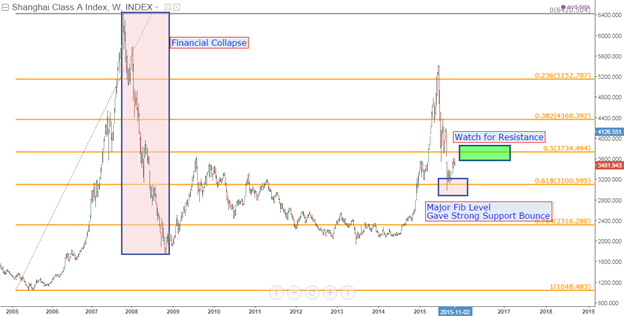