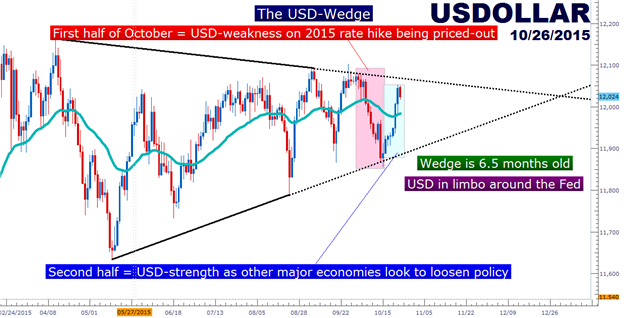 1. China cut interest rates after Asian equity markets had closed on Friday, and this morning was the first session that traders had a chance to price-in this new interest rate and RRR-cut. Oddly, Chinese markets were tenuous throughout the session, going into negative territory with less than an hour left in trading. A quick late-session move brought Chinese equities back into positive territory, but given that this was the first session after the rate cut, the response was far more muted than one might expect. There could be two likely reasons for this. 1) That rate/RRR-cut was already priced-in, or B) the rate/RRR-cut wasn’t as much as what markets were hoping for.

Regardless of the answer, markets will likely be looking forward to a heavy week of data for directional cues, and this week is absolutely loaded on the data front. The big items on the docket are, as has become usual, Central Bank announcements. We hear from the Fed on Wednesday, followed by the RBNZ just a couple of hours later. On Friday (Thursday night in Europe and the US), we hear from the Bank of Japan in an announcement in which has seen increasing expectations of an additional QE-outlay as Japan grapples with deflationary pressures. Each of these Central Bank announcements can inspire heavy volatility, so be very careful later in the week as the potential for reversals is extremely high around each of these meetings. We’ll discuss ramifications of each of these throughout the week in these market talk pieces, if you want to be notified as we publish, you’re more than welcome to join my distribution list: Click here to be notified as new Market Talks are published.

Outside of Central Bank announcements, we have high-impact data each day for the remainder of this week, with a heavy focus on US-data announcements. This can be huge given the volatility that’s been seen in the US Dollar of recent. The first two weeks of October saw considerably US Dollar weakness as a 2015 rate hike was essentially being priced-out of the market. But mid-month, support came in as it became apparent that, while the US may not be hiking rates anytime soon, it’ll likely be one of the few economies not looking at looser policy anytime soon (as in, we’re not getting QE4 from the FOMC unless something huge changes). So for the second half of the month, we’ve seen considerable USD-strength on the back of deductive capital flows as the ECB announced that they’d ‘re-examine’ their QE-outlay in December while China loads up the liquidity cannons and Japan walks closer to their expected increase in bond purchases.

Capital in this world only has so many places to flow, and by process of elimination we’re seeing that move into USD right now. This week is loaded with USD-data, even outside of that FOMC announcement. On Tuesday, we get Durable goods at 8:30 EDT, followed by Consumer Confidence at 10:00. Wednesday brings Trade Balance numbers ahead of FOMC, and Thursday brings US GDP numbers. Each of these prints can lead to extended USD-volatility; but the big item and the most pertinent matter has become the Fed’s take on when they’re looking to hike rates, so steer your attention to Wednesday for USD-trend motivation.

2. The Euro isn’t messing around: The big take-away from last week was the European Central Bank’s admission that they’d re-examine their QE-outlay at their December meeting. While this was largely expected, investors weren’t quite sure if this would happen this early or if they bank would wait before making any such announcements. This overly-dovish ECB helped to drive the Euro lower as this statement stoked trader’s hopes for even looser monetary policy from Europe; and perhaps more to the point this gave traders a concerted reason to back a trend in a major currency. We’ve seen considerable USD-confusion over the past 6.5 months as the Fed has jockeyed around this first rate hike in nine years; and this is what’s led to that longer-term wedge formation discussed above. The Yen hasn’t been any more helpful, as bad data out of Japan is screaming for more Central Bank assistance, but an already-stretched BOJ has been reticent to tip their hat towards an increase in their current QE-outlay. And China, despite their numerous attempts to stem the slowdown being seen throughout their economy, has thus far been unable to actually turn the corner. There hasn’t been a great reason to get into a longer-term carry trade in quite a while, and the European Central Bank may have just fed traders a lifeline. On the chart below, we’re looking at the bearish connotations in EUR/USD; but the weakness hasn’t been relegated solely to this pair, as we’ve seen widespread Euro-weakness in the wake of last week’s ECB announcement. Christopher Vecchio outlines some of these setups in his article, Next Leg Lower in EUR-crosses May have Started.

Criteria outlined in ‘Is the EUR/USD Down-Trend Ready for Resumption’: 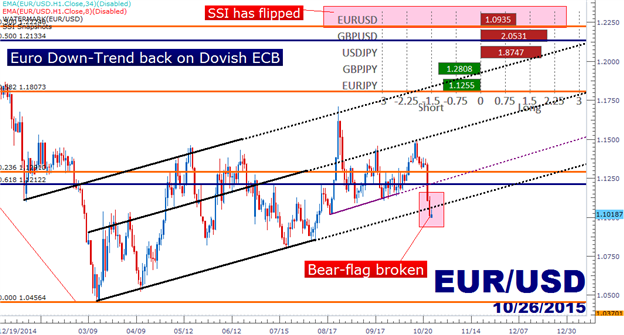 3. Speaking of longer-term drivers in the currency market: We hear from the Bank of Japan on Thursday night, and this was one of the previous providers of a smooth and elongated trend, as ‘Abe-nomics’ triggered a 3-year bout of Yen-weakness that made life easy for traders: One simply wanted to wait to buy low and sell high in USD/JPY as the Bank of Japan drove the Yen lower.

There is only one problem with ‘Abe-nomics’: It hasn’t actually helped the Japanese economy reach their 2% inflation target. And while overall benefits for the Japanese economy might be debatable, the one thing that is certain is that Japan is likely going to continue to fail to meet their inflation targets and at this point, with three years’ worth of intervention, they’re fairly committed to this process of QE and Central Bank bond purchases. This has led many investors to the expectation that the Bank of Japan would look to increase bond purchases, as continued stimulus efforts from China put even more pressure on their key trading partner in Japan, and a lack of a US-rate hike leaves the USD/JPY very heavy for Japanese exporters. We hear from the Bank of Japan on Thursday night in the US, but traders haven’t waited around to sell the Yen, as we broke through numerous points-of-resistance in the latter portion of last week as USD-strength was coming back in through markets.

If the Bank of Japan does not increase QE this week, look to short EUR/JPY to jump on the coalesced theme of Euro weakness and Yen strength. This would be one of those rare situations in which the fundamentals of both economies (and the technical on both of those charts) could allow for an extended long-term trend in which traders can sit back and look to ‘pick off’ entries on retracements in the bigger-picture direction. 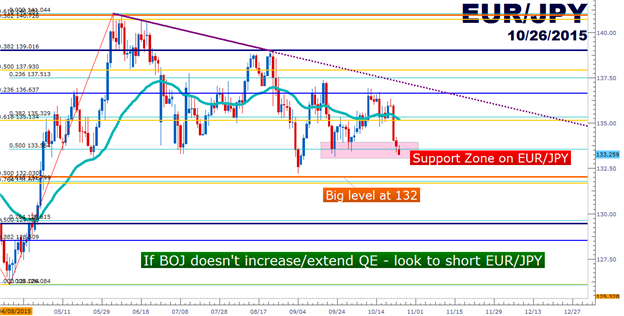