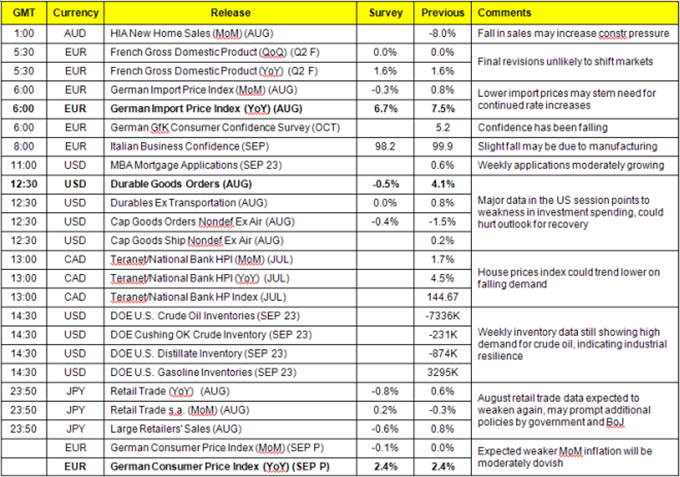 Dollar Meets Support but Does that Guarantee a Rebound?

Dollar Meets Support but Does that Guarantee a Rebound?

There are a lot of anxious traders out there that feel the US dollar is ready to charge higher at any moment. The technical situation with many of the dollar-based majors is the primary support for this belief; but it is important to consider the fundamental aspects of this situation. When we set bias against the burden of catalysts and momentum, expectations for trend development ease substantially. The first step into untangling this highly charged speculative outlook is to recognize that traders are still accustomed to the exceptional volatility that the capital and currency markets have leveraged these past few months. The risk aversion / dollar rally move from last week (following the Fed’s decision to pursue an Operation Twist program instead of QE3) is still particularly fresh in most traders’ minds; and they are ready to jump back on the dominant trend. The problem is that the market can maintain a bias but produce little to no progress on such a move for extended periods.

For the Dow Jones FXCM Dollar Index (ticker = USDollar), the proximity of a seven-month high just below 10,000 and a moderate retracement from highs relative to the S&P 500’s own bounce gives additional leverage to the bullish greenback argument. However, we should recognize the benchmark stock index’s advance for what it is: a swing within a very consistent congestion pattern. Though there have been a few instances of aggressive rallies or declines from this key sentiment index; they have lasted for a few days at most and they ultimately fall within a range between 1,225 and 1,100. If this indeed is a point of reference for capital flows; then it casts a substantial cloud of doubt over the progress the dollar made in the previous week. Was remarkable bullish break for the greenback against the Euro, British Pound, Canadian dollar, Australian Dollar and New Zealand dollar a true trend development or merely a false breakout that was forced by strained technical levels.

There are always leading signals for the development of larger fundamental themes; but it is almost always the case that the active unfolding of these larger drivers engages the various asset classes at the same time – sign of absolute capital flows. The dollar’s surge last week has a better grounding than the conflicting bounce in equities and speculative commodities would suggest. As we have discussed previously, the dollar is not a simple safe haven; but a currency that draws capital when there is an absolute need for liquidity. Panic is rarely a false emotion for the markets; and it can only be held back for so long. What we are waiting therefore is a catalyst to revive the absolutism in sentiment. The consumer confidence survey from this past session simply doesn’t hold the necessary influence. While the September reading’s may be holding near a 30-month low and the reflection on labor conditions is at its worst in 28 years; this fits into a well-known concern amongst American consumers. Nothing new. The same will almost certainly be true of the upcoming durable goods order report in the upcoming session.

Related: Discuss the Dollar in the DailyFX Forum, John’s Video: Do Fundamentals and Technicals Align for EURUSD and AUDUSD Reversals?

Perhaps the most influential catalyst for risk trends and thereby the US dollar is the ongoing European crisis saga. In the past session, the euro managed to ignore remarks by German Finance Minister Schaeuble that suggested the there were limitations to solidarity and that there were no intentions to increase EFSF as well a disappointing bond auction for Spain and Italy. However, it seemed that a story from the Financial Times that suggested that the second bailout program for Greece would need to be renegotiated as its cost was far above what was originally estimated would stick. Why the worry about the second program when the payouts for the first version are being held up? In all likelihood, this is another side effect of no dominant trend behind the market. Without a consistent euro bid, a consistent run is impossible to sustain.

With the Bank of England policy decision scheduled next week, the market’s are increasingly sensitive to rate speculation. That leads to particular interest in MPC members’ standings. Surprisingly, it wasn’t eternal-dove Adam Posen that offered the headlines these past 48 hours. Instead, we have David Miles who says he is closer to voting for QE and Broadbent who said there were no theoretical limits to easing.

Considering the euro is firming against the US dollar with risk appetite rising; one would naturally assume that EURCHF appreciates. Instead, the pair has actually retraced to 1.20. Why? Considering the recent move has been a correction to larger developments and the SNB has done a remarkable job of killing speculative interest with this pair particularly, it works to leverage the natural risk aversion flows outside speculation.

As we move closer and closer to the RBA rate decision next week (scheduled for Tuesday October 4th) we see expectations for a rate cut ease. This is too be expected as the speculative drive behind this dovish call has found no foundation in policy commentary or data. That said, the Australian dollar will not be able to gather itself until this relief is shared with the more distant rate forecast (12 month) which is still extreme.

We don’t hear much from Bank of Canada policy officials; and in recent statements, much of their highlights have been focused on what Europe needs to do to stabilize its financial situation (as that is the greatest global threat). However, Senior Deputy Governor Macklem went a little further by saying Canada would be prudent with stimulus and low interest rates are straining some business models.

After an incredible $270-plus drop in the span of less than four trading days, gold has finally found reprieve. Following up on the mid-day bounce on the opening trading day, Tuesday’s session finally produced a positive performance. This is also a correction move. The metal has a permanent stain that clearly exposes its short fall as a multi-use asset: that it is not a good asset for an absolute need for liquidity.