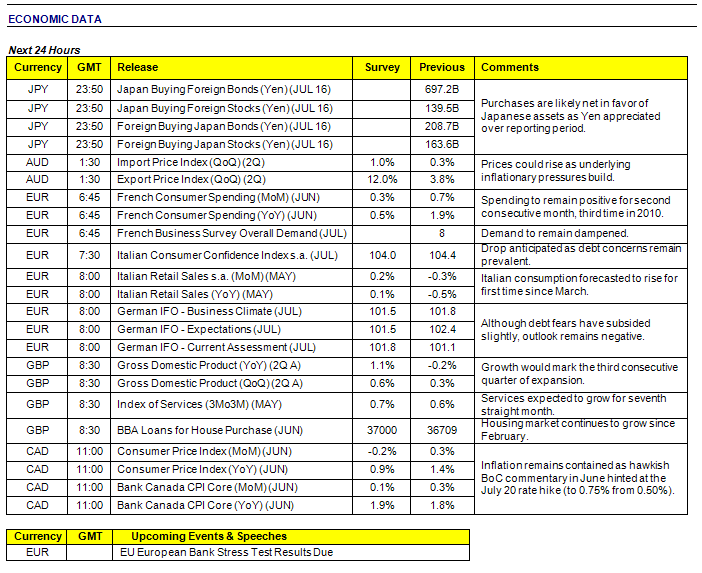 Dollar Gains Unwound as Volatility ahead of EU Stress Test Keeps Currency within Congestion
The dollar suffered its worst stumble in a week as risk appetite surged. What is important now is determining whether this particular move should be adopted into speculative expectations and trade decisions, or whether this is a market abnormality that has developed because of the distortion characterized by forthcoming event risk. Should we defer to the first assessment, the sharp advance in growth and yield-sensitive assets almost fully offsets the cumulative losses of the week and suggests a continuation of a dominant trend. Alternatively, should the session’s volatility and direction boil down to a side effect of the looming event risk of the coming 24 hours; today’s activity could be a throwaway because the reaction to the EU Stress Test could produce dramatically different outcomes. That being said, today’s activity will have a permanent effect on price action to some extent. With today’s activity, a few critical pairs have seen a significantly relief in speculative pressure. Among the most notable developments: EURUSD has pulled back into congestion rather than keeping the world’s most liquid pair on the cusp of a larger retracement of its two-month rally. Along similar lines, GBPUSD retraced back within congestion defined by the rising trend channel that began back in mid-May. And, perhaps the most dramatic result was the clear breakout from AUDUSD above 0.8850. On the other side of the coin, there are many securities that now find themselves on the threshold of trend-defining runs. USDCHF, USDJPY and USDCAD are notable examples; but more importantly for follow through, the S&P 500’s position just below 1,100 represents a market that is holding its breath to see what the next phase of sentiment and growth will bring.

Looking for the source of today’s rally, sentiment itself did not have a particular catalyst with which to run with. In fact, the general cut of the scheduled and unscheduled event risk would be considered a weight on the outlook under normal circumstances. For a global assessment of economic activity and market health: Japanese officials repeated concern over the volatility in exchange rates and the implications it has on vital trade; the IMF warned that the Euro-area economy would slow substantially over the next few years and listed significant steps that must be taken to promote stability; the BoE’s chief economists warned that the UK economy would suffer for its fiscal responsibility; and Fed Chairman Ben Bernanke maintained his outlook for uncertainty under the context of potential global troubles and domestic struggles with economic stimulation. And, for those that would point to the earnings data for the day as a definitive contribution to optimism, the figures were positive; but accounting for yesterday’s financial firms is arguably more important yet it ultimately contributed little to price action.

Having even less impact on investor confidence considering its outcome (though conforms to the dollar’s performance) was the day’s US data. While it may not be good for short-term volatility, the data is nonetheless an important assessment of medium-term economic performance. Confirming that housing is a considerable burden on the recovery and will continue to be, existing home sales dropped another 5.1 percent and inventory rose to a 10-month high. For a broader assessment of growth, the Leading Indicators composite fell for the second time in 15 months.

Euro Bull Trend Dependent on how the Market Interprets the Stress Test Results
We are coming down to the wire. The European Union is scheduled to publish the results of its Stress Test to a very eager market at 12:00 GMT. This is strategic timing for policy officials as it would be after the official close of European banks and is generally a period where liquidity is winding down for the weekend. For the markets, this will mean a dampened reaction to any surprises and a longer period for reflection. This is preferable from their perspective as it will cut down on immediate panics or euphorias. That being said, there is no way to curb the market’s interpretation altogether; and price action will roll over to Monday just as surely as it would erupt on Friday should it be a remarkable outcome. From the report, Bloomberg News has quoted a document from the CEBS whereby the group is working on three scenarios – one in which a “sovereign shock” would lead to the default of smaller private firms but not an actual nation. Traders will have to judge whether this assessment is transparent and critical enough of future circumstances to be considered useful. If it isn’t, the outcome could be as bad as a round of failures.

British Pound Beholden to Risk Trends but 2Q GDP Number Could Leverage Volatility
Today, the British pound was generally caught up in the bearing and intensity of risk appetite trends, with little attention paid to the second tier retail sales report for June (which consequently booked a stronger-than-expected 1.0 percent climb). For the final session of the week, responsibility for price action will be shared a little more evenly. A positive outcome for European financials will bode well for the UK. At the same time, the UK’s own 2Q GDP reading will be an integral update for the sterling itself and act as a proxy for growth in the industrialized world.

Canadian Dollar will be Torn Between Risk Trends and Data Friday just as it was Today
As a pseudo-high yield currency, the Canadian dollar is obliged to follow strong swings in risk appetite – like today’s. This is a fortunate association for loonie bulls as today’s retail sales figures for May unexpectedly accounted for the first back-to-back drop in consumption since the end of 2008. Tomorrow, risk will be set up against the interest rate defining CPI numbers. A pick up in core figures could keep hawks.

New Zealand Dollar Advances Despite Confidence Figures, Interest Rate Speculation Takes Over
Another commodity currency that would benefit from its positive relationship to risk trends, the New Zealand dollar was working against a significant drop in consumer confidence to an 11-month low. With a forecast set a little further than the next 24 hours of event risk, next week brings an RBNZ rate decision where a hike is expected. Will this indicator and European uncertainty affect the outcome?

Japanese Yen: The Call to Prevent the Yen’s Steady Appreciation Grows, What Happens if Risk Drops?
While we cannot confirm whether there is actual manipulation of the Japanese exchange rates, it is pretty clear that officials are attempting to verbally intervene. Keeping the ball rolling on their warnings of excessive volatility and appreciation for their currency, Vice Finance Minister Ikeda would echo the general sentiment that seems to stop short of FX intervention and BoJ efforts to boost stimulus. 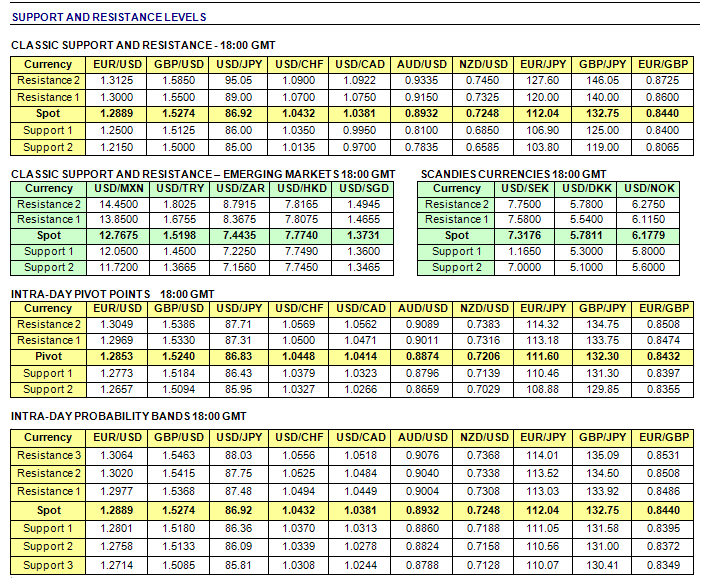 Written by: John Kicklighter, Currency Strategist for DailyFX.com
To receive John’s reports via email or to send Questions or Comments about an article; email jkicklighter@dailyfx.com