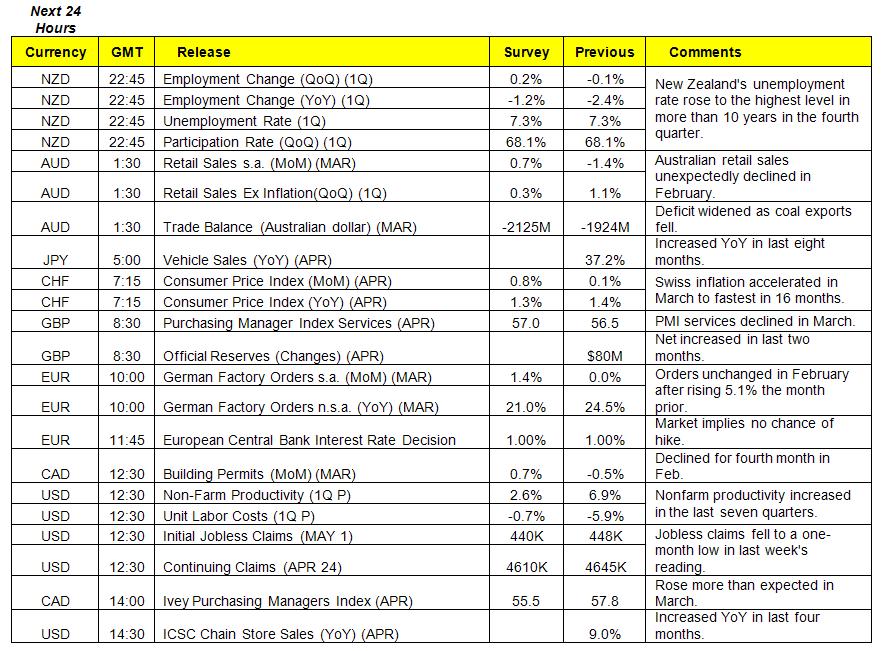 Another day for risk aversion as Greek debt fears rocks the markets. From the euro-region, fears that Greece’s debt crisis is spreading sent the markets into mayhem and ultimately led the euro to tumble to a fresh yearly low against the greenback. During the semi-annual report, the European Committee raised its 2010 forecast to 0.9% from 0.7% as European companies step up their output to meet reviving global demand. Dampening what seemed to be an improved outlook for the region, European Central Bank council member Axel Weber stated that “there is a threat of grave contagion effects for other member states in the monetary union and increasing negative feedback loop effects on capital markets.” At the same time, Moody’s Investors services said that it may cut Portugal’s credit rating as it sees deterioration of the country’s public finances. Through pure market mechanics, the burden that this uncertainty saddles the euro with would naturally benefit its most liquid counterpart. However, the greenback’s general appeal as a safe haven draws far more importance than its relationship to the euro.

After falling the most in three months yesterday, global equity markets continued their southern journey as concerns that European government debt levels will derail the global recovery looms, overshadowing evidence that the U.S. economic recovery is being sustained. The growing concern over sovereign debt risk is sure to diminish the appeal of government bonds which are benchmarks of currencies as other securities such as those in commodities offer a somewhat greater level of solidity. It is noteworthy that the U.S. should not be counted out of the group of weakening sovereign economies as the S&P recently whispered that its outlook for the world’s largest economy remains negative.

As for the economic docket during the North American trade, an index of mortgage application in the U.S, to the highest level in seven months during the week ending April 30th. The improved reading is largely attributed to Americans rushing to sign contracts ahead of the deadline for the homebuyer’s tax credit which required contracts to be signed by April 30th and settled by June 30th.  The docket also showed that job cuts announced by U.S. employers for the world’s largest economy tumbled 71.1% in April after declining 55.0% the previous month, a signal that the labor market is strengthening as the economy recovers, and employers gain confidence about conditions going forward. Looking ahead to tomorrow, the economic docket is relatively light; but the Nonfarm productivity index could play a unique role. Nevertheless, unit labor costs are expected to retreat 0.7% in the first quarter, while initial jobless claims are forecasted to jump to 440K for the week ending May 1st.

Related: Discuss the US Dollar in the DailyFX Forum

Euro Weakens Across the Board Amid Greek Contagion Fears
The euro weakened across the board for the third straight day on Wednesday as fears over Greece’s debt crisis continues to shake the markets after ECB council member stated that there is a threat of “grave contagion effects,” while Moody’s Investors Service warned that it may cut Portugal’s debt rating.

British Pound Extends Three Decline Ahead of Thursday’s Election
The British pound continued its southern journey ahead of tomorrow’s election despite conduction expanding at its fastest pace since September. Britain’s government debt was yet again place into the spotlight as fear of Greece’s fiscal crisis linger, while market participants prepare for a hung parliament.

Australian Dollar Declines for a Second Day on the Back of Risk Aversion
The Australian dollar broke below the 100-day SMA to a fresh weekly low of 0.9021 as risk appetite diverged investors away from the high yielding currency.

Canadian Dollar Weakend for a Second Straight Day as Markets Await Employment Data
The Canadian dollar weakend for a second day ahead of Friday’s net change in employment report which is forecasted to jump 25.0K in April after climbing 17.9K the previous month.The currency has been the third-best performer this year among the U.S. dollar’s 16 most-traded counterparts on speculation that Canada’s central bank will raise borrowing costs either at the next meeting on June 1 or the meeting following.