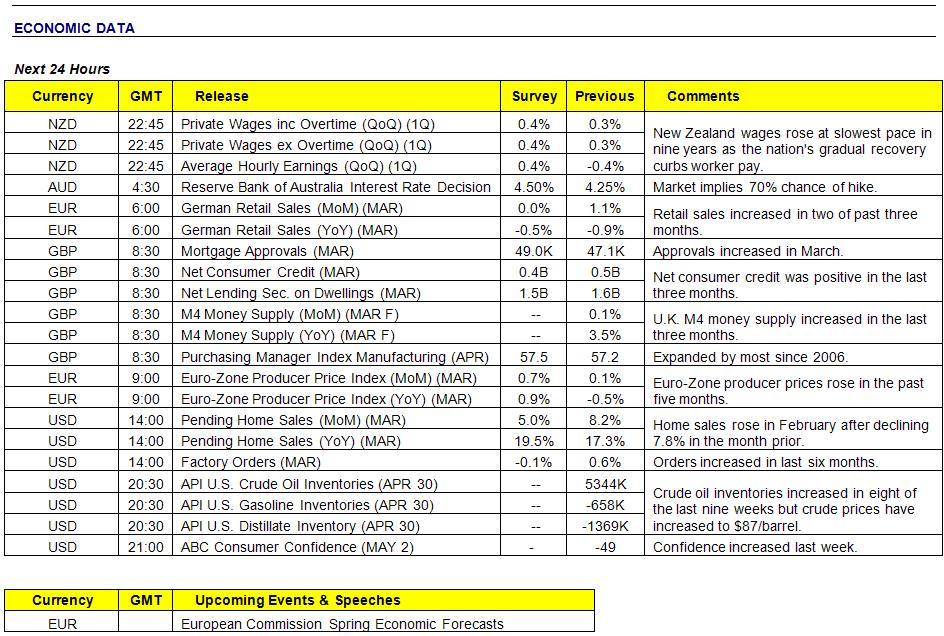 U.S. Dollar Mixed as Traders Scale Back Their Appetite for Risk

Dollar Mixed as Traders Scale Back Their Appetite for Risk
The U.S. Dollar price was mixed amongst the major currencies on Monday as investors scaled back their appetite for risk and reverted to safety-linked currencies despite Euro-region governments announcing a $146 billion Greek bailout plan yesterday. However, the prolonged bailout maybe too late as investors become concerned that the lifeline awarded to Greece will fail to stem market contagion in euro-area nations such as Spain and Portugal which recently had their credit ratings downgraded by the Standard & Poor’s rating agency last week. Despite the possibility of the crisis in Athens spreading to other countries, other questions for Greece still arise, one being, can Greece meet the austerity measures? What the European governments seemed to have done is thrown money at the fiscal issue; however, all that the injected money is doing is delaying the overlying issue. As for the greenback, a somewhat busy economic calendar had comparatively a modest effect on the domestic currency.

Consumer spending in March advanced 0.6% after climbing a revised 0.5% in February – in line with consensus forecasts, and pointing to a recovery that may accelerate when the economy creates more jobs as the Fed projects the unemployment rate to fall to 9.6% by the end of the year from the its current level of 9.7%. The report highlights an improved outlook for the region as consumers become more willing to consume, an indication that spending may contribute more to the expansion in the coming months as incomes advance. Nevertheless, the Fed’s preferred price measure added 0.1% in March, while the annualized reading jumped 1.3%. Because spending rose at a faster pace than incomes, the savings rate in turn retreated 2.7%, posting the lowest level since September 2008. The subsequent ISM manufacturing report takes on additional significance in light of the recent Nonfarm Payrolls data as figures showed that manufacturing expanded at the fastest pace since June 2004, a signal that the world’s largest economy maybe pointing towards further gains in employment.

Looking ahead to tomorrow, the economic docket is relatively light; but the ABC consumer confidence could play a unique role. Nevertheless, factory orders are expected to retreat 0.1% for month of March, while pending home sales are forecasted to climb 4.0% during the same period. Friday’s NFP’s on the other hand may promise less volatility; but timing is indisputable.

Related: Discuss the US Dollar in the DailyFX Forum, US Dollar Strength Depends on Nonfarm Payrolls, Euro Zone Resolution

Euro Weakens Across the Board Despite $146 Billion Greek Bailout
The euro weakened across the board as Greece pledged to push through 30 billion euros ($40 billion) of budget cuts, equivalent to 13 percent of gross domestic product, in return for loans at a rate of around 5 percent for three years, leading investors to scale back risk appetite amid concerns that the EU bets on Greece will not be enough to avert contagion. The single currency initially rose during early market trading in response to the record bailout for Greece. However, it surrendered its gains on lingering doubts over whether Athens will be able to successfully implement its tough measures to stabilize the country's finances given strong public backlash. Looking ahead to tomorrow, the economic docket is relatively light; Euro-zone Producer Price Index is due, along with the European Commission Report on Spring Economic Conditions.

British Pound Extends Friday’s Decline Ahead of Thursday’s Election
The British pound extended Friday’s decline ahead of Thursday’s election as uncertainty is itself unnerving, while the government debt was placed into the spotlight amid increased concern that Greece’s fiscal crisis would soon spread to other euro-area members. In turn, this would aggravate the UK’s own sovereign credit concerns in the process.

Australian Dollar Holds Narrow Range Leading Up to Rate Decision
The Australian dollar continued to trade within the congested area of 0.9340 – 0.9150 for the eleventh straight day as traders await for the comments following the RBA rate decision tomorrow which is scheduled to be released at 4:30 GMT. The market is pricing in a 70 percent probability of a twenty five basis point rate hike to 4.50%, and hawkish comments following the groups rate decision will drive the Aussie higher, however, if the central bank adopts a neutral policy stance in the second half of the year, the currency may face increase selling pressure.


Canadian Dollar Pares Friday’s Gains as Markets Await Employment Data
Canada’s dollar rose versus the greenback as crude oil approached $87 a barrel and gold touched the highest level since December.   The currency has been the third-best performer this year among the U.S. dollar’s 16 most-traded counterparts on speculation that Canada’s central bank will raise borrowing costs either at the next meeting on June 1 or the meeting following. Going forward – the most significant data is due on Friday, with the Net Change in employment expected to rise 25.0K in April after climbing 17.9K in March.  Both are significant pieces to gauge the timing for rake hikes from the BOC.


**For a full list of upcoming event risk and past releases, go to www.dailyfx.com/calendar