EUR: The Euro is outperforming this morning following reports that Italy and the EU had reached an agreement on the 2019 budget with the EU deciding to not go ahead with the excessive debt procedure. However, once again EURUSD has failed to maintain a foothold above the 1.14 handle. Eyes will be on the Federal Reserve rate decision where markets are pricing in a dovish rate hike.

USD: Another day, another drop in the US Dollar against its major counterparts. Focus is on the Federal Reserve rate decision where it is expected that Powell and Co. will raise rates for a fourth time this year. However, much of the attention will be placed on the accompanying statement and the dot plot projections. Expectations are for the Fed to drop language surrounding further gradual increases and instead place emphasis on data dependence, while the dot plot projection may signal 2 2019 rate hikes from 3 previously.

CAD: The Canadian Dollar is relatively flat and somewhat unfazed by the softer inflation report. As expected, headline inflation saw a sizeable drop given the plunge in oil prices and thus missed market expectations. Alongside this, the Bank of Canada’s preferred core metric dropped to 1.9% from 2.0%, consequently, keeping the outlook bleak for the Canadian Dollar. Market reaction had been somewhat tame given that the drop-in inflation had largely been expected with the BoC stating that they see downside risks to inflation in the foreseeable future. While investors are also awaiting the release of the Fed rate decision. 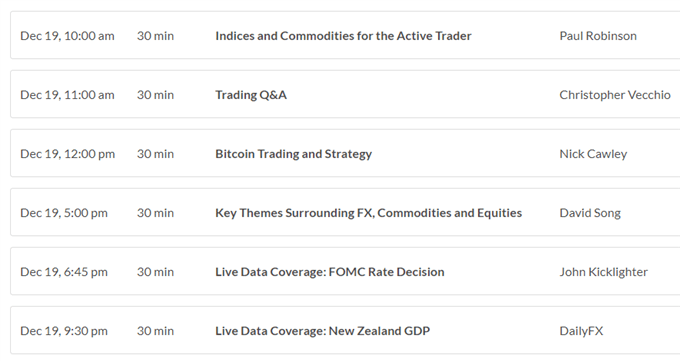