AUD: The Australian Dollar, which is typically seen as a proxy for China is among the best performing currencies this morning, after President Trump and Xi agreed to hold off on implementing further tariffs. In reaction, the Australian Dollar gapped higher to trade at the highest level since August, however, the currency just should of the 0.74 handle. As risk markets remain buoyed, the outlook for AUD is modestly bullish. Resistance situated at 0.7450.

CAD: he Canadian Dollar has surged against the greenback with USDCAD shedding 0.9%. Among the main factors behind the bid in the Loonie was on reports that Canada would take unprecedented measures through reducing oil production in Alberta by 9% (roughly 325kbpd), in a bid to ease the supply glut of Canadian crude. This in turn, has seen Western Canadian Select oil jump 10%. Alongside this, oil prices have received a boost as Russia and Saudi Arabia stated that they will extend cooperation, consequently increasing expectations that a cut will be announced at this week’s OPEC. Oil prices will likely continue to dictate price action in CAD throughout the upcoming week.

GBP: Initial gains in the currency had been pared as Brexit uncertainty continues to dictate price action for the Pound. As it stands, expectations are for UK MPs to vote down Theresa May’s Brexit plan (Potential scenarios). Consequently, this has kept a lid on any gains in the currency, which is now looking to break below 1.27 and test the YTD lows (1.2662)

Crude oil: Supply cuts have seen oil prices lead the charge in the commodity space with Russia and Saudi Arabia agreeing to extend their cooperation into 2019, which in turn has increased expectations that OPEC will curb production at the December 6th meeting. While Canada announced that they will cut production in Alberta region by 325kbpd in order to ease their own domestic supply glut. Alongside this, the boost in risk sentiment amid reduced trade tensions has helped Brent and WTI extend on gains. 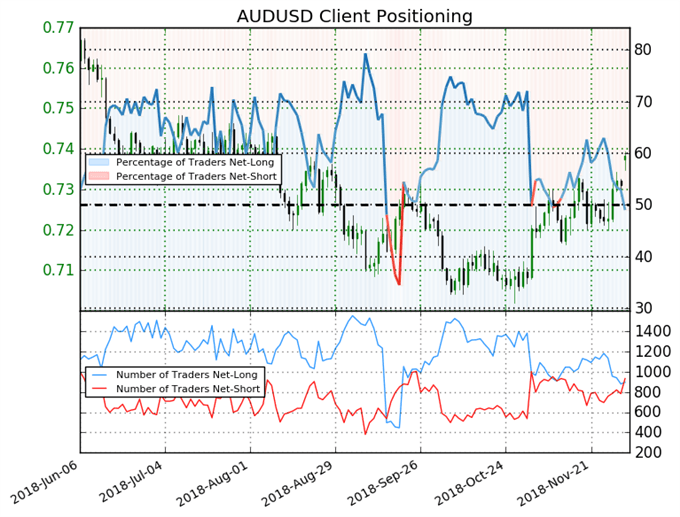 We typically take a contrarian view to crowd sentiment, and the fact traders are net-short suggests AUDUSD prices may continue to rise. Traders are further net-short than yesterday and last week, and the combination of current sentiment and recent changes gives us a stronger AUDUSD-bullish contrarian trading bias.