US equity futures are showing modest gains this morning (DJIA +0.1%, Nasdaq 100 +0.4%, S&P 500 +0.3%) as the Bank of Japan prepare for QE infinity by pushing back the time it will take to hit its inflation target yet again. Alongside this, markets are bracing themselves for the earnings from Apple, whereby if they see a 6.5% increase in share price they will reach the $1tln mark.

** US and China are said to restart talks in order to defuse trade war. In reaction to these reports moments ago, USDCNH fell to session lows, with the USD also taking a slight hit, while gold prices edged higher.

JPY: Overall, the Bank of Japan were dovish, which sparked a rally in JGBs, while the JPY weakened. The BoJ pushed back their expectation of when Japan will reach the 2% target beyond the 2018-20 forecast horizon. The central bank also added forward guidance by stating that policy rates will be kept for an “extended period of time”, while in regard to yields the BoJ noted that yields may rise up or down to some extent. Consequently, this dampened the hawkish expectation from recent media outlets, which in turn weigh on the Japanese Yen with the Nikkei 225 bolstered.

USD: Month end rebalancing seemingly dictating the price action for the US Dollar for much of the morning, in which various bank models have suggested strong USD selling against its major counterparts. Eyes will be on the London fix at 1500GMT where the bulk of the price action tends to take place. Elsewhere, US data had slightly softened with price pressures easing, according to the latest PCE figures, while wage growth metrics had also slipped.

Selling in the USD looks to have been curbed with today marking another redemption day as the Federal Reserve continues to unwind its balance sheet. Typically, days that have a large and negative impact on USD liquidity have coincided with USD strength of around 0.3%. Today, the Federal Reserve’s balance sheet unwind will lead to the largest negative net liquidity of around $24bln and as such could potentially provide a boost for the USD.

EUR: Eurozone Inflation data printed ahead of expectation with both the headline and core readings, albeit the latter is still some way from reaching the ECB’s target. This will provide the ECB with confidence that inflation is moving in an upward trajectory towards their target and further reinforce the view that the ECB can be less accommodative. However, the first look at the Q2 GDP report missed expectations, which will likely be a disappointment for the ECB who would have expected a rebound from the weakness seen in Q1. Key resistance ahead in EURUSD with the descending trendline from the ECB June decision high (1.1850) capping gains.

CAD: Overnight, the Canadian Dollar weakened following reports that Canada has been rejected from talks with the US and Mexico on NAFTA, consequently raising concerns that the US may opt for a bilateral deal as opposed to a trilateral agreement. However, losses had been pared with USDCAD briefly dipping below 1.30 after a strong GDP report in which the monthly reading rose to its best level in a year. 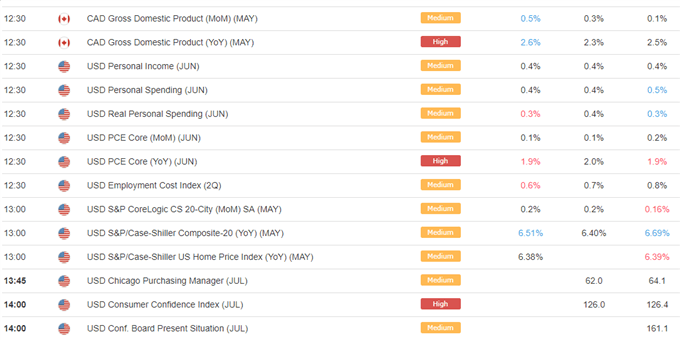 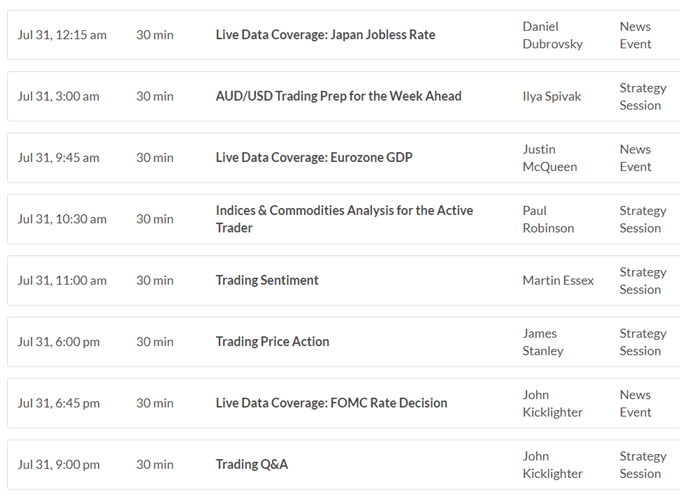