The Reserve Bank of Australia (RBA) interest rate decision may shake up the near-term outlook for AUDUSD as the central bank is widely expected to cut the official cash rate (OCR) to a fresh record-low of 1.25%.

The RBA looks poised to further insulate the economy as the trade dispute between the U.S. and China, Australia’s largest trading partner, dampens the outlook for global growth, and the central bank may implement lower interest rates throughout the remainder of the year as official insist that “without an easing in monetary policy over the next six months, growth and inflation outcomes would be expected to be less favourable than the central scenario.”

In turn, a 25bp rate-cut paired with a batch of dovish rhetoric is likely to drag on AUDUSD as Governor Philip Lowe & Co. reestablish the rate easing cycle and push monetary policy into uncharted territory.

However, the RBA may stick to the sidelines as recent updates to Australia’s Employment report suggest discourage workers are returning to the labor force, and more of the same from Governor Lowe & Co. may trigger a bullish reaction in AUDUSD as the central bank remains in no rush to implement lower interest rates.

The Reserve Bank of Australia (RBA) kept the official cash rate (OCR) at 1.50% in May despite speculation for a 25bp rate-cut, and it seems as though the central bank will retain the current policy for the foreseeable future as officials pledge to pay “close attention to developments in the labour market at its upcoming meetings.”

However, the RBA appears to be change its tune as “the inflation data for the March quarter were noticeably lower than expected,” and it may be just a matter of time before the central bank reestablishes its rate easing cycle as “a further improvement in the labour market was likely to be needed for inflation to be consistent with the target.”

The Australian dollar gained ground as the RBA stuck to the sidelines, with AUD/USD climbing above the 0.7000 handle to close the day at 0.7012. Learn more with the DailyFX Advanced Guide for Trading the News. 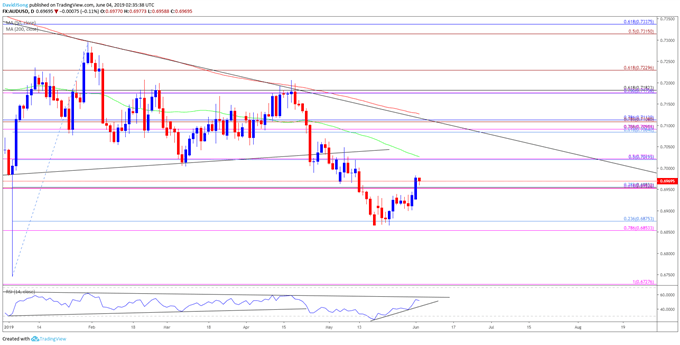