Fresh data prints coming out of the euro-area may trigger a bullish reaction in EUR/USD as updates to Germany’s Gross Domestic Product (GDP) report are anticipated to show a pickup in economic activity.

Europe’s largest economy is expected to grow 0.4% after holding flat during the last three-months of 2018, and a positive development may encourage the European Central Bank (ECB) to adopt an improved outlook for the monetary union as the ‘new series of TLTROs that we announced in March, will help to safeguard favourable bank lending conditions and will continue to support access to financing, in particular for small and medium-sized enterprises.’

In turn, the Governing Council may largely endorse a wait-and-see approach at the next meeting on June 6, and more of the same from President Mario Draghi & Co. may help to heighten the appeal of the Euro as the central bank shows little to no interest in conducting another round of quantitative easing (QE).

However, a dismal GDP report may drag on EUR/USD as it raises the risk for a euro-area recession, and the ECB may come under pressure to further support the monetary union as the central bank struggles to achieve its one and only mandate for price stability.

Economic activity in Germany was flat during the last three-months of 2018, with the Europe’s largest economy barely skirting a recession following the 0.2% contraction in the third-quarter of the year. The details of the report showed Private Consumption adding 0.1% to the GDP reading, with government spending contributing 0.3%, while inventories narrowed 0.6% in the fourth-quarter.

The mixed data prints sparked a limited reaction in the Euro, with EUR/USD consolidating throughout the day to close at 1.1294. Learn more with the DailyFX Advanced Guide for Trading the News. 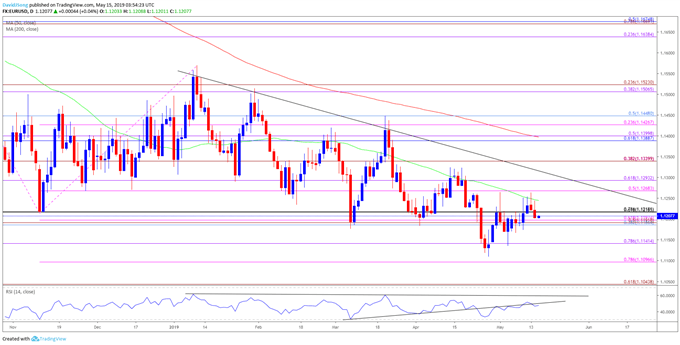