Updates to the U.K. Gross Domestic Product (GDP) report may spark a near-term rebound in GBP/USD as the growth rate is expected to increase 1.8% after expanding 1.4% per annum during the last three-months of 2018.

Signs of a resilient economy may push the Bank of England (BoE) to further embark on its hiking-cycle as ‘the Committee continues to judge that, were the economy to develop broadly in line with its Inflation Reportprojections, an ongoing tightening of monetary policy over the forecast period, at a gradual pace and to a limited extent, would be appropriate to return inflation sustainably to the 2% target at a conventional horizon.’

In turn, a GDP reading of 1.8% or higher may spark a bullish reaction in the British Pound as it boosts bets for a BoE rate-hike, but a below-forecast print may keep GBP/USD under pressure as it puts pressure on Governor Mark Carney and Co. to drop the hawkish forward-guidance for monetary policy.

Impact that the U.K. GDP report had on GBP/USD during the previous release

The U.K. economy grew 1.3% during the last three-months of 2018 after expanding 1.5% during the previous period, with the gauge for Private Consumption increasing 0.4% for the second consecutive quarter. A deeper look at the report showed business investments contracting 1.4% to mark the biggest decline since 2016, while Government Spending climbed 1.4% in the four-quarter amid forecasts for a 0.5% rise.

The British Pound struggled to hold its ground following the below-forecast GDP print, with GBP/USD slipping below the 1.2900 handle to close the day at 1.2853. Learn more with the DailyFX Advanced Guide for Trading the News. 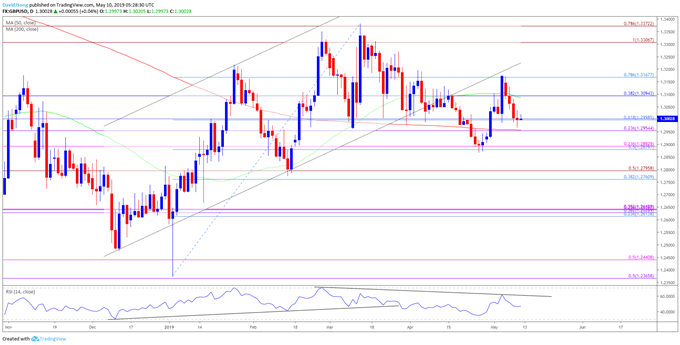