The Reserve Bank of New Zealand (RBNZ) interest rate decision may trigger a selloff in the NZD/USD exchange rate as the central bank is expected to cut the official cash rate (OCR) to a fresh record-low of 1.50%.

The recent shift in the forward-guidance for monetary policy have spurred bets for lower interest rates as Governor Adrian Orr & Co. warn that ‘the more likely direction of our next OCR move is down,’ and it seems as though the central bank will take additional steps to insulate the economy as ‘the risk of a more pronounced global downturn has increased.’ In turn, NZD/USD stands at risk of giving back the rebound from the November-low (0.6514) should the RBNZ deliver a 25bp rate-cut paired with a dovish forward-guidance for monetary policy.

However, the RBNZ may merely attempt to buy more time as officials expect ‘low interest rates, and increased government spending and investment, to support economic growth over 2019,’ and more of the same from the central bank may spark a short-term pop in the New Zealand dollar as market participants scale back bets for an imminent rate-cut.

As expected, the Reserve Bank of New Zealand (RBNZ) kept the official cash rate (OCR) at the record-low of 1.75% in March, but altered the forward-guidance for monetary policy, with Governor Orr & Co. warning that ‘the more likely direction of our next OCR move is down.’

It seems as though the RBNZ will continue to change its tune over the coming months as ‘the risk of a more pronounced global downturn has increased,’ and the central bank may prepare New Zealand households and businesses for an imminent rate-cut as officials abandon the wait-and-see approach for monetary policy.

The New Zealand dollar sold off as the RBNZ endorsed a dovish outlook, with NZD/USD quickly tumbling below the 0.6900 handle to close the day at 0.6797. Learn more with the DailyFX Advanced Guide for Trading the News. 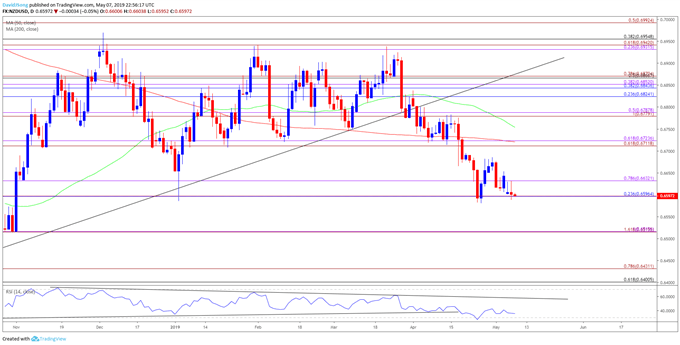