Australia’s Gross Domestic Product (GDP) report may produce a bearish reaction in AUD/USD as the growth rate is expected to increase 2.6% after expanding 2.8% per annum during the three-months through September.

Evidence of a slowing economy may push the Reserve Bank of Australia (RBA) to alter the forward-guidance for monetary policy as Governor Philip Lowe warns that ‘there were significant uncertainties around the forecasts, with scenarios where an increase in the cash rate would be appropriate at some point and other scenarios where a decrease in the cash rate would be appropriate.’ In turn, another below-forecast GDP print may drag on AUD/USD as it encourages the RBA to further support the economy, with the exchange rate at riskexhibiting a more bearish behavior over the coming days as it trades near the February-low (0.7054).

However, a positive development may heighten the appeal of the Australian dollar as it puts pressure on Governor Lowe & Co. to lift the official cash rate (OCR) off of the record-low, and an above-forecast GDP may spur a rebound in the exchange rate as it sparks bets for an RBA rate-hike. Sign up and join DailyFX Currency Analyst David Song LIVE for an opportunity to discuss potential trade setups.

Updates to Australia’s Gross Domestic Product (GDP) report showed economic activity increasing 2.8% per annum in the third-quarter of 2018 after expanding a revised 3.1% during the three-months through June.

The remarks suggest the RBA is in no rush to alter the monetary policy outlook as ‘the low level of interest rates is continuing to support the Australian economy,’ and it seems as though the central bank will stick to the wait-and-see approach over the coming months ‘the central scenario is for the Australian economy to grow by around 3 per cent this year and by a little less in 2020 due to slower growth in exports of resources.’

Nevertheless, the lack of dovish comments generated a bullish reaction in the Australian dollar, with AUD/USD advancing from the 0.7200 handle to close the day at 0.7233. Learn more with the DailyFX Advanced Guide for Trading the News. 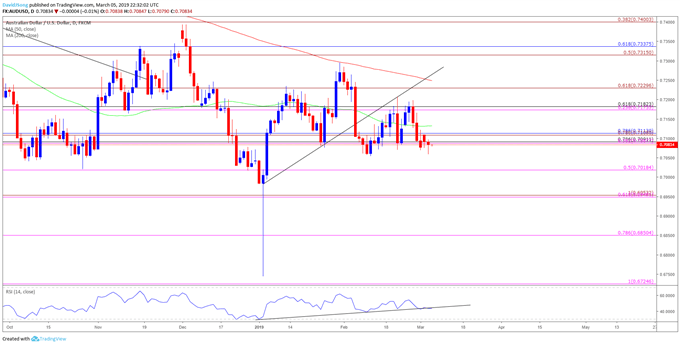