The Reserve Bank of New Zealand’s (RBNZ) first meeting for 2019 may do little to curb the recent weakness in NZD/USD as the central bank is widely expected to keep the official cash rate (OCR) at the record-low of 1.75%.

Like the Reserve Bank of Australia (RBA), the RBNZ may show a greater willingness to further support the economy amid the weakening outlook for the Asia/Pacific region, and the central bank may continue to tame bets for higher interest rates as ‘business surveys continue to suggest growth will be soft in the near term..’

As a result, dovish comments from Governor Adrian Orris likely to produce a bearish reaction in NZD/USD, but a sudden shift in the forward-guidance may heighten the appeal of the New Zealand dollar as market participants boost bets for an imminent RBNZ rate-hike. Sign up and join DailyFX Currency Analyst David Song LIVE for an opportunity to discuss potential trade setups.

The Reserve Bank of New Zealand (RBNZ) stuck to the sidelines at its last meeting for 2018, with the central bank keeping the official cash rate (OCR) at the record-low of 1.75%. The fresh remarks suggest the RBNZ will continue to endorse a wait-and-see approach in 2019 as Governor Orr & Co. pledges to ‘keep the OCR at an expansionary level for a considerable period.’

The initial spike in NZD/USD was short-lived, with the New Zealand dollar grinding lower throughout the day to close at 0.6754. Learn more with the DailyFX Advanced Guide for Trading the News. 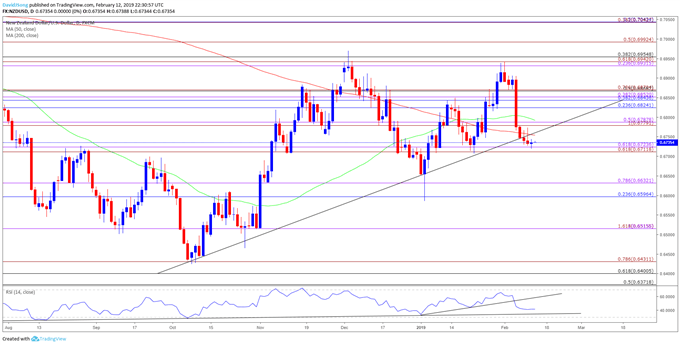