Updates to Canada’s Employment report may do little to curb the recent strength in USD/CAD as the economy is anticipated to add a meager 5.0K jobs in January, while the Unemployment Rate is expected to increase to 5.7% from 5.6% per annum the month prior.

nother lackluster employment report may ultimately produce headwinds for the Canadian dollar as it dampens the outlook for growth and inflation, and signs of slowing job growth may keep the Bank of Canada (BoC) on the sidelines as the central bank’s ‘revised forecast reflects a temporary slowing in the fourth quarter of 2018 and the first quarter of 2019.’

In turn, a print of 5.0K or less may fuel the recent advance in USD/CAD as it encourages the BoC to buy more time at the next meeting on March 6, but a better-than-expected employment report may spark a bullish reaction in the Canadian dollar as it puts pressure on Governor Stephen Poloz & Co. to further normalize monetary policy over the coming months. Sign up and join DailyFX Currency Analyst David Song LIVE for an opportunity to discuss potential trade setups.

Canada Employment increased 9.3K jobs in December after expanding a revised 78.4K the month prior, while the jobless rate held steady at 5.6% per annum despite forecasts for a 5.7% print. A deeper look at the report showed the Participation Rate also holding steady at 65.4% during the same period, with the rise in job growth led by a 28.3K expansion in part-time positions, while full-time employment narrowed 18.9K in December.

The Canadian dollar struggled to hold its ground following the lackluster employment report, but the initial reaction was short-lived, with USD/CAD slipping below the 1.3400 handle to close the day at 1.3371. Review the DailyFX Advanced Guide for Trading the News to learn our 8 step strategy. 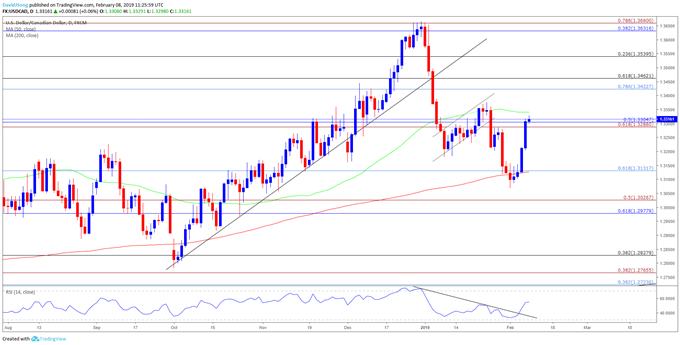