The Reserve Bank of Australia’s (RBA) first meeting for 2019 may fuel a larger pullback in AUD/USD as the central bank is expected to keep the official cash rate (OCR) at the record-low of 1.50%.

It seems as though the RBA has little to no interest in adjusting the forward-guidance for monetary policy as ‘the low level of interest rates is continuing to support the Australian economy,’ and Governor Philip Lowe & Co. may continue to buy more time amid ‘some signs of a slowdown in global trade, partly stemming from ongoing trade tensions.’

With that said, more of the same from the RBA may keep AUD/USD under pressure especially as the U.S. Non-Farm Payrolls (NFP) report puts pressure on the Federal Reserve to further normalize monetary policy, but an unexpected batch of less-dovish rhetoric may trigger a bullish reaction in the Australian dollar as the RBA insists that ‘the next move in the cash rate was more likely to be an increase than a decrease.’ Sign up and join DailyFX Currency Analyst David Song LIVE for an opportunity to discuss potential trade setups.

As expected, the Reserve Bank of Australia (RBA) stuck to the sidelines at its last meeting for 2018, with the central bank keeping the official cash rate (OCR) at the record-low of 1.50% as ‘the Board judged that holding the stance of monetary policy unchanged at this meeting would be consistent with sustainable growth in the economy and achieving the inflation target over time.’ The comments suggest the RBA remains in no rush to alter the monetary policy outlook as ‘inflation remains low and stable,’ and the central bank may continue to tame bets for an imminent rate-hike as ‘growth in household income remains low, debt levels are high and some asset prices have declined.’

AUD/USD bounced back from the 0.7355 region even as the RBA endorsed a wait-and-see approach for monetary policy, but the reaction was short-lived, with the aussie-dollar exchange rate giving back the advance to close the day at 0.7337. Learn more with the DailyFX Advanced Guide for Trading the News. 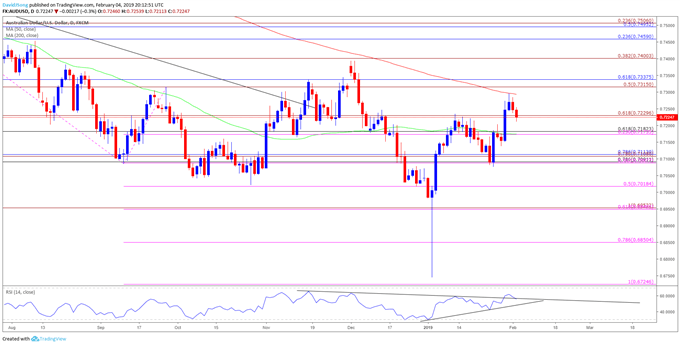